‘Kalank’ is a Period Drama of Eternal Love

The film ‘Kalank’ has an ensemble cast including Sanjay Dutt and Madhuri Dixit who reunite after more than twenty years. DESIblitz previews the magnum opus.

The concept of Kalank (2019) was the brainchild of the late Yash Johar and his son Karan Johar, about fifteen years ago.

As per reports, the late director-producer had gone to Pakistan to see the localities and then intricately recreate them for the film. The film stayed in the backburner, gathering dust for a long time till Karan decided to revive it in 2018.

The pre-production work began at a rapid pace. Amrita Mahal earnestly started erecting the necessary structures and sets for the film.

An entire set with intricate designs representing old Delhi was put up in Mumbai’s Film City. The estimated costs for the set was around Rs.15 crores (£1.6 million).

Abhishek Varman, the director of the Arjun Kapoor-Alia Bhatt starrer 2 States, is directing the periodical drama. Sajid Nadiadwala became part of the team as the producer. He presented the first clapshot of Kalank along with Karan.

Shooting for the introduction song came to a finish on May 7, 2018. The song features Varun Dhawan, Kiara Advani and Alia Bhatt as well as over 490 backup dancers.

Alia Bhatt made an announcement that the shooting for Kalank came to an end on Jan 9, 2019. The budget estimate of Kalank is about Rs. 80 crores (£8.8 million). 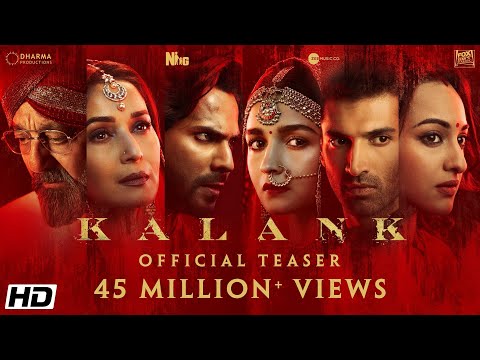 A teaser of the film released on March 12, 2019. It garnered millions of views on YouTube on the first day itself.

Kalank was all set to release on April 19, 2019. But the release date has come forward to take advantage of the holidays. Kalank will now hit the theatres in India on April 17, 2019. 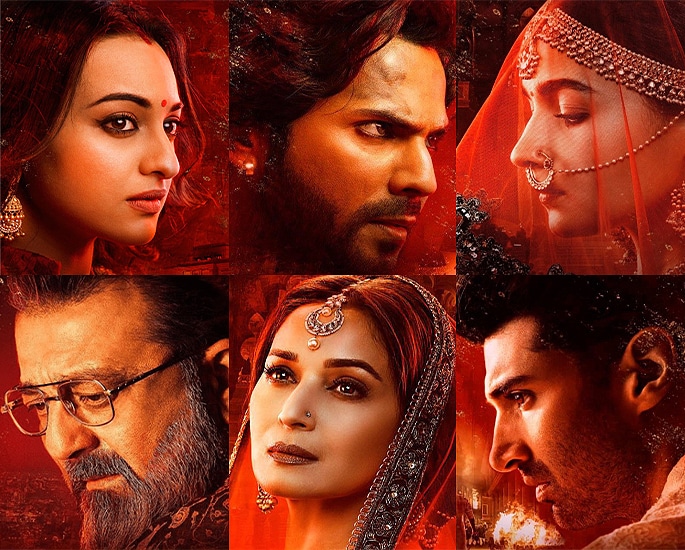 Kalank will be the fourth pairing of Alia and Varun on the big screen, after Student of the Year (SOTY: 2012), Badrinath Ki Dulhania (2017) and Humpty Sharma Ki Dulhania (2014).

Late Sridevi was the initial choice for the role of Bahaar Begum. But Madhuri Dixit came into replacing her on May 31, 2018.

A few stills from the film unintentionally came out in the open during June 2018. The stills show Madhuri in an Anarkali dress with expansive ornate jewellery.

Going by the photos, Madhuri may probably be enacting the role of a courtesan. There is also a rumour that she may be playing a dance teacher’s role.

Actress Sonakshi Sinha came into the fold as Satya Chaudhry in June 2018. She plays the female lead opposite Kapur. She only shot for fifteen days for the film.

Sanjay Dutt plays the role of Balraj Chaudhry. The first look posters of all the main actors and their characters released in early March 2019.

Pritam is the music director, whilst Amitabh Bhattacharya is the lyricist of Kalank. Zee Music Company owns the music rights to the film.

Some of the singers in Kalank include Arijit Singh, Shreya Ghoshal, Darshan Raval, Hriday Gattani, Mohit Chauhan and Harshdeep Kaur.

Binod Pradhan is the cinematographer, with Shweta Venkat Mathew the editor.

The Driving Force – The Story 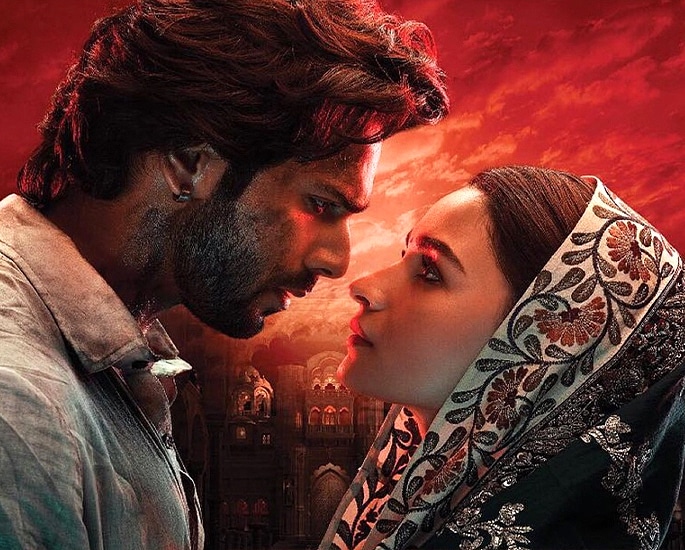 Despite the Johar family conceptualising the film, Shibani Bathija is the story writer of Kalank.

Kalank is a historical drama that goes back to pre-1947 India. It tells the story of a well to do family and the numerous secrets that each holds.

As India draws nearer to independence and partition, along with increasing communal tensions, each of those hidden facts begins to unravel.

The love of the four main characters played by Varun, Alia, Aditya and Sonakshi get embroiled in the violence and strife that is all around.

With the main theme of Kalank being red, the colour may reflect triumph, love, bloodshed or hatred.

During the shoot in Kargil, Varun visited the Kargil War Memorial. He later posted on Instagram.

“At the KARGIL WAR MEMORIAL. #kalank travel. Was an honour to chat with our brave army men.” 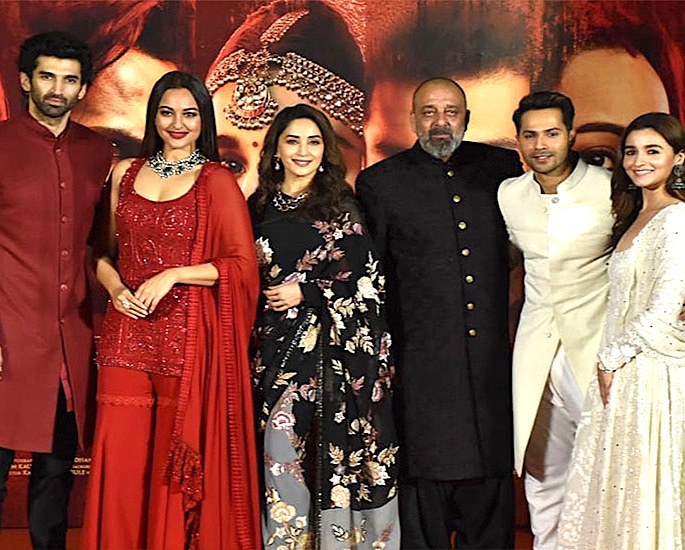 One of the posters of Kalank shows a brooding Sanjay sitting grimly in his car on a rainy night, with a cigar in hand, and looking out the window. Sanjay subsequently tweeted:

This shows that he may be playing a quiet brooding man.

Varun was injured whilst shooting one of the scenes in the film. He, however, did not stop the shoot and finished the monsoon schedule.

During an Instagram banter with Sonakshi, Varun called her ‘bhabhi’. This means that Kapur may be portraying the role of Dhawan’s brother in the movie.

In 2019, there was a huge storm on social media where fans pointed out that the background score of Kalank is a direct copy of The Flash (2014-present) television show.

The film shooting took place in locations all over India, including Gwalior, Indore and even Kargil.

Aditya Roy Kapur who likes working out and has a muscled body had to let go of his gym routine to get a lean body look for Kalank.

There are reports that the title of the film was initially called Shiddat. 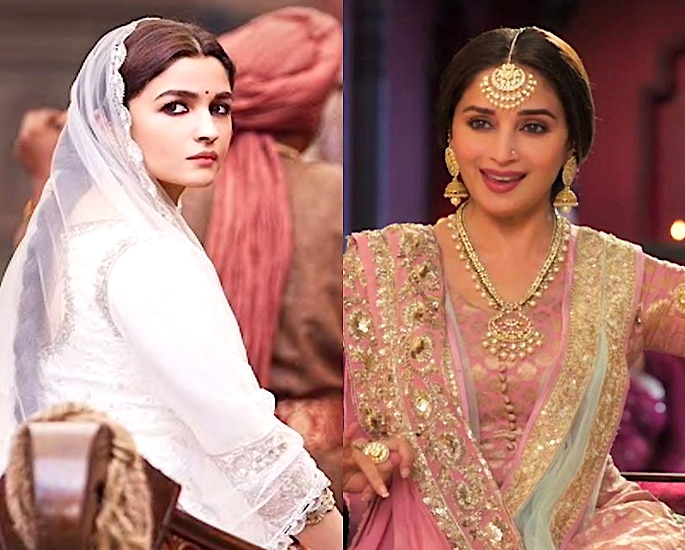 Energetic, magical and colourful songs of Kalank had released earlier. The song ‘First Class’ marks the entry of Varun Dhawan aka Zafar in the film.

Whilst Arijit Singh and Neeti Mohan are the singers, Remo D’Souza has done the choreography. Sharing the song on his twitter account, Varun expresses his gratitude to Arjit for this high spirited song.

“MASS! First Class! Thank you, to everyone behind this song I’m so happy Arijit has sung a mass number for me after Palat.“

For the track, ‘Ghar More Pardesiya’ there is a Kathak dance duet between Alia and Madhuri in the film. Alia underwent training to perfect her classical dancing skills.

Whilst speaking to the media on the Kalank teaser launch, Alia stated that initially, she could not believe that she was shooting with the ‘Dhak Dhak Girl’. She said:

“I sometimes used to pinch myself to see whether it was all true.”

Alia even used to zone out and stare at lovely Madhuri during the shoot. 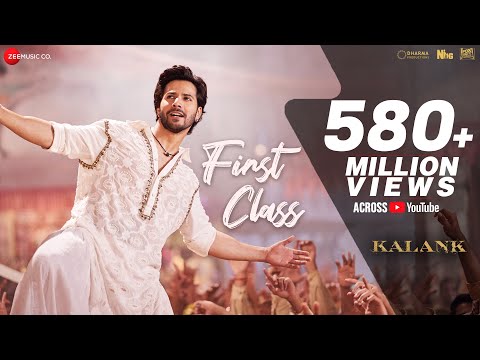 From the time it was announced, Kalank has been one of the most anticipated films. The multi-starrer has regularly grabbed the headlines, keeping up the audience interest.

It remains to be seen whether Sanjay Dutt and Madhuri Dixit will be able to recreate their chemistry and magic of the 1990s. Let’s wait and see.

Smriti is a Bollywood bee. She loves travelling and dissecting movies. According to her," Success is a two-step process – the first step is to decide, and the second one is to act on that decision."
Shila Iqbal axed from Emmerdale for Old Racist Tweets
Aishwarya Rai Bachchan signing a new Hollywood Film?