Shreya Ghoshal has rapidly become an Indian national treasure. Her sweet dulcet voice has made her one of the most sought-after Bollywood playback singers.

"I too want to explore different styles of music."

Which singing sensation had a European and U.K. 2013 tour that nearly sold out in all venues?

Here’s a clue: “Bairi piya bada bedardi, ish…” Well it can only be the young meethi awaaz of Shreya Ghoshal!

DESIblitz had the pleasure of interviewing the amazing vocalist Shreya.

Wearing a white beautifully embroidered ankarli, Shreya wore minimal make up with dramatic pinky red lipstick. She looked a million dollars (or should we say a million crore).

Shreya was down to earth and such a sweetheart, just as we expected from watching her on TV. It is so easy to see how and why so many people admire this talented young lady!

Shreya was born on 12th March 1984, to a Bengali Hindu family in Baharampur, West Bengal to parents Bishwajit Ghoshal and Sarmistha Ghoshal. 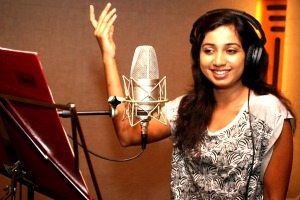 However, after only three months, her family moved to Rawatbhata near Rajasthan, as her father was transferred from his job as a nuclear power plant engineer. Her mother is extremely intelligent, and a Literature post-graduate.

Shreya is famous for being a playback singer for Hindi films, but is well known for singing in Assamese, Bengali, Bhojpuri, Gujarati, Kannada, Marathi, Punjabi, Odiya, Malayalam, Tamil and Telgu!

Wow, talk about mega talented! Shreya’s career took off when she won the Sa Re Ga Ma Pa contest in 1996.

Soon after this Sanjay Leela Bhansali offered her the opportunity to sing in his film Devdas in 2000, which was later released in 2002. Here she sang for the main heroine Paro, played by Aishwarya Rai Bachchan.

On her first recording for the film, Shreya states: “I remember I was asked to rehearse the song once before finally recording it. I simply closed my eyes and sang without a break.”

“When I opened my eyes, I noticed a lot of excitement and chaos outside the recording room. Then Sanjayji told me I had sung the song so well that they had recorded it at one go.” 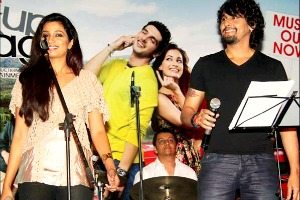 She went on to sing five songs in the film. Her performance won the Filmfare Award for Best Female Playback Singer, as well as Filmfare’s RD Burman Award for New Music Talent. She also won the National Film Award for the song, ‘Bairi Piya’.

Over the years Shreya has sung hit after hit with some of the top playback singers in the industry.

Shreya mentions that singing is what she lives and breathes every day. However, there are some kinds of songs that she is keen to avoid:

“I do not have a problem with what I feel are bad lyrics. But I cannot sing double-meaning songs and worse. There were some parts of ‘Chikni Chameli’ that I made sure were modified,” Shreya says. 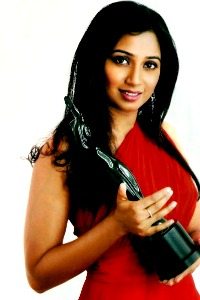 “It’s very simple: we are not like the West – yet! There is a social responsibility that all artistes have. Indians still have a comfort level in being covered. If that is thought of as not going with the times, then so be it!

“Indians worldwide are being increasingly respected and honoured for their cerebral qualities and that’s the way it should be! I am not insecure either, so why should I sing such attention-grabbing songs?” she adds.

Her idols: “My inspirations in my life is my dad. In music, in work and in terms of singing, Lataji, Ashaji, Ushaji. They are my idols,” Shreya admits.

But Shreya has ambitions and plans of her own when it comes to her singing career:

“I want to establish myself in the industry. Then I will cut an [independent] album. I want to come out with a new concept, break the monotony in music. Lata Mangeshkar’s Meera Bhajan was so out of the ordinary, a trendsetter. I too want to explore different styles of music,” she says.

Well, we certainly cannot wait for such an album. Her latest masterpiece is for new superhero movie Krrish 3, where she sings ‘God, Allah, Bagwan’ alongside the talented Sonu Nigam.

Can 2013, get any better? We think not! We wish the lovely and talented Shreya all the best and will keep our eyes peeled for her next chart busting song.

Anisha has lived and breathed Bollywood since she was young! She loves everything Desi and would like to become an actress in the future. Her life motto is " Zindagi nahin milti hai baar baar, toh khul ke jio aur haso - umar beeth jaati hai..."
Naseebo Lal ~ talks about her Life and Music
Aishwarya joins Beyoncé at Chime for Change