Bollywood Films to Look Forward to in 2019

Bollywood movie buffs enjoyed plenty of movies in 2018, including Sanju and 2.0. DESIblitz presents the most anticipated Bollywood films of 2019.

There are plenty of great Bollywood films releasing in 2019 that audiences can look forward to.

From sequels to action-packed entertainers or big ensemble casts coming together, there is something for everyone in 2019.

2018 has been a great year with several films doing exceedingly well at the box-office.

Big names have brought in big numbers, consequently leading to movies such as 2.0, Sanju and Padmaavat doing tremendous numbers at the Indian box-office and worldwide.

On the other hand, small budget films such as Badhaai Ho, Raazi and Stree also earned spots in the coveted 100 crore club.

2018 has shown audiences are evolving and that content is key.

DESIblitz countdowns 11 upcoming Bollywood films, which could continue the box-office magic in 2019. 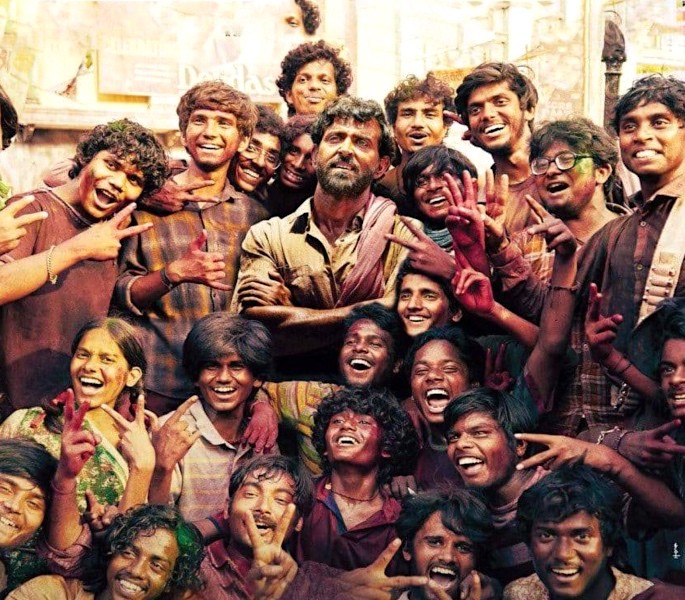 Super 30 is a drama film based on the life of mathematician Anand Kumar and his educational program Super 30.

The Super 30 program was initiated by Anand Kumar from Patna, Bihar in 2002 for underprivileged students.

Makers of the film released the first look of Hrithik Roshan as Anand Kumar earlier in February 2018. It shows Roshan sporting a bushy beard with untidy hair.

A further poster came out on Teacher’s Day, showing Hrithik, along with the students he teaches in the film.

The actress is a regular on Indian television and has done Marathi films too.

This film releases on January 25, 2019, and will be going head to head with Manikarnika: The Queen of Jhansi.

Manikarnika: The Queen of Jhansi 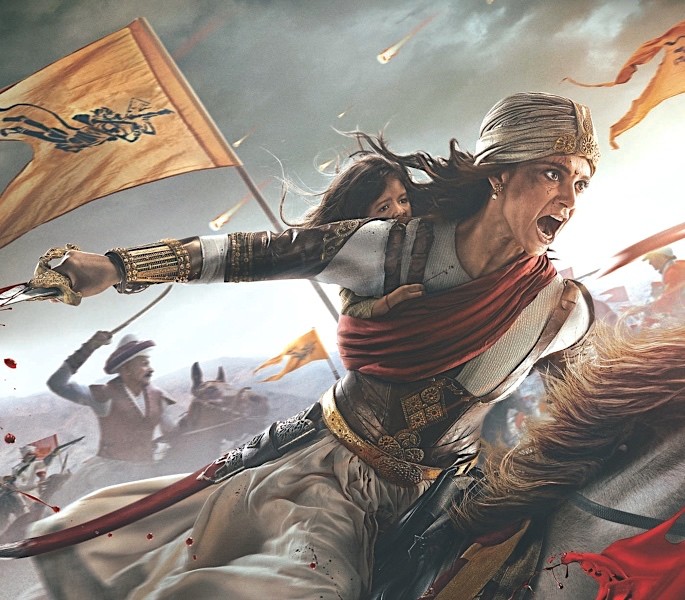 Kangana Ranaut is back with another potential power performance, playing perhaps her toughest role yet.

The actress portrays the role of Rani Laxmibai aka Manikarnika: The Queen of Jhansi.

The film revolves around the real life of Rani Laxmibai and her war against the British East India Company. The film will take viewers back to the Indian Rebellion of 1857.

A teaser of the film came out on October 1, 2018, showing Kangana in her brave female warrior avatar.

Kangana has also put on her director boots for this film. Speaking about the challenges of the film, Kangana told Firstpost:

“I did lose control over things, especially when it came like a hurricane and the way things have folded overnight.

“I had to shoot this film amidst a lot of challenges and that was a bit unsettling in the beginning.”

The official trailer launch for the film took place on December 18, 2018. The trailer has had a positive response, gaining over 20 million YouTube views.

Manikarnika: The Queen of Jhansi releases on January 25, 2019. 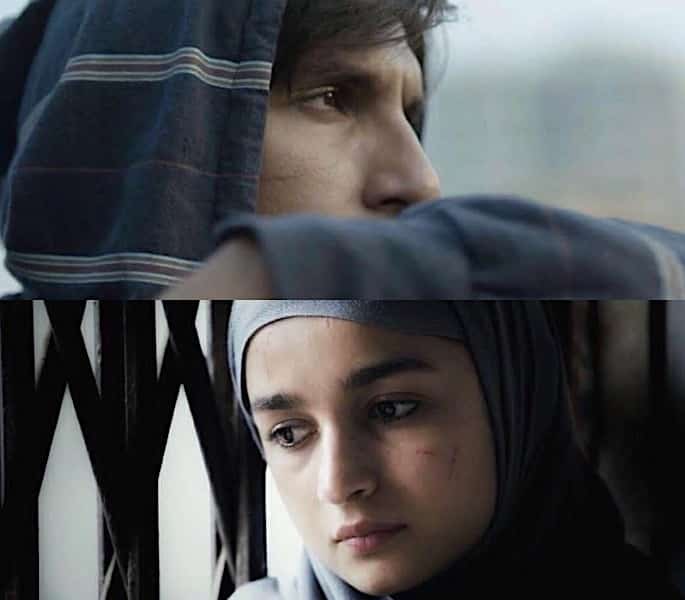 Gully Boy brings together two powerhouses of talent in the form of Ranveer Singh and Alia Bhatt.

The pair have previously worked on ad campaigns for travel company MakeMyTrip.

However, this will be the first time that the actors will be appearing together on the silver screen.

The film draws inspiration from the lives of Mumbai born rappers Vivian Fernandes aka Divine and Naved Shaikh aka Naezy. The pair is famous for their song ‘Mere Gully Mein.’

Singh plays an aspiring rapper from the slums in Mumbai, with Zoya Akhtar directing the film.

The first look of the film shows Ranveer and Alia’s characters both looking lost, with deep intensity in their eyes.

Ranveer’s character looks out into the distance, whilst Alia is sporting a headscarf for the first time on-screen.

The film is all set for Valentine’s Day release on February 14, 2019. The film hopes to win the hearts of the audiences. 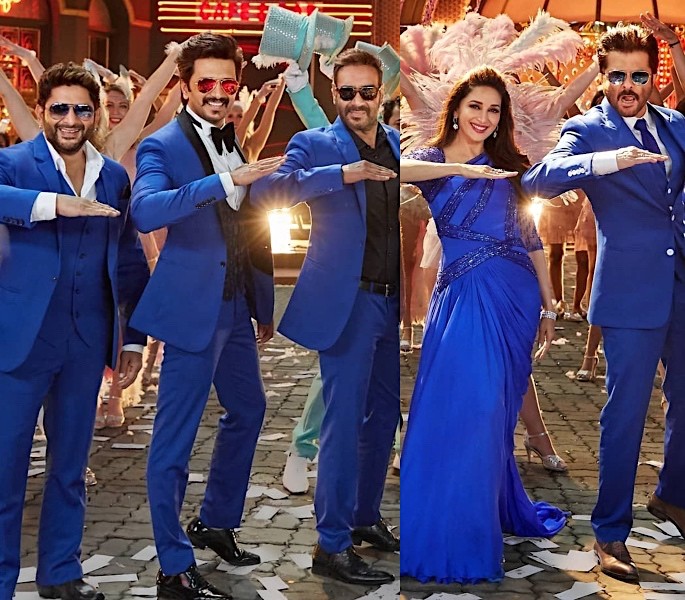 Total Dhamaal is the third film in the franchise after Dhamaal (2007) and Double Dhamaal (2011).

However, for this film, Anil Kapoor, Madhuri Dixit and Ajay Devgn join the usual trio. This will be the first collaboration between the iconic Jodi of Anil Kapoor and Madhuri Dixit in 17 years.

Director Indra Kumar recreates the song ‘Paisa Ye Paisa’ from Karz (1980) for Total Dhamaal. Additionally, Ajay Devgn did post a glimpse into the recreation of the song, with a picture of the cast on Instagram.

The star cast are all perfectly in sync, with the men wearing blue suits and Madhuri in a matching colour saree.

In addition, the film also stars Sonakshi Sinha who will be making a cameo appearance.

The film includes a new version of the song Mungda from Inkaar (1978), featuring Sonakshi Sinha alongside Ajay Devgn.

Total Dhamaal will be releasing on February 22, 2019. With such a great line-up of stars, it looks set to be a winner. 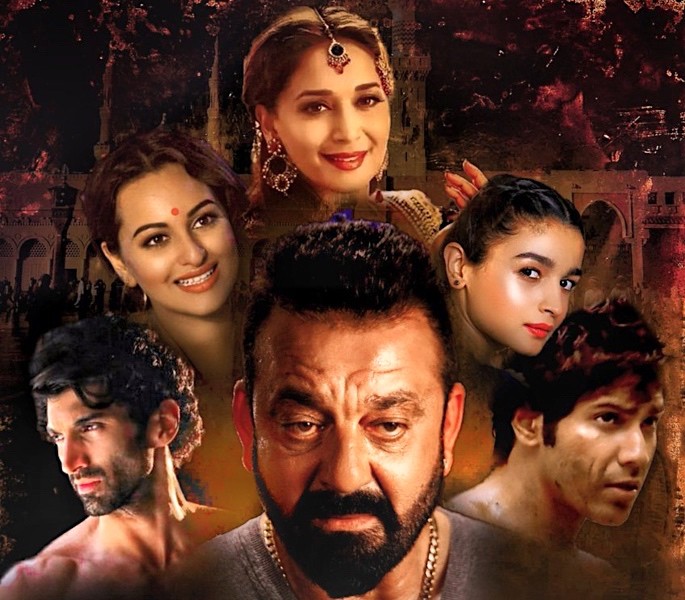 Kalank is a period-drama film, with an impressive ensemble cast. The film brings Sanjay Dutt (Nushrat’s father) and Madhuri Dixit (Ishmat, a courtesan) together after 21 years.

Karan Johar, who is producing Kalank, conceptualised the idea of the film fifteen years ago with his father Yash Johar (late).

The cast of the film have been shooting in various places across India including Mumbai, Hyderabad and Kargil.

Varun Dhawan shared a picture of himself, with Alia Bhatt and the team, after a schedule wrap. He posted on Instagram and captioned it:

“End of a crazy sched team #kalank. This has to be the most hard working team I have ever worked with.

“Day night these boys and girls have given their life so I can shine bright on screen.”

The ambitious project will also star actresses Kriti Sanon and Kiara Advani in item numbers. The film releases on April 19, 2019.

Student of the Year 2 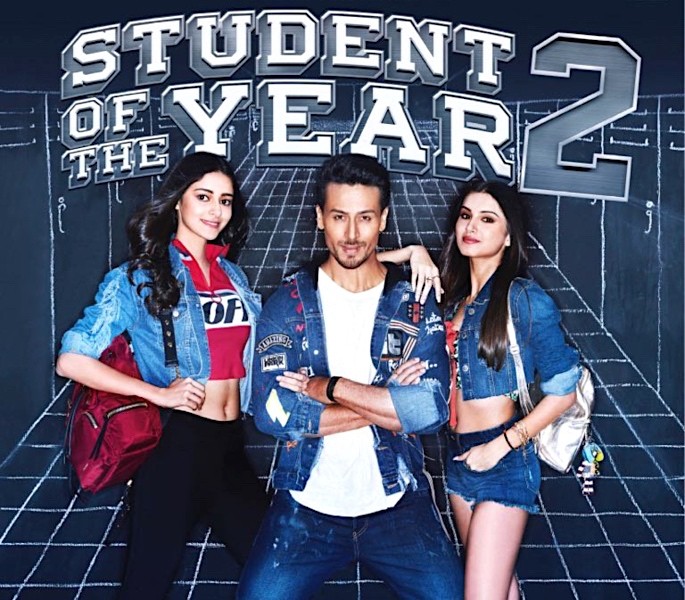 Dharma Productions and Karan Johar are back for the Student of the Year (2012) sequel, an Indian romantic comedy dance film.

This time the film is starring Tiger Shroff (Ronny), alongside debutants Tara Sutaria and Ananya Panday. Ananya is the daughter of Indian actor Chunky Panday.

Karan Johar, who is producing the film under his banner Dharma Productions, previously directed the first instalment.

However, he has handed the director’s hat over to Punit Malhotra who is directing part 2.

Student of the Year catapulted Alia Bhatt, Varun Dhawan and Sidharth Malhotra to stardom. There are similar expectations for Tara Sutaria and Ananya Panday.

Hollywood actor Will Smith who came to India in October 2018, has shot a song for the film.

In an interview with Mumbai Mirror, Shroff spoke about Will’s involvement in the film. He said:

“Shooting with Will sir was fun, the song will be a treat for the audiences when it releases.” 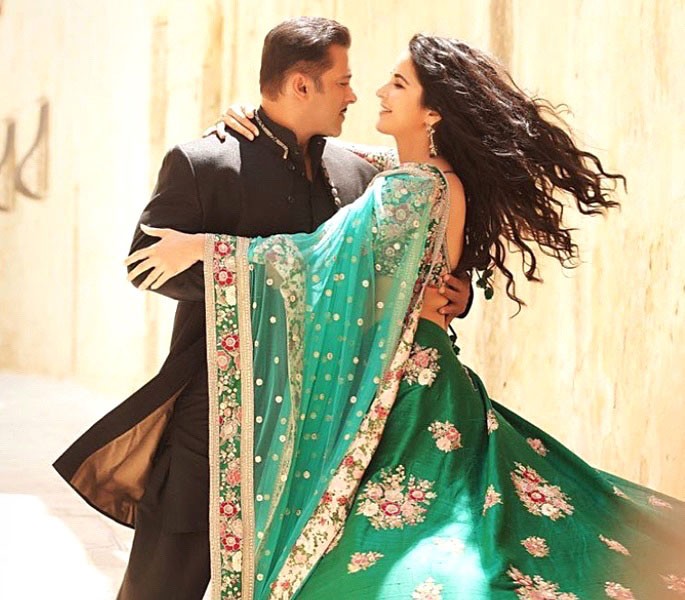 Salman Khan who plays Bharat and Katrina Kaif as Aaliya are set to dazzle once again on screen.

Priyanka Chopra was the original choice for the role Katrina is playing. However, with Priyanka opting out, Katrina came in.

The film is a Hindi adaptation of the South Korean film Ode To My Father (2014).

The cast have extensively shot the film in many locations including Abu Dhabi, Malta and India.

In a statement to DNA, a source states:

“Salman will sport five different looks in Bharat, which begins with him witnessing one of the most dramatic chapters of our history – the Partition.”

Salman shared a first look of the film, with a still of himself with Katrina on Instagram. The two appear to be mid-dance, with Katrina wearing a green saree, whilst Salman in a traditional black outfit.

Salman also became a photographer on set, taking pictures of Varun Dhawan who is playing a cameo in the film.

Bharat follows in the footsteps of Salman’s previous films and releases on Eid 2019. The movie will release on June 5, 2019. 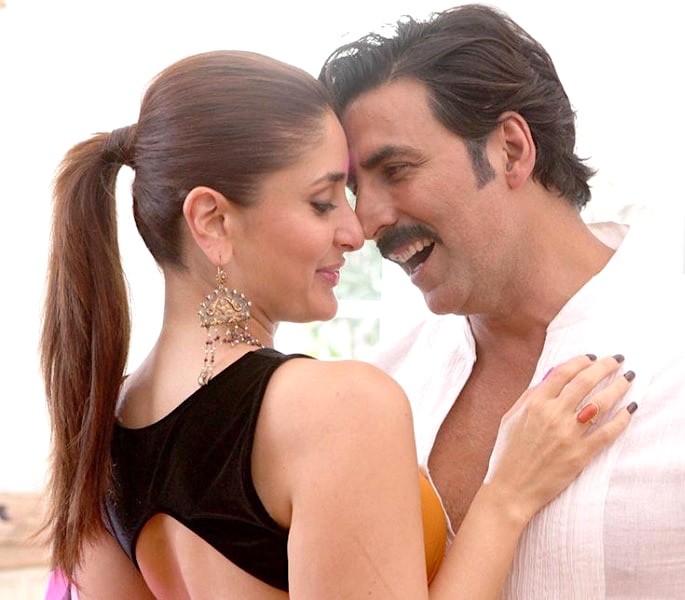 Akshay and Kareena have come together in a number of films with Kambakkht Ishq (2009) being the last.

The film will be helmed by debutant director Raj Mehta and produced by Karan Johar. Akshay went on Twitter during August 2018 to share the official announcement of the film. He said:

Akshay and Kareena who play husband and wife are trying for a baby in the film.

The shooting of the film began on November 30, 2018, with Diljit Dosanjh and Kiara Advani commencing the shoot.

The pair shared a fun video on their social media handles, announcing the commencement of the film. Besides this, the pair expressed how much they miss Akshay and Kareena. 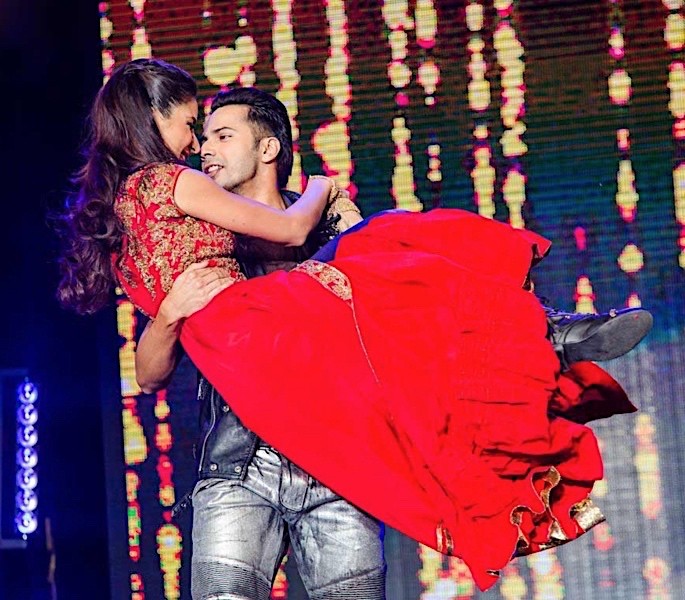 Varun Dhawan, who previously starred in ABCD 2 alongside Shraddha Kapoor, will this time be joined by Katrina Kaif.

According to media reports, the makers have recorded five songs for the film. Kaif plays a Pakistani girl and Dhawan as an Indian boy in the film.

The duo will eventually meet at an international dance competition in London.

A teaser of the film released in March 2018. Varun shared the teaser, writing alongside it:

“We dance to EXPRESS not to IMPRESS. The #BIGGESTDANCEFILM EVER IN 3D is here, 8th November 2019.

This will be the first time that Varun Dhawan and Katrina Kaif will be appearing on-screen together. For the third time in a row, Indian dance choreographer Prabhu Deva stars in the franchise.

Produced by Bhushan Kumar, the film releases on November 8, 2019. 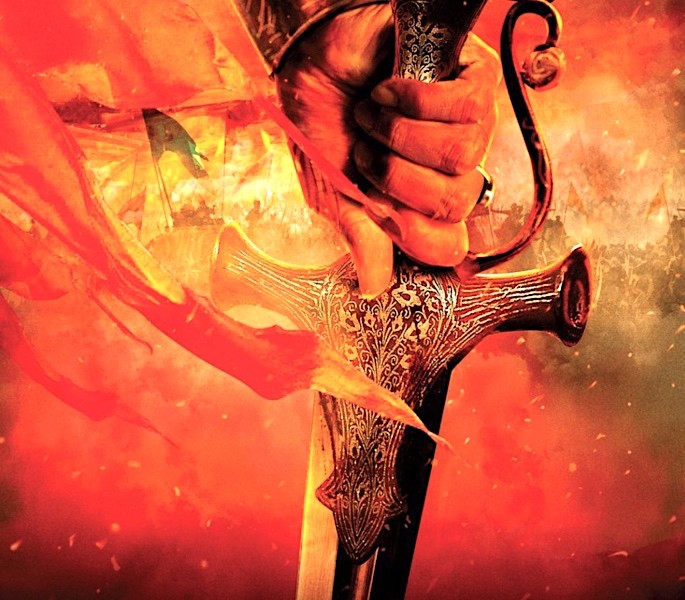 Panipat is a historical period drama film about what led to the ‘Third Battle of Panipat.’

Ashutosh Gowariker, National Film Award recipient is the director of this film. He is known for directing films such as Lagaan: Once Upon a Time in India (2001) and Jodhaa Akbar (2008).

The principal shooting of the film began on November 30, 2018, with the cast taking to Instagram to share the news. Arjun Kapoor wrote:

“Embarking on a journey like never before.. with Ashu sir & our entire team.”

Arjun Kapoor has been spotted with a long moustache and attempting to cover his head with hats, leading to speculation that he could be sporting a bald look for the film. 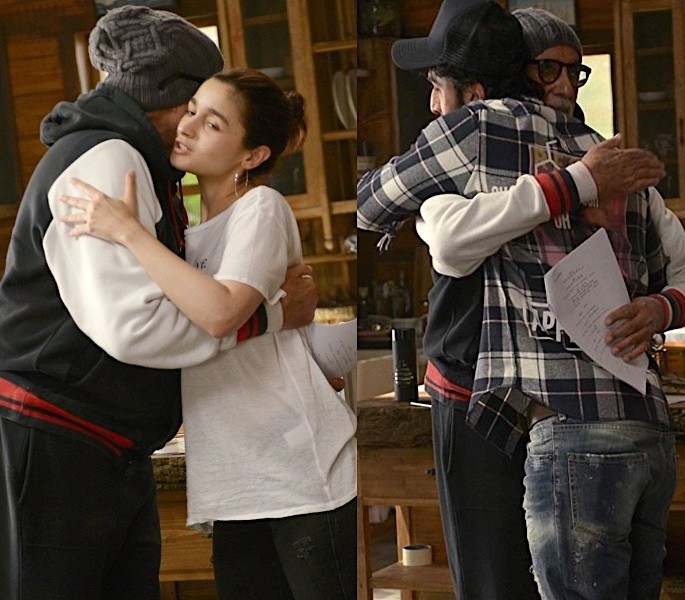 Brahmastra is a fantasy film directed by Ayan Mukerji. The film will see Ranbir Kapoor play a character (Devan Sharma/Dragon) with supernatural powers.

This is the first time that he will be seen on-screen with real-life girlfriend Alia Bhatt who plays a college student named Tara Bajwa.

Amitabh Bachchan plays the important character of Brahma, whilst Nagarjuna returns to Bollywood with the pivotal role of Vishnu.

TV celebrity Mouni Roy playing Brahma’s daughter Poulomi has a negative character in the film. Dimple Kapadia is also in the film, taking the role of Saraswati.

The film has extensively been shot in a variety of different locations including Bulgaria, London, New York and India.

The makers announced that Brahmastra will be a trilogy of films, made over a period of 10 years.

Furthermore, Ranbir and Alia were found shooting action sequences for the film in Mumbai on November 23, 2018.

The pair were wearing safety harnesses and shooting on a rooftop.

As a festive gift, Brahmastra is scheduled for a Christmas release on December 20, 2019.

2019 looks set to be a great year for Bollywood, with so many exciting releases.

Other big films that will release in 2019 include Akshay Kumar’s Kesari, Ajay Devgn and Kajol’s Taanaji, Hrithik Roshan and Tiger Shroff’s unnamed film with Yash Raj Films and Housefull 4.

With all these big movies coming out, 2019 looks set to follow suit of 2018 – Bollywood films are ready to ignite the box office in 2019.