Ranbir Kapoor and Alia Bhatt shoot an insane rooftop stunt for their upcoming film Brahmastra (2019). A video from the scene has been leaked online.

"She is injured; walking with a crutch and then does stunts at night with cables!"

Bollywood actors Ranbir Kapoor and Alia Bhatt have been shooting a crazy rooftop stunt for their forthcoming film Brahmastra (2019).

A video and photos of the pair have emerged online, giving fans a peek into the film.

After coming back from the USA, the two actors went straight back to work. Having shot the film Brahmastra around the world, it was now time to shoot in India.

It seems that director Ayan Mukerji of Yeh Jawaani Hai Deewani (2013) fame and producer Karan Johar quickly got Ranbir and Alia back on their toes.

The scene shot in Bhendi Bazaar, South Mumbai, India includes Kapoor moving across a narrow bridge with some degree of ease.

Bhatt walks along the same bridge with caution, holding her hands out to keep a balance. Ranbir is visibly assisting Alia as she moves forward.

In behind the scenes images, Bhatt looks quite excitable as she shoots the stunt sequences. 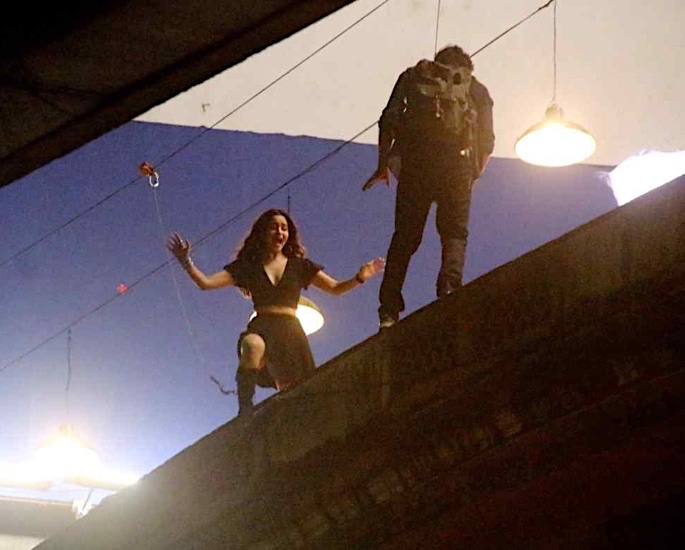 However, in another picture, Alia is more fearful as she balances herself on the narrow rooftop bridge.

The real-life couple are both in sporting black ensembles.

Ranbir is looking like an adventurer, wearing a black t-shirt and an open shirt, along with jeans and a backpack on.

Whilst Bhatt looks like the girl next door in her black top, with black skirt and boots. The pair are perfectly in-sync with their outfits.

Prior to performing the stunt, Kapoor did practice walking along the bridge without a backpack. The actor who has acrophobia – a fear of heights, looks slightly uneasy as he tries not to look down. 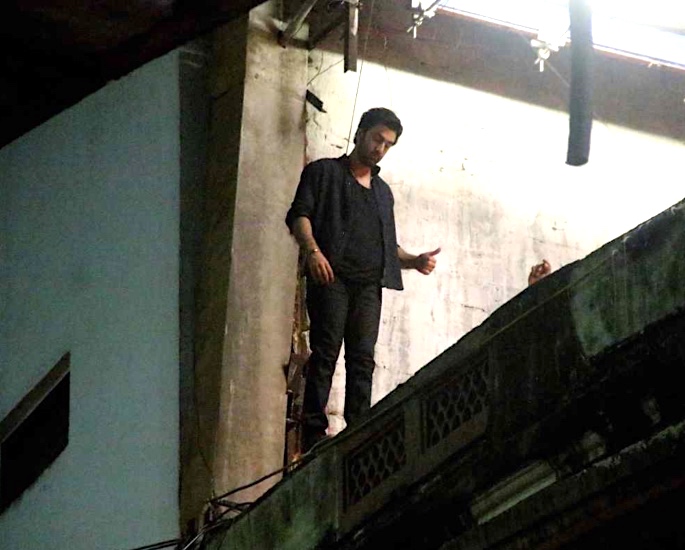 In one of the pictures taken by famous photographer Yogen Shah, Ranbir is seen giving the crew down below, a thumbs-up to acknowledge that he is ready.

Despite his fear of heights, Kapoor shows sheer determination as an actor to complete the stunt.

Besides images, Yogen captures both actors in action on video:

The sneak preview into the film has led many to share their thoughts on social media. One Twitter user expressing his excitement tweets:

“Wow superb perfect excellent fantastic of Ranbir Kapoor sir & Alia Bhatt mam both are together for shooting of upcoming film Brahmastra is awesome amazing stunts is too great.”

Just a few days before shooting this stunt, on November 20, 2018, Alia was seen visiting a doctor in Mumbai.

Playing the dutiful boyfriend, Ranbir did accompany Bhatt as she had to undergo treatment for an injury.

Alia was later seen walking with a crutch but still smiling for the cameras.

The Raazi (2018) star has been simultaneously shooting for both Kalank (2019) and Brahmastra. It appears that the strain of work has finally got to her.

However, like Kapoor, Bhatt demonstrates her grit to successfully complete the shoot. As an actor, she is on top form for the stunt sequences of Brahmastra.

“This girl @aliaa08 is a daredevil. She is injured; walking with a crutch and then does stunts at night with cables!”

This girl @aliaa08 is a daredevil. She is injured; walking with a crutch and then does stunts at night with cables! #AliaBhatt #Brahmastra @karanjohar #RanbirKapoor pic.twitter.com/Qdsql0bQbe

The Ayan Mukerji directorial is a fantasy film where Ranbir’s character is given superpowers.

The cast of the film has extensively shot in Bulgaria, as well as shooting schedules in London and New York.

This will be the first time that Ranbir Kapoor and Alia Bhatt will be appearing on screen together.

After seeing the behind the scenes stunts of the film, Brahmastra looks set to excite fans and set the box-office on fire!