Shilpa Shetty rocks a Blue Bikini for Anniversary in Maldives

Shilpa Shetty looks sensational in a blue halter bikini on a beach in the Maldives. Shilpa and husband Raj Kundra celebrate their 9th wedding anniversary.

"Who has the hottest Girlfriend in the world?? #Blessed."

Shilpa Shetty rocks a blue bikini on a beach in the Maldives. The 43-year-old showed off her sensational figure in a sparkly halter bikini.

Shilpa is in the Maldives celebrating her 9th wedding anniversary with husband Raj Kundra.

The Celebrity Big Brother 5 (2007) winner allowed fans a glimpse into the pair’s anniversary holiday on the island located in the Indian Ocean.

Shilpa posted a series of pictures on Instagram of herself having a great time at the Kanuhura Resort.

In one picture, Shetty is wearing her glittering blue halter top bikini, with a pair of sunglasses on. Shilpa is smiling as she takes in the beautiful weather, with the picturesque clear blue water behind her.

In another picture, Shetty has her back to the camera, showing off her toned body, as she looks out into the stunning views.

She captioned the pictures writing:

“Soaking in the Maldivian Sun and loving it. If I had my way, would live here for the rest of my life #beachbody #waterbaby #bikini #anniversary #9yrs #peace #gratitude #maldives #timelessmemories #sun.” 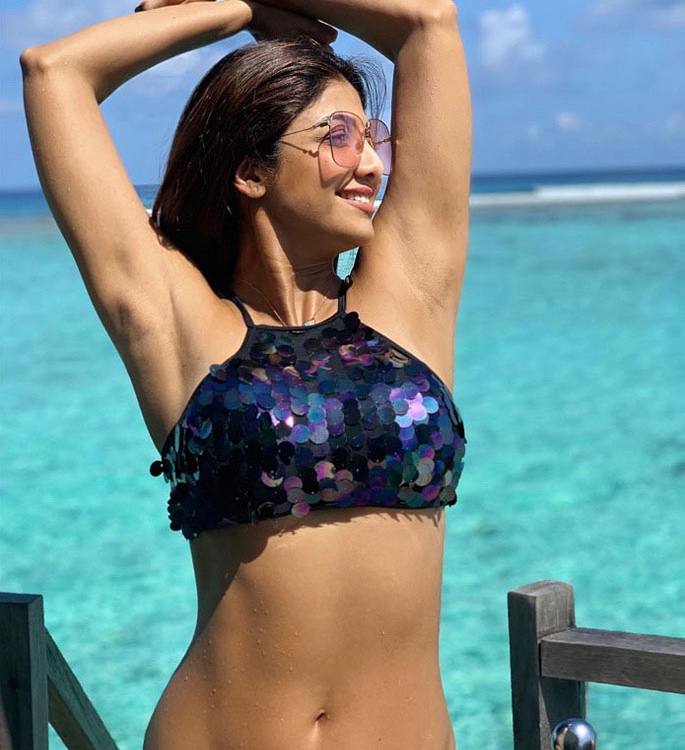 “Oh lala that body, those curves, that tanned skin…loving the beach vibes.” Whilst another fan mentioned: “The hottest hottie in Bollywood by far.”

Film director and a close friend Farah Khan replied with her reaction to Shilpa’s bikini shots. She said: “Its NOT fair!!” 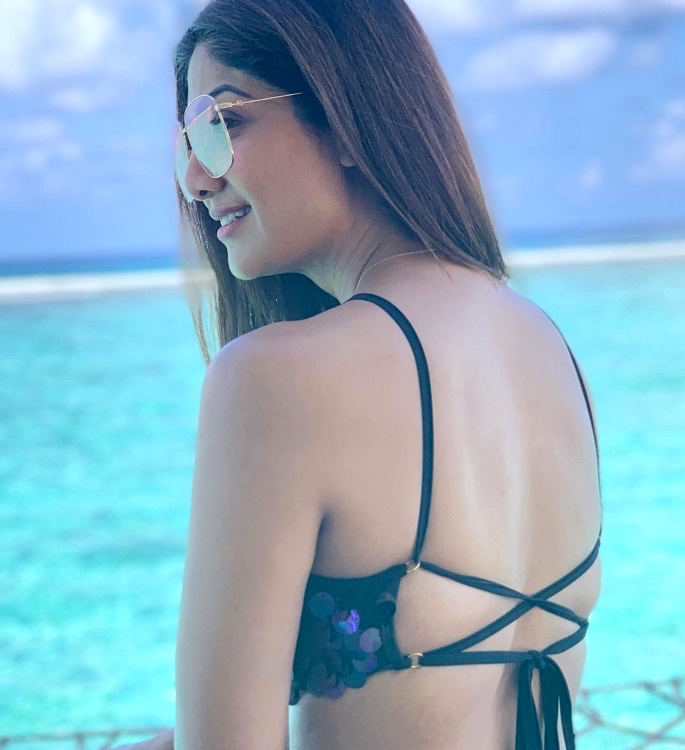 Shetty’s husband Raj Kundra proclaimed: “Who has the hottest Girlfriend in the world?? #Blessed.”

Shilpa is a keen advocate for healthy living, often showing fans her healthy recipes and fitness routines. She is a yoga practitioner, launching her own fitness DVD titled: Shilpa’s Yoga (2015).

The Dhadkan (2000) star’s healthy lifestyle is clearly working for her as she shows off her amazing figure in the Maldives. 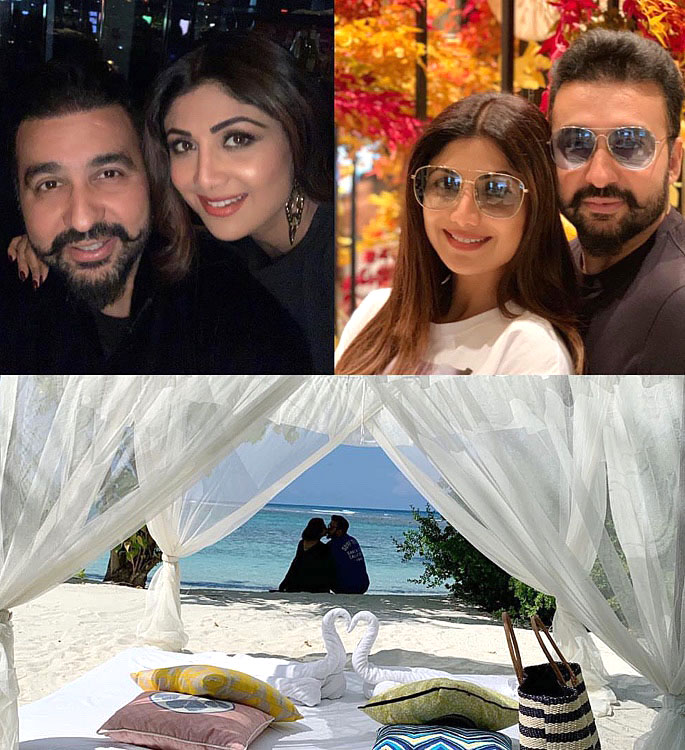 Shetty also went on Instagram to wish her husband Raj Kundra a happy anniversary in a heartfelt post. She wrote:

“I can’t match up to your surprises, gestures or big heart.. but I have someone up there to thank, that we are a MATCH made for each other.

“Will love you until I die.. and if there’s a life after that..will love then.. Happy 9th Anniversary hubby.”

She also put up a collage of pictures of the two of them.

In an equally heartfelt post, hubby Kundra sent wishes for his wife, alongside a video with pictures of the two:

He shared a beautiful message:

“Sharing the good times, bearing the hard times, trusting in love to show us the way. Laughing and living, trusting and forgiving, together forever, side by side, day by day.

“I love you my darling! #9years of bliss, am blessed to have you in my life!

“Happy Anniversary my wife, my girlfriend, my best friend, my soulmate who I want to fall more and more in love with #anniversary.”

The loved-up couple has been having the time of their life the Maldives. Shilpa shared a video on Instagram of the pair swimming in the stunning blue water.

On the work front, Shetty launched her new show Hear Me Love Me (2018). The Amazon prime video series is a dating show which follows host Shilpa who plays cupid.

She mentors the young women who go on three dates with three different men, ultimately choosing one suitor.

Besides this, Shilpa will feature as a judge on Super Dancer 3 (2018). Having previously appeared as a judge on the first two seasons, Shetty is back for the third season.

She will star alongside fellow judges filmmaker Anurag Basu and choreographer Geeta Kapur. The show is auditioning contestants and is yet to be given an air date.

It seems the Baazigar (1993) actress is certainly busy on the professional front. But for now, Shilpa Shetty continues to impress many, as she shows off her toned body in the Maldives.