Manchester Metropolitan University (MMU) has become the first university in the North of England to offer undergraduate courses in Urdu. DESIblitz reports.

Urdu is the official language of Pakistan, but it is also widely spoken in India, the Middle East, Canada, UK and USA.

Manchester Metropolitan University (MMU) will become the first university in the North of England to introduce undergraduate courses in Urdu from September 2015.

It will offer students the opportunity to study Urdu at degree level and acknowledge Urdu in the graduates’ degree titles.

At the moment, Urdu can only be studied alongside other subjects, such as French and International Politics. It is also available as an elective subject for other degree programmes.

However, most of these courses only cater for complete beginners or intermediate learners.

There are plans to extend the course to advanced level, but MMU will stand out for being able to offer Urdu as a single subject for prospective students.

Dr Sharon Handley, Dean of the Faculty of Humanities, Languages and Social Science at MMU, believes this is a key move for higher education in the UK.

She said: “I am delighted that the Department of Languages, Information and Communications is launching a Minor Route in Urdu, in response to demand for Urdu which is the fourth most popular language at GCSE after French, Spanish and German. 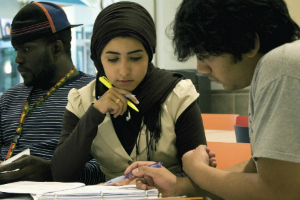 “This initiative will enable many students who did not have the opportunity to study Urdu at school to do so in combination with another subject to degree level, opening up many new opportunities to them.”

Dr Handley added: “MMU is leading on a range of initiatives to promote a diversification of languages in response to the strategic needs of the Government and Business, and this is an important step forwards, also illustrating MMU’s commitment to serving the diverse communities within this region.”

To welcome students on board and promote the new courses, the department will be organising an ‘Urdu Launch and Celebration Day’ from 10am to 2pm on March 25, 2015.

The event will kick off with a range of pupil workshops delivered by Qaisra Shahraz, a British-Pakistani novelist and scriptwriter, and Sheraz Ali, a lecturer at the University of Manchester.

The interactive open day at MMU campus will finish with live performances in the afternoon. 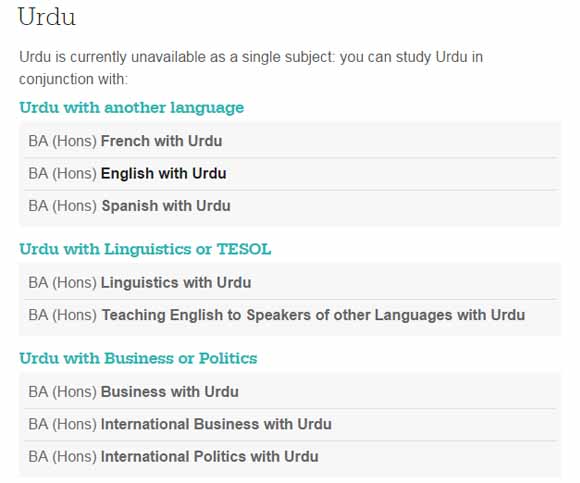 Although Urdu is the official language of Pakistan alongside English, it is widely spoken in India, the Middle East, Canada, UK and USA.

In the UK alone, the Urdu-speaking community is 400,000-strong. They populate across different regions in the country – the North West (mainly Manchester), the North (Leeds and Bradford), the West Midlands, in various areas of London and in parts of Scotland.

Despite being spoken by nearly 100 million people around the world, tailored courses in Urdu have not been made directly available for undergraduates in the UK.

You can find it as part of BA South Asian Studies Urdu Pathway at SOAS, University of London. You can also apply to study the Asian language at top UK universities such as Oxford and Cambridge, but the levels are either too advanced or basic.

With MMU’s new offering, students in the North of England can continue to pursue Urdu after secondary school. Currently, Urdu is taken by an average of 5,000 students at GCSE and 500 at A Level every year.

Simon is a Communication, English and Psychology graduate, currently a Masters student at BCU. He is a left-brain person and enjoys anything artsy. At his best when asked to do something new, you’ll find him dwell on “Doing is living!”
Taxi Driver caught watching Bollywood film
Afzal Amin accused of fake EDL march to win votes