From the China to the rest of the world, the tie is major fashion accessory today. We look at its history, the styles and tips on getting the perfect tie.

A great tie should look and feel good

It’s said ‘A man is judged by the shoes he wears.’ So how true is this today? Shoes do count but the ‘tie’ worn by a man can make a huge difference to his look as much as the shoes.

Today, the tie has gained immense importance among men across the globe, its the accessory that is worn to suit taste, occasion and fashion. From a piece of fabric draped around neck during the olden days, the tie has evolved into luxury wear. Its root is embedded deeply in history and an amalgamation of different cultures from numerous countries influenced the evolution of this particular men’s neck wear.

History of the Tie 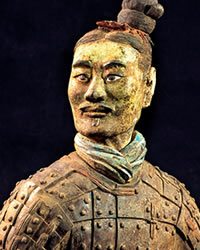 According to archaeologist, Chinese men were the first to wear tie. Neckties can be traced all the way back to about 200 BC during the period of Chinese dynasties. Soldiers from the Chinese terracotta army, all adorned neckwear, most likely made out of silk. Since silk was a luxury item, this demonstrated the high regard in which the Emperor held them.

Different techniques of knotting were introduced and ties were manufactured out of different fabric and designs. Its length too varied from place to place and a bow tie too was introduced. French men wore bow ties as a fashion statement and an item of luxury dressing. 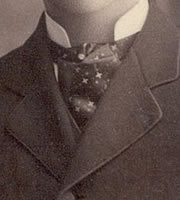 In Britain, in the 1880s a group Oxford rowers from Exeter College took the ribbons from their hats and wore them around their necks. They then ordered ties to be made in these colours. During the First World War, the large numbers of conscription used the tie to show their attachment to one regiment or another.

Men did not just wear ties. Feminine versions of men’s neckties began to appear in the 1800’s along with the more tailored clothing which women wore while bicycling, skating, hiking, or boating. More women began wearing ties, and trousers, during the first World War, as millions of women headed to offices and factories to fill the vacancies created by men at war.

Schools, clubs and universities also followed suit and it soon became the height of popular fashion.

What make a good tie?

Ties today are available in an array of designs, colours, fabrics and style.

A great tie should look and feel good; it should have a heavy base and fall well, which is the reason silk ties work best. Rich fabric, lining and interlining are very important. Most ties are lined as they make the tie sit well on the chest.

‘a good tie is one that bounces back to its original shape after being knotted for 14 hours.’

The standard tie length is 140 cm but it could range from 135 to 145 cm. The width of the tie too can vary, usually any tie with a width between 6.9cm and 8.75cm will generally look fine. It’s suggested to opt for medium width as compared to the wide or narrow style, as it’s considered classic and never out of style. However, fashionable ties are always worn to follow trends.

How to Choose a Tie
A tie is like expensive lingerie, that’s why the right tie is so important. It makes you feel good about what you are wearing. Choosing the best tie is not as easy as it sounds but neither difficult if you are wise. 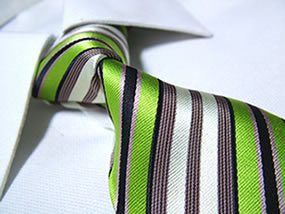 First find out when and where you want to wear it and next thing is about your taste. Ties are usually worn for social occasions including weddings, formal functions and parties. So keep this in mind when selecting a tie.

For example, the office environment is conservative, so select something that is reflects the nature of your work and style. If it is serious, then go for sober and subtle colours but if arty, cartoon characters or bold big motifs all have a place.

Avoid wearing clashing colours with the rest of your clothes and shoes. However, if you feel colour has nothing to do with masculinity then go ahead, explore! Look at the pinks, the vibrant orange and the bright greens!

The diagonal stripes designs are simple yet classy and elegant. They can easily match any suit and shirt. They are the most common tie chosen for business and office attire.

Fashionable and Trendy Ties
A tie is no more synonymous with formal dressing than it is to creative minds redefining the tie. Today, a tie can be playful, artistic and dramatic too. 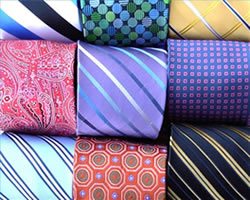 The novelty or fanciful ties are trendsetters globally, especially in men’s fashion. Not attire you can wear for every occasion but certainly add to your glam quotient for unique occasions like a date, an office party or a crazy night out!

It’s said that Salvador Dali, in the 1940’s, started a movement, when he shocked the art world by producing his work on fine silk ties. Right from bling-bling to abstract paintings, these ties certainly grab attention.

Do’s and Don’ts for a Tie 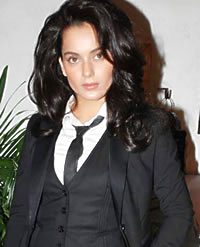 f your are a woman, a tie can also play a great role as a fashion accessory and add some pizzaz to your dress sense. Especially, if you are wearing a business suit, want to attract instant attention and even cause some sensual stir! Arshiya Fakih, Indian fashion designer says. “It’s all about exhibiting ‘woman power’. There is a certain element of sex appeal attached to seeing a woman dressed in a slightly masculine way.”

So next time you buy a tie, plan it well and do invest on a good tie. It is the ultimate accessory that sets you apart.

What ties do you like? Are you bold and colourful? or conservative and safe? What styles of ties do you have in your wardrobe? Do you like a man in a tie?

Here are some photos of different types of ties.

Omi is a freelance fashion stylist and enjoys writing. He describes himself as 'a dare devil with quicksilver tongue and maverick mind, who wears his heart on his sleeve.' As a writer by profession and by choice, he dwells in the world of words.
The Sherwani for Men
Allesley Hotel Asian Wedding Fayre