Shilpa Shetty and Raj Kundra took their vows for a new life together starting with a simple family wedding and then a spectacular reception party featuring celebrities galore.

Raj and I connect on a different level

One of the most talked about weddings between Bollywood star and Celebrity Big Brother winner, Shilpa Shetty, and British Asian millionaire, Raj Kundra; took centre stage following their much publicised engagement on 24th October 2009, which took place at Raj’s 7th floor flat in Juhu, Mumbai.

The wedding, a lavish but a close family affair featured Shilpa wearing red bridal wear with rubies and Swarovski pearls, designed by Tarun Tahiliani. Kiran Bawa witnessing the ceremony said, “Everything went very well. All parents want their children to get married happily and that goes the same for Shilpa’s parents as well. They are very happy. Raj and Shilpa both were very nervous before the marriage but now they are happy.” 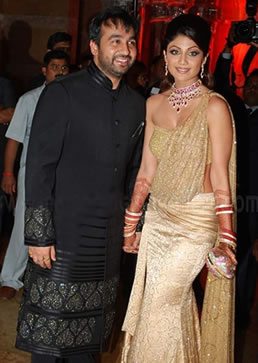 The two day celebration focused on the newly married couple. The reception party held at Mumbai’s Grand Hyatt on the 24th November, boasted a guest list with celebrities galore. Bollywood super stars and other popular celebrities from different walks of life like sports, politics and fashion attended the night as well wishers for the newly wed couple.

Akshay Kumar was not present, most likely due to his liaisons with Shilpa in the past, and Salman Khan was not seen in the party, perhaps due to SRK being at the bash.

At the reception, Shilpa looked stunning in a two-piece outfit in gold with Swarovski-encrusted bodysuit along with a satin sari-gown in the same colour, again designed by Tarun Tahiliani. Raj wore a black half sherwani suit.

“This is my dream wedding. We plan to shuttle between Mumbai and London after marriage. I shall strive to be as successful at home as I am outside. I want to excel as a homemaker. “

Shilpa says of her life ahead with Raj, “There’s nothing wrong in looking forward to a comfortable life. But money isn’t everything. Raj and I connect on a different level.”

Shamita Shetty, sister of Shilpa, left the Big Boss house to attend the wedding. She looked gorgeous in an embroidered saree in shades of blue. 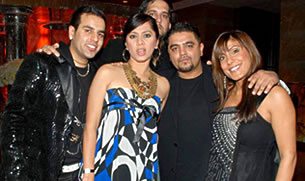 Entertainment for the wedding was provided by British Asian music maestro Rishi Rich and his artists. Featuring DJ Krash, H Dhami, Juggy D and Veronica. As part of the set, a new singer was revelasesd, named Romi. He is a Bollywood style singer and is the brother-in-law of Raj Kundra. He got Shilpa and Raj dancing on the stage as he dedicated a song to them. Rishi said, “It was surreal.”

Watch the video report on the reception party to see some of the stars present at this huge wedding.

Although the couple are happily married now, the start of their relationship was surrounded by accusations. Reports speculating that Shilpa may have played a role in Raj’s separation from his first wife Kavita and their then one-year-old daughter made headlines. Shilpa has always denied this and says she got together with Raj after his marriage broke up.

A new life for this glitzy couple has begun and their next stop is a honeymoon in the Bahamas. DESIblitz wishes the couple all the best. It is very likely that Shilpa will be spotted in Weyford in the UK, possibly shopping at Waitrose or not?

Nazhat is an ambitious 'Desi' woman with interests in news and lifestyle. As a writer with a determined journalistic flair, she firmly believes in the motto "an investment in knowledge pays the best interest," by Benjamin Franklin.
The Family – Punjabi Reality TV
Shahrukh Khan goes Green