India is under major threat from Global Warming and Shahrukh Khan has taken the step to raise awareness of environment protection.

Every individual must be utmost cautious

At the screening and a photo exhibition for ‘Environment Protection’ organised by Consulate General of France, SRK said, “Every individual must be utmost cautious and not to waste natural resources, be it water or any other entity.”

“I don’t think we are cautious about such small things. But it is necessary to take notice. It might be possible that in our lifetime nothing happens, but as the new years come, I am sure some problems will definitely be there. Although there are talks that the world will end, universe will collapse but I think it might not collapse by some external factor but we ourselves will end up destroying it, like the way we have been doing it. So I think it’s an important aspect,” he said.

“Most of us who live in big towns or live in economically-forward countries, I think we give less notice to such things. We generally neglect them. Even if I am thinking about such things in over the last one-two years, it is because of such movements or talks by NGO’s which make you feel once or twice such as) while shaving to close the tap and to do other small things,” he added.

SRK is very pleased at the introduction of environmental studies as an academic topic in schools.

“And one good thing I have realised while teaching my children is that environmental studies have been introduced as a subject in school for the last 4-5 years. So that’s a very good thing.” 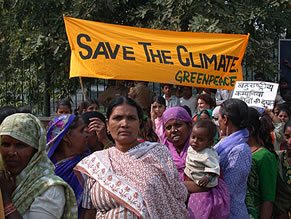 The Indira Gandhi Institute of Development Research has reported that, if the predictions relating to global warming made by the Intergovernmental Panel on Climate Change come to fruition, climate-related factors could cause India’s GDP to decline by up to 9%; contributing to this would be shifting growing seasons for major crops such as rice, production of which could fall by 40%. Around seven million people are projected to be displaced due to, among other factors, submersion of parts of Mumbai and Chennai, if global temperatures were to rise by a mere 2 °C (3.6 °F).

The Himalayas, for example, have been warming three times as fast as the world average, with the result that their glaciers are shrinking more rapidly than anywhere else and could disappear by 2035.

China and India account for 10 percent and 3 percent, respectively, of the man-made greenhouse gases now in the atmosphere, compared with 75 percent for the developed world (according to data compiled by the World Resources Institute). As patterns of rainfall shift to more deluges as well as more droughts due to the when-it-rains-it-pours phenomenon that global warming causes, both countries will also suffer more floods. The two countries are among the most threatened by climate change, but their huge populations mean they will still be heavily reliant on burning fossil fuels to try to lift millions out of poverty.

The UN Inter-governmental Panel on Climate Change predicts that Global Warming could raise sea levels up to 58 centimetres and submerge low-lying islands by 2100.

Therefore, the raising of awareness by a Bollywood icon like SRK should definitely make a difference to those ignoring or completely unaware of what global warming is doing to the world and especially, India.

Amit enjoys creative challenges and uses writing as a tool for revelation. He has major interest in news, current affairs, trends and cinema. He likes the quote: "Nothing in fine print is ever good news."
Shilpa Shetty and Raj Kundra Marry
Aamir Khan triumphs with 3 Idiots