The Family, on Channel 4, is a reality television series shot as an observational documentary. It gives an insight into the Grewal family, a Punjabi family living in West London.

The new series is the first of its kind

UK’s Channel 4 brings to our screens a new series of the BAFTA nominated television series, ‘The Family’ and this time it is the turn of The Grewals, a British Asian family consisting of nine members; one of whom is born during the series.

The new series is the first of its kind, to film an eight-part observational documentary showing British Asian life in such detail. The Grewals were filmed over a period of 8 weeks with 28 cameras following them around the clock.

The Grewals are a fun-loving, lively Punjabi family living in London, made up of three generations, all living in the same house. The cameras capture moments all around the main rooms in the house and even in the garden. 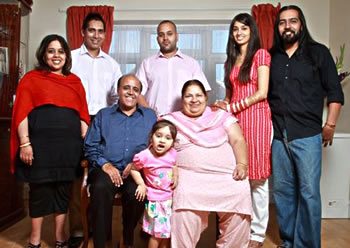 The episodes of the series will feature the Brit-Asian wedding of the eldest son complicated by his bride’s own family not being part of the wedding and the challenges of a pregnant daughter and son-in-law bringing a new addition to the family whilst running a theatre business.

The programme will give an insight into British Asian life and shows happy funny, emotional, sad and times of conflict too.

It will probably give non-Asians a better understanding of what goes on in a typical British Asian Punjabi household with an extended family.

The characters making up the Grewal family are as follows:

Gurdip and Jeet, were exclusively interviewed by DESIblitz.com after the fantastic performance of their funny Punjabi play, Patiala Junction, by the Matribhoomi Theatre company at The Drum in Birmingham. So, we will be looking out for them on this series of  The Family!

Simon Dickson, deputy head of documentaries at Channel 4, said: “Following the success of last year’s series, we are lucky to have found another brilliant family through whose eyes we can experience the highs and lows of family life. The Grewals are close knit and wonderfully warm – I know viewers are going to take them to their hearts over the coming weeks.”

The series starts on Wednesday 4th November at 9.00pm on Channel 4.

Baldev enjoys sports, reading and meeting people of interest. In between his social life he loves to write. He quotes Groucho Marx - "The two most engaging powers of an author are to make new things familiar, and familiar things new."
Bollywood loves Britain
Shilpa Shetty and Raj Kundra Marry