The Matribhoomi Theatre Company is a husband and wife team that produces plays in Punjabi known for their comedy. Patiala Junction is such a play – simply full of laughs.

When Jatinder came from India, he did not want a 9-5 job

The UK’s Matribhoomi Theatre Company have made a name for themselves by performing unique and very funny plays in Punjabi. The husband and wife team of Jatinder Singh and Gurdip Kaur Chaudhary have written, directed and produced over five plays in Punjabi and Hindi.

Notably, their Punjabi plays are written with every-day authentic and mother-tongue based story lines with comedy empowering every play. Refreshingly funny, the comedy has audiences hooked. The plays do appeal to all age groups but some fluency in Punjabi does help you understand the jokes.

Jatinder is a professionally trained actor, dancer and puppeteer. He trained at HCRF & TA (India). He learnt the traditional and modern art of puppetry from Legendary Puppeteer Dadi. D Pudumjee, President (UNIMA). He has also acted in Bollywood films including the mega hit Gangster, Sehar, A Belly Full Of Dreams, Insaan, The Dressing Room and Buddha Never Smiled.

Gurdip is qualified with a B-Tech National Diploma in Media Studies. She directed three independent films before commencing her theatre projects.

Jatinder Singh, originally from India, artistically directs and acts in the plays. He also assists with stage sets and coaching the cast. Gurdip works closely with him and writes the stories and dialogues. She is also responsible for performance lighting and sound. 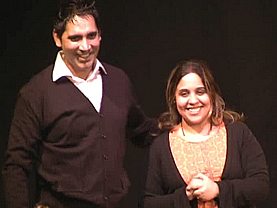 When Jatinder came from India, he did not want a 9-5 job. He told Gurdip that he needed to keep his acting career alive. This is how Matribhoomi Theatre Company was formed and they both set on a mission to create theatre not for the masses but for specific native language audiences which would appreciate their efforts to produce and perform plays in these languages.

Jatinder and Gurdip work together as a family on the productions, and view the rest of the cast as part of this family. Many of the younger actors and actresses performing in the plays are not totally fluent in Punjabi, so Jatinder coaches them on their language skills. Also their own kids are featured in the plays too.

The aim and approach of the Matribhoomi Theatre Company is to promote the Punjabi language, culture and especially comedy; for audiences to be able to have some escapism and laughs during their plays.

They decided to name the genre of their Punjabi plays as ‘Punjabiwood’ which is a take on the Bollywood and Hollywood labels but as applied to their Punjabi orientated productions. The plays produced by the Matribhoomi Theatre Company include the following.

DESIblitz met up with the Matribhoomi Theatre Company at a performance of the  ‘Patiala Junction’ play, at The Drum in Brimingham, UK.

We wanted to know more about the team and the production. So, we spoke to Jatinder, Gurdip and majority of the cast including, Ms Kulwant Kaur the most senior actress;  Mr Balwinder Jhim who has attended acting school, Mr Satinder Gill who is studying acting and Miss Nitu Sond who has embraced drama with no formal acting background.

Check out clips of ‘Patiala Junction’ and what they told us in an exclusive video; both as individuals and as part of the Matribhoomi production below.

We found the play very funny, different and enjoyable. It articulated the story very well of Mr Patiala Singh, the rich old man with miserly ways, using clever and minimalistic use of stage sets and props. Patiala Singh played by Jatinder, was the pivotal character of the play, providing the foundation for the rest of the characters and the Punjabi comedy baseline of the story.

We are sure that the Matribhoomi Theatre Company will be producing more plays of the same funny nature and satire in the future. So, look out for productions from this very unique drama company and do support their future projects.

Check out the photo gallery from the show.

Thanks to the Matribhoomi Theatre Company. Special Thanks to The Drum.