‘Not For Prophet’ will be the first unmissable solo show from the Piccadilly Comedian of the Year 2016, Eshaan Akbar, at Edinburgh Fringe Festival 2017.

Joining the likes of Tez Ilyas and Hasan Minhaj, Akbar is one of the newest faces on the Asian comedy scene.

Born and raised in East London, Eshaan Akbar worked in an extensive range of careers from private banking to corporate communications in addition to seeing his work in The Guardian, The Times Online and The Huffington Post UK.

His journey on the comedy scene only began three years ago. It was at 2016’s Fringe Festival that Eshaan Akbar won over audiences at CPK’s ‘The Lunchtime Special’ for up and coming comedians.

He also found great success with his own show ‘Eshaan Akbar and Friends’. The show brought together a selection of comedians including fellow London based comedian, Sindhu Vee.

Now Eshaan Akbar returns to the Fringe with a brand new solo. His show will be at The Gilded Balloon between 4th and 27th August 2017.

DESIblitz chats exclusively with Ehsaan Akbar about his latest show, ‘Not For Prophet’, what inspires his comedy writing, and his favourite Desi joke.

How did you switch from banking to comedy?

I started comedy three years ago when I was toying with the idea of becoming a broadcast journalist. I recorded a showreel and producer told me I was funny and should try my hand at stand up.

I made my first foray onto an open mic stage in Liverpool Street in March 2014 and since then, I’ve been very lucky with the opportunities that have come my way.

In October last year, I was working for a big bank and an opportunity came about for me to move and I decided to take the plunge and do comedy full-time!

Did you have any favourite comedians growing up?

“Goodness Gracious Me had a huge influence on me – I started doing impressions of the characters in school to make friends. It worked. After that, my favourite comedian was probably Lee Evans.”

It was after I started performing comedy that I learned to appreciate the skill and brilliance of people like James Acaster and the Black American cabal of comedians – Dave Chappelle, Eddie Murphy, Chris Rock and Patrice O’Neil.

How did your family react when you told them that you wanted to be a professional comedian?

I never really told them I wanted to be a professional stand-up. I remember leaving my job in October and being at home when my dad came back. I told him that I’d left and was planning on not going back to see how comedy worked out.

He said: “That’s fine – as long as you are earning money.” I thought, “great, he’s supportive”.

Then he topped it with: “But remember – you’re 32 and a ‘professional’ stand-up comedian. No one will marry you.” 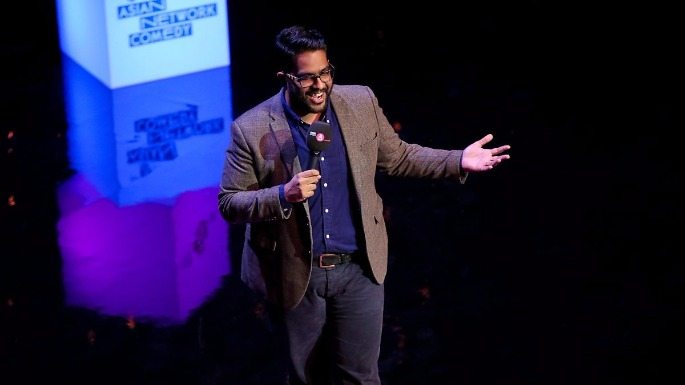 Who inspires you the most when it comes to writing comedy?

“My most favourite Desi joke is very long and most enjoyed in Urdu or Hindi. But I’ll try and do it justice here.”

Three police officers – a junior sergeant, sergeant and Senior Inspector foiled a burglary in a mithai (Indian sweetmeats) shop. The proprietor was so grateful, he gave them the one large bowl of kheer he had left.

When they got back to the station, they were trying to split the kheer most fairly but found it tricky doing it three ways. So the Senior Inspector said: “I tell you what. Let’s all go to sleep and, in the morning, the person with the best dream gets to eat all the kheer.” The sergeant and junior dutifully agreed.

The next morning, the Senior Constable summoned the sergeants and asked them to share their dreams. The sergeants insisted that, as he was most senior, the inspector should go first. So he did:

“I had an amazing dream,” began the Inspector. “I dreamt that Barack Obama sent over a private jet to hang out with me. I flew to America, I got the best treatment, pampered, I met all the world leaders that still love him. It was incredible – even the great leaders from history, Gandhi, Mandela, Martin Luther King were all there. We talked, took photos and ate great food.”

The sergeants were very impressed. The inspector then asked the sergeant to go next.

“Well, I had a beautiful dream,” he began. “I went to the Caribbean, and was looked after by a harem of the most beautiful women you could imagine. They fed me grapes, gave me massages and anything my heart desired. The sun was shining, the water was cool and the women were heavenly.”

“Wow!” said both the junior and Inspector. “We don’t think we can beat that.”

The inspector then asked the junior to go but he was reluctant. “Come on,” said the sergeant, “Just tell us what you dreamt.”

“Ok,” the junior hesitated. “I dreamt that two angels came to me in my sleep and told me to eat the kheer.”

“What?” asked the inspector.

“Well, they kept telling me to eat the kheer. I told them I couldn’t because we had this deal with the dreams but they insisted.”

“So what did you do?” asked the sergeant.

The junior pointed lifted the lid from the bowl of kheer and it was all gone.

“WHAT?!” bellowed the Inspector. “Why didn’t you tell us?”

“How could I sir?” said the junior. “You were in America and sergeant was in the Caribbean!”

To be honest, now that I’ve written it out, it’s not the greatest. It’s much better in Urdu. I feel like I should give you another one. 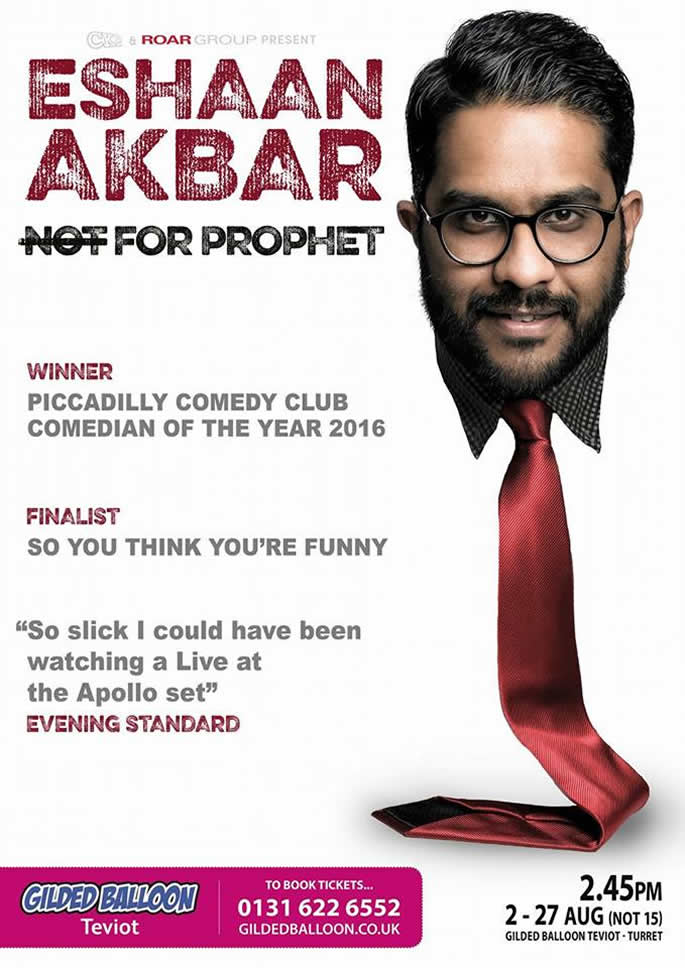 The Punjabi apologised and said: “Sorry, but I’m looking for my wife and I guess I wasn’t looking where I was going.”

The young man says: “That’s ok – weirdly, I’m looking for my wife too – I can’t find her anywhere in this place.”

The Punjabi says: “Well, maybe we can help each other. What does your wife look like?”

The Punjabi says: “Doesn’t matter – let’s look for yours!”

How does it feel to be making your debut at the Edinburgh Fringe?

Exciting and terrifying in equal measure.

I spent 2016 learning how to survive Edinburgh (I ate mac and cheese pie split in half for lunch and dinner) and so am looking forward to doing my show this year. 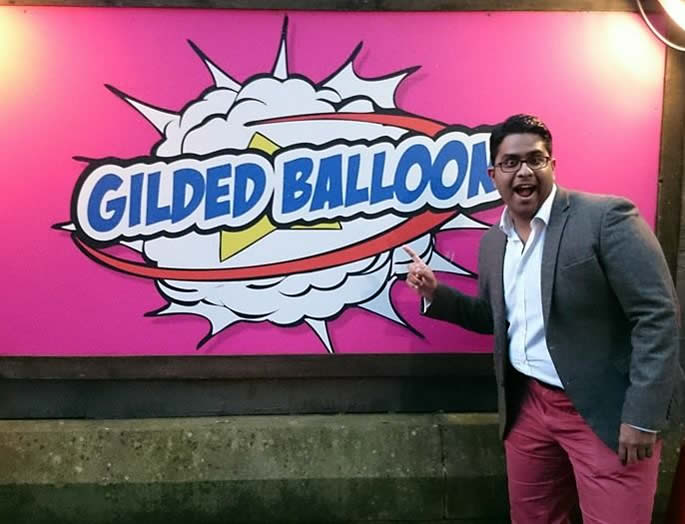 What can fans expect from your show, ‘Not For Prophet’?

They can expect lots of hilarious stories about my family, my school life, my career and my journey through and past Islam. And how it’s all shaped me!

There will be a hymn and a dance too, so plenty for everyone!

With already such a successful experience of performing at the Edinburgh Festival Fringe, this multitalented comedian is set to impress audiences next month.

Since he started performing comedy in 2014, Eshaan Akbar has appeared everywhere from BBC’s Red Button, the comedian Dane Baptiste’s tour and festivals across the UK.

He has participated in the finals of So You Think You’re Funny and Laughing Horse as well as BBC2’s pilot of The Mash Report, which will continue with Nish Kumar as host.

However, DESIblitz can’t wait to see Eshaan Akbar on stage at Edinburgh Fringe Festival for his own show!