Official Online Partners, DESIblitz, brings you all the highlights of this rib-tickling evening! 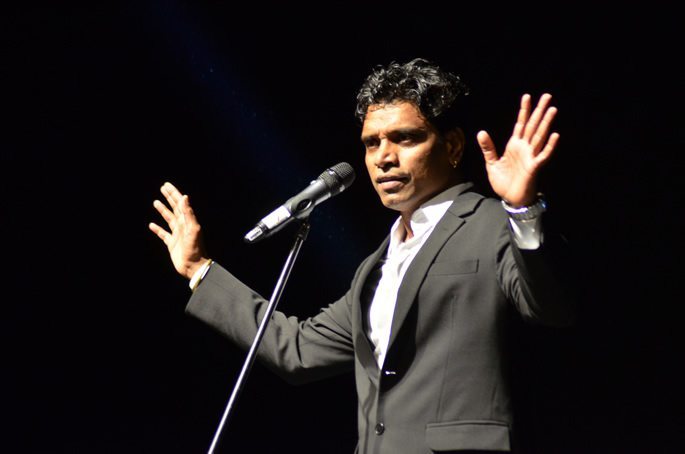 It is common knowledge that Johnny Lever is one of the finest Indian comedians. His younger brother, Jimmy Moses is also a comedy virtuoso.

“I’m very excited for the London show. After many years, I’ve come to London. Two-years-ago we came to Leicester for Jayesh Kotak’s show and we had a blast. I will be performing back-to-back with Jamie and she will give a ‘dhamaal’ performance.”

In his performance, he discussed Indian reality-shows and mimicked hosts like Salman Khan for 10 Ka Dum, Amitabh Bachchan for Kaun Banega Crorepati and Rakhi Sawant for Rakhi Ka Swayamvar.

Jimmy has also starred in many hit Bollywood films such as Chennai Express and Happy New Year. Not to mention Hollywood film, The Heartbreak Kid with Ben Stiller. He even mocks the fact that people recognise him from small roles in films!

What really made the audience laugh, was his punches on Hindi TV serials. One line, in particular, was where he mentioned: “One person is having an affair, yet it’s called ‘Pavitra Rishta’ (pure relationship).”

But that’s not all! It was hilarious to see Jimmy adapt ‘Channa Mereya’ into a song about demonetisation.

Furthermore, his comical take on the rap culture in India was also delightful to watch.

Besides the dancing and singing, the highlight of Jimmy Moses’ performance was when he joked about how celebrities would fly kites during the festival of Makar Sankranti.

Here, he mimicked popular dance steps of actors such as Amitabh Bachchan and Hrithik Roshan. When it came to dancing like Michael Jackson, Jimmy also tore off his vest – which left the audience in stitches!

Star of the Moment ~ Jamie Lever 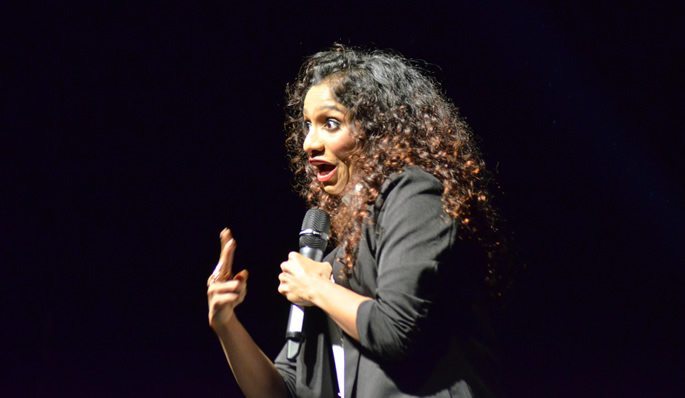 Living up to her father – Johnny Lever’s name, Jamie truly knows how to tickle the audience’s funny bones.

Whilst there are many popular male comedians in India, there are only a handful of female comics. But out of that handful, Jamie Lever is definitely one of the most talented and popular names.

Performing in London was quite a special experience for Jamie. She spoke with DESIblitz:

“I started doing stand-up win London itself in 2012, that was the first time I ever performed on stage in front of a live and ticketed audience. At that time I was an amateur completely, now, I’m coming as a professional.”

She added: “The people of UK have accepted me and they made me believe that I could do comedy.”

Jamie began her act with a comic and social commentary on the way people use mobile phone features as part of their daily speech.

A remarkable and funny moment was when she spoke like a Gujarati to sell a phone using technological language. She spoke so fast, the audience were shocked.

Of course, a Jamie Lever act is incomplete without an Asha Bhosle impersonation. To add a unique twist to her famous impersonation, Jamie sang an Airlines version of ‘Piya Tu Ab Toh Aaja’. The audience went wild over this.

Not only did she sing the ‘Piya Tu’ parody, Jamie also sang a few lines from a Punjabi folk song and Gujarati Garba tracks, in response to which the audience demanded “once more”.

A highlight of this segment was when she imitated Sunny Leone and said: “Yeh Duniya Pittal Di. Baaki Sarri Steel Laxmi Mittal Di.”

Jamie’s performance was fantastic. She performed with utmost energy and enthusiasm – truly a talent like no other. 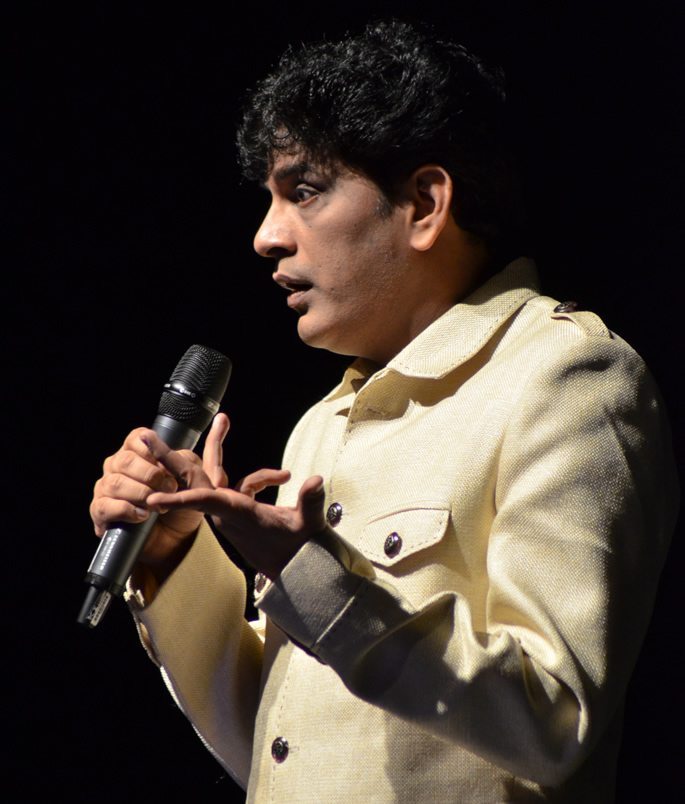 In addition to power-pack comedy acts by Jimmy and Jamie, Vishwajeet Soni and Gaurav Sharma left the audience wanting more.

First up was Vishwajeet Soni, also known as ‘Prem Chopra Jr,’ for his excellent impersonations, TV and stand-up comedy. Soni is currently a character in the hit comedy serial, Bhabhi Ji Ghar Par Hai on &TV.

The Prem Chopra Jr began his act with some terrific imitations of actors like Shakti Kapoor, Nana Patekar and Amitabh Bachchan.

Vishwajeet’s comedy was fresh. In fact, he created a gag where he danced to a modern song ‘Jhumme Ki Raat’ like old actors.

The audience broke out into hysterical laughter as he performed in the style of Dev Anand, Shashi Kapoor, Sanjay Dutt, Raj Kapoor, Jeetendra, Dharmendra and of course, Prem Chopra.

After such a terrific performance by Vishwajeet Soni, stand-up comedian Gaurav Sharma entertained the audience with his witty one-liners, word-plays and shayaris.

Comedy is not solely about imitation and wit, it can also be a way to make social commentary in a light-hearted manner. Gaurav Sharma did exactly this.

Sharma even made jokes on India’s current political situation, which was equally funny. 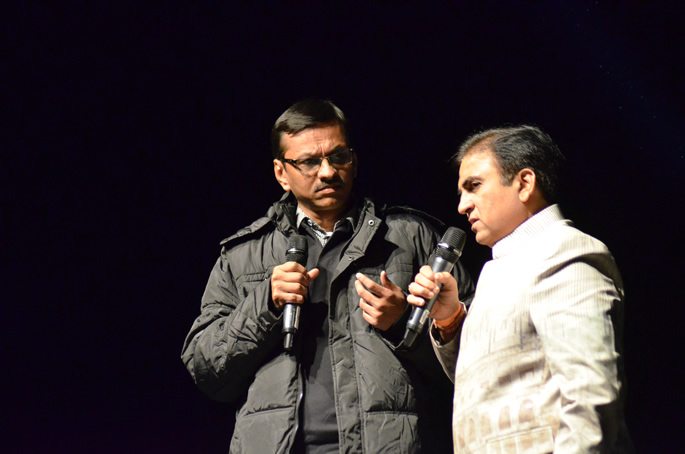 Dilip’s comic timing is the main reason for such a successful show. And he has won many ‘Best Comedy Actor’ awards and accolades for his character since 2009.

TMKOC is in its 9th year and fans continue to shower love on the show. DESIblitz caught up with the two Taarak Mehta stars at Super Six Comedy Night Live.

Dilip Joshi said: “We [him and Shyam] are here as guests of honour. We just want to meet and greet people, fans of TMKOC. We are looking forward to meet our fans. We’ve heard that there are a lot of Taarak Mehta fans here in London.”

Mirroring Dilip’s statement, Shyam mentioned: “We have come specially to meet the UK audience. It feels nice to receive such love and affection from our audience here in London.”

At Super Six Comedy Night Live, Joshi walked through the audience with great pomp and people went crazy to take a quick selfie with the actor.

As Dilip Joshi went on-stage and spoke as the character of Jethalal. Within minutes, Shyam walked on stage as he played a random Gujarati character with a lisp. 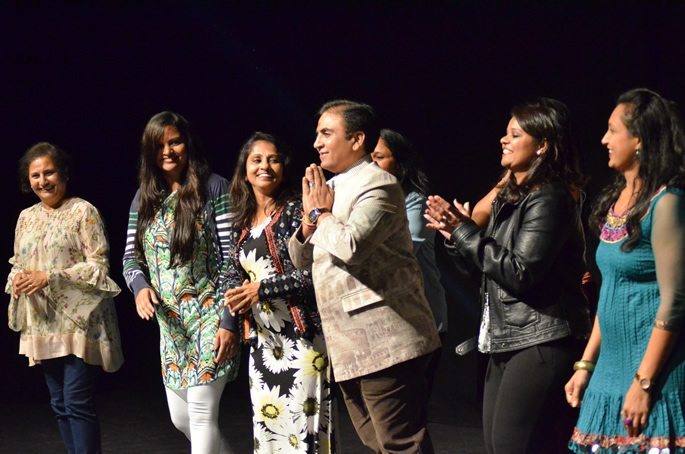 No sooner had Shyam left, Jayesh Kotak appeared on stage and he requested 10 girls to come up and do Garba with their favourite star. All we were missing was Dayaben!

Whilst it was delightful to see Dilip and Shyam, one expected to see a longer comedy stint from the two actors.

DESIblitz congratulates Jay’s Entertainment and team for putting on a full-throttle fun show!

Anuj is a journalism graduate. His passion is in Film, Television, dancing, acting and presenting. His ambition is to become a movie critic and host his own talk show. His motto is: "Believe you can and you're halfway there."
India on Film ~ A Celebration of South Asian Heritage and Culture
How did Priyanka Chopra make $10m between 2016-2017?