Why did Shilpa Shetty smash a Bottle on Rohit Shetty?

In an upcoming episode of India’s Got Talent, Shilpa Shetty is seen smashing a bottle on Rohit Shetty. Find out why?

In an upcoming episode of India’s Got Talent, Shilpa Shetty breaks a bottle on Rohit Shetty’s arm.

The Bollywood filmmaker will appear as a guest judge on the reality talent show.

Shilpa, who is one of the judges on the show, shared a behind-the-scenes video from the set, asking Rohit for a film in a unique way.

In the video, Shilpa is seen calling out to the director.

But he ignores her and he continues to speak to rapper Badshah.

This does not go well with Shilpa and she grabs his attention by breaking a bottle on his arm.

As a stunned Rohit looks on, Shilpa screams:

“Rohit cast me in one of your films.”

The filmmaker replied: “Are you mad? You spoiled my suit.”

Badshah then jokes that his phone has many pictures that he could airdrop.

In response, Shilpa breaks the rest of the bottle on Badshah’s arm. Badshah then lets out a scream.

The video was captioned:

“My head is hot like a kettle right now. I broke a glass bottle. Don’t mess with me, okay?”

Many took to social media to give their opinion on the video.

One person said: “Big fan of you ma’am.”

“Wow Shilpa! You sure know how to get any guy’s attention alright!!” 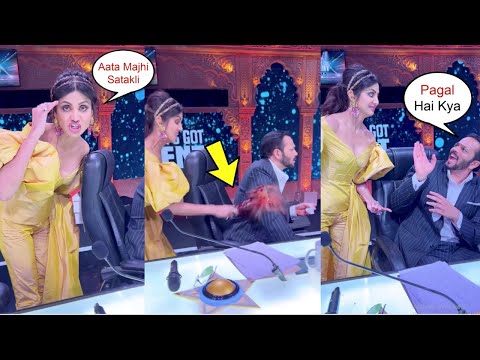 Previously, Sony TV shared a promo video in which Rohit and Shetty were seen performing from Chennai Express.

India’s Got Talent is one of India’s most popular shows. In addition to Shilpa Shetty and Badshah, the other judges are Kirron Kher and Manoj Muntashir.

Previously, Dharmendra and Jackie Shroff have appeared on the show as guest judges.

On the acting front, Shilpa Shetty made her Bollywood comeback in Hungama 2. The film was released in 2021 on Disney+Hotstar.

Her next film, Nikamma, starred Abhimanyu Dassani and Shirley Setia.

It was initially set to be released in June 2020, however, it was indefinitely postponed due to production halt and theatres shutting down due to the Covid-19 pandemic.

The film will be directed by Sonal Joshi and produced under the banners of Gulshan Kumar and Bhushan Kumar’s T-Series in association with Vikram Malhotra and Shikhaa Sharma’s Abundantia Entertainment.

Dhiren is a journalism graduate with a passion for gaming, watching films and sports. He also enjoys cooking from time to time. His motto is to “Live life one day at a time.”
Indian TV Host shouts at Wrongly named Ukrainian Guest
Sunny Leone sets Screen Alight in Spy Thriller Series ‘Anamika’