A man from Leicester has been jailed for carrying out a bottle attack on a man in a bar. The incident left the victim “scarred for life.”

"He found it depressing being scarred for life"

Perminder Singh Rana, aged 38, of Leicester, was jailed for five years and six months after a bottle attack in a busy bar left his victim “scarred for life.”

The incident happened on December 23, 2017, at around 2 am inside The Terrace on Albion Street.

Rana smashed a bottle into a man’s face after he was bumped into.

The prosecutor James Bide-Thomas told Leicester Crown Court that the victim was “enjoying himself” when he accidentally bumped into Rana and immediately apologised. Mr Bide-Thomas said:

“About two minutes later he went outside for a cigarette and saw the defendant coming down some steps and started to apologise a second time.

“The defendant pushed him to the chest and a couple of seconds later hit him around the face with a glass object, a bottle, which smashed and sprayed shards of glass.

“He says his Christmas was ruined, as it happened on December 23.

“He had a holiday to Las Vegas, which he went on and had to put up with questions throughout, because of the swelling and wounds.

“He was anxious about going into the city centre in Leicester for a considerable time afterwards.

“He paid £700 for some private treatment in an attempt to reduce the visibility of the scar.

“When he had reconstruction surgery (a year later), in December 2018, the surgeon found a piece of glass was embedded in his face, and he still bears scars on his face.

“He found it depressing being scarred for life, but has started going out again.”

Rana injured his own hand in the attack. He was later arrested by DC Simon Newcombe after connecting the injury to the bottle attack.

When interviewed, Rana said he could not remember the bottle attack due to being intoxicated. Judge Philip Head told Rana:

“It was a disgraceful and a violent attack.

“You were drunk and it’s yet another example of early hours city centre unprovoked violence in a pub or club.”

“The victim behaved admirably the first time he apologised and also the second time.” 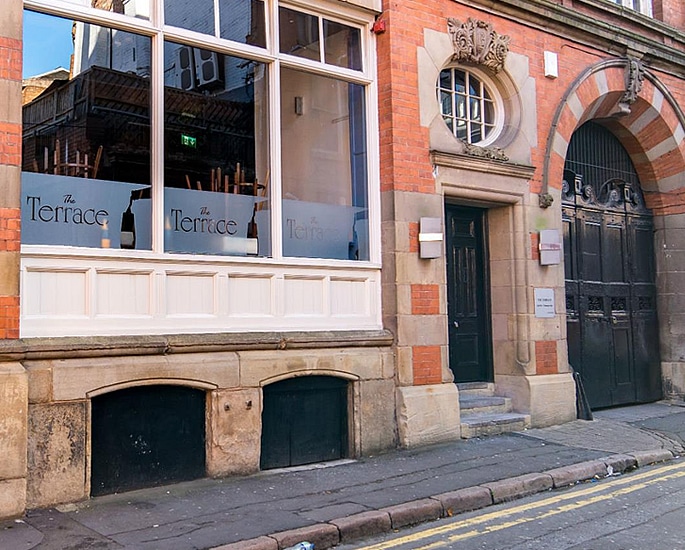 He told Rana: “You have an unattractive record with previous matters for disorder and violence – with two convictions for affray in 2003 and 2006 – although that was a long time ago and there’s been nothing since then.

“You’re now a family man with responsibilities for a wife and children.

“Notwithstanding those responsibilities you were out having too much to drink in the city centre.

“I’m told you don’t normally drink and that may have been why you were so affected by it.

“Your victim accidentally collided with you and immediately apologised and when he went outside he was facing up some stairs when you emerged, it was a chance encounter.

“He was speaking to you, to apologise again, but you didn’t accept that and pushed him hard on the steps.

“You flung yourself at him and swung out with a bottle into his face, smashing it, causing a six-inch cut from his forehead through his eyebrow and onto his cheek.

“He and you are extremely lucky the eye wasn’t involved.”

“At hospital it required 30 stitches and despite treatment, involving private surgery, the scar is and always will be visible.

“I’m satisfied it wasn’t pre-meditated, it was an unhappy chance, when you went outside and came face to face with him.

“I’ve read a number of references from your family and friends that shows a positive side to you and you managed to put your past behind you.

“This happened two years ago; I’m told you weren’t charged for 18 months and I’ve been given no explanation about that.

“However, you didn’t plead guilty until a very late stage.”

In mitigation, Vasanti Vaitha explained that Rana was a family man who was remorseful for his actions towards the victim.

The consequences of Rana’s actions were also stated to which Judge Head responded:

“That’s something he should have in mind when he was out being drunk and violent in the city centre – he should have thought of the consequences of his actions.”

“My suspicions arose around Rana, given his injury, and that he matched a description given for the suspect so I actioned the arrest.

“It was a matter of piecing together the information we had that current time and being in the right place at the right time.”

Dhiren is a journalism graduate with a passion for gaming, watching films and sports. He also enjoys cooking from time to time. His motto is to “Live life one day at a time.”
Semi-Naked Indian Transgender Women attack Police in Public
Bangladeshi MP ‘hired 8 look-alikes’ to Take Her Exams