Ranbir Kapoor rocks back in action in Yeh Jawaani Hai Deewani and has an exclusive gupshup with DESIblitz about the film with his ex Deepika Padukone.

"I was at the right place at the right time. I got these opportunities and I was intelligent enough to grab it."

Born into Bollywood royalty, this young actor was destined for stardom, and let’s be honest, he most definitely deserves it.

DESIblitz caught up with Ranbir in an exclusive Gupshup about his love-life and new film, Yeh Jawaani Hai Deewani.

After this fantastic honour he went on and earned critical acclaim in Wake Up Sid, Ajab Prem Ki Ghazab Kahani and Rocket Singh: Salesman of the Year, all of which in 2009! 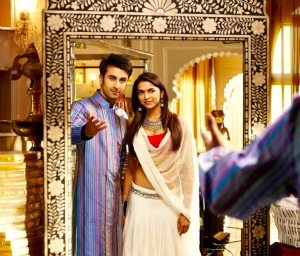 Ranbir has a huge amount of talent with the rare ability to portray any kind of character and that was achieved in Raajneeti (2010) where he played the role of an aspiring politician and he won Filmfare Critics Award for Best Actor.

In addition he won Filmfare Critics Award for Best Actor for Rockstar the thrilling drama directed by Imtiaz Ali.

We fell in love with Kapoor the young sweetheart in Barfi!, which won him his second Filmfare Award. Who would forget this touching story where Ranbir plays a deaf and mute cheeky chappy? If you still haven’t seen it, where have you been? It’s a must watch for any Bollywood/Ranbir fan!

“Batameeze Dil, Batameeze Dil Mane Na.” We have all been humming this catchy tune for a while now. A vibrant, energetic and catchy tune from Ranbir’s latest venture, Yeh Jawaani Hai Deewani.

DESIblitz to see can’t wait Ranbir in another romantic comedy; it has been a while since Barfi! was released. The cute Kapoor will be seen opposite dimple delight Deepika Padukone. 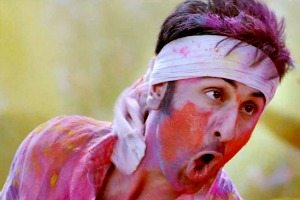 Working with an ex on set who also plays your love interest. That’s got to be a little awkward, right? Well not really, thinks Ranbir:

“See, when you have such a pretty smile, such a pretty actress working opposite you, you automatically can act like you’re in love. It’s not hard to act in love with her,” he says.

On a more serious note, Ranbir admits: “To be honest, Deepika and me came onto this film individually, because we liked our parts. We came as individual actors and with no baggage. Even when Deepika and me broke up, we never lost touch. We maintained a friendship and I think we’ll maintain that all our lives.”

“So I think it’s a bit over-hyped, especially by the media. It’s actually better. We understand each other better. We talk more now. We are more free with each other and we had an amazing time working on this film.” 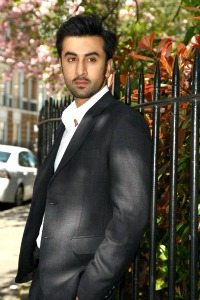 The story revolves around the relationship between Bunny (played by Ranbir Kapoor) and Naina (played by Deepika Padukone). The film presents them at two different points of their lives.

The first is at college where they have to make serious decisions that will map out their lives, and secondly when they are in their mid-twenties and wish to fulfil their every dream before they get old.

How these two characters change and grow, and eventually fall in love with one another is a journey the audience are taken on.

Director Ayan Mukerji insists: “The journey from a 21-year old to a 30-year old has had shades of all kinds. As the rest of life will too, undoubtedly. But there is something about one’s first tryst with adulthood which is particularly powerful.

“A kind of rawness, a lack of lived experience, no way of truly knowing what lies at the end of the road one is walking on, a constant seeking in the dark for the moments where life is full of light.”

Interestingly, Ranbir admits that this film was a lot harder to figure out than critically-acclaimed Barfi! Speaking about Ayan’s directing, Ranbir said:

“He’s a slave driver. He makes sure you exhaust yourself, emotionally, physically. I think he’s one of the finer filmmakers I’ve ever worked with. Very original. He really has something to say through his movies.” 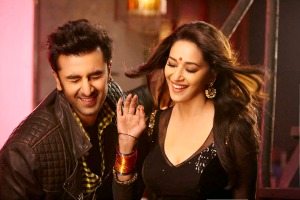 “I am grateful that I got to work with such good directors. I was at the right place at the right time. I got these opportunities and I was intelligent enough to grab it,” Ranbir adds.

If you thought the movie masala couldn’t get any better, it has been announced Madhuri Dixit is doing an item song called ‘Ghagra’, alongside Ranbir Kapoor and he even steals a kiss from the actress.

Ranbir reportedly had to beg Ayan to be allowed to kiss Madhuri and it seems the lucky chap had his dreams come true.

Although Deepika didn’t join in on the dance, she had much to say about her dancing idol:

“I love Madhuri. She dances with her face I feel. It’s just not her steps or what her body is doing. He face is emotive and how! You put a camera on her face and you’ll understand what she’s trying to communicate. It’s a God’s given gift and not everyone has that.”

Madhuri looks amazing and we can’t wait to see her dancing on the big screen. Such a beautiful lady with her graceful and flawless dancing. We have missed you!

Yeh Jawaani Hai Deewani has fun, light-hearted entertainment stamped all over it. With the added bonus of Bollywood’s man-of-the-moment, Ranbir on top, this film promises movie magic delight.

Make a date in your diary and take your loved ones with you, this is definitely one film not to miss out on! Yeh Jawaani Hai Deewani is released on May 31, 2013.

What did you think of Yeh Jawaani Hai Deewani?

Anisha has lived and breathed Bollywood since she was young! She loves everything Desi and would like to become an actress in the future. Her life motto is " Zindagi nahin milti hai baar baar, toh khul ke jio aur haso - umar beeth jaati hai..."
Winners of IIFA Technical Awards 2013
Salman Khan marrying Romanian actress Iulia Vantur?