Priyanka and Nick Wedding illustrated with The Simpsons

Priyanka Chopra and Nick Jonas got married in early December 2018. The couple’s wedding has been illustrated as characters appearing on The Simpsons.

The image has all the hallmarks of a Simpsons cartoon scene

The grand wedding of Priyanka Chopra and Nick Jonas was one of the biggest celebrity weddings in 2018 and brought together east and west in a very lavish and extravagant way.

The wedding grabbed headlines both in India and America with lots of coverage and even a piece by the New York Time publication ‘The Cut‘ which caused some outrage due to its racist slur.

Now, two images of the memorable wedding have been unveiled by Priyanka on her Instagram which depicts the couple in the presence of The Simpsons.

The images have been drawn and illustrated by two artists who ‘Simpsonize’ you.

The first image illustrated by Rino Russo shows Priyanka and Nick in their Indian wedding attire. 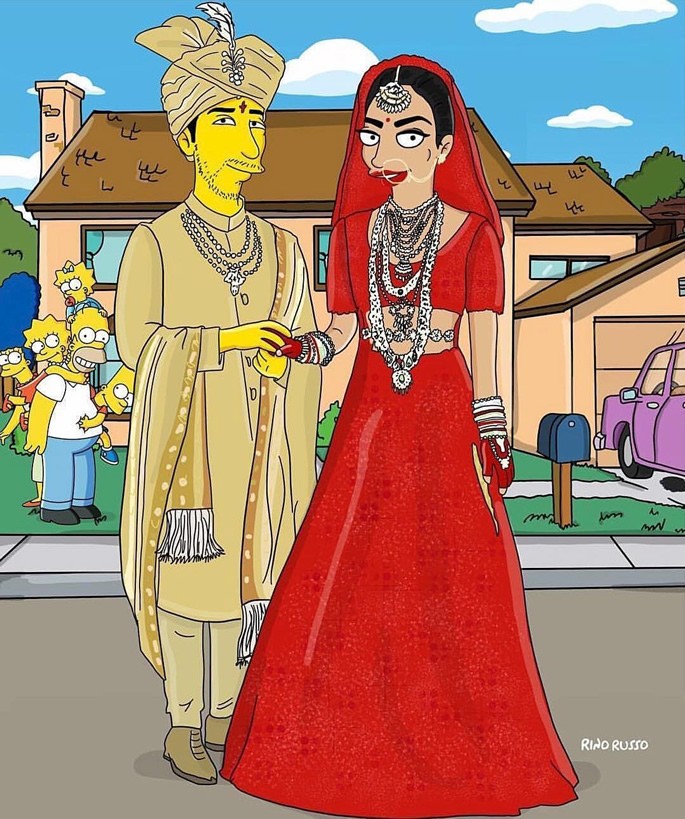 The image has all the hallmarks of a Simpsons cartoon scene with the facial characteristics of characters in The Simpsons with the protruding upper lips.

It shows the Simpson family in the background on the left behind Nick like neighbours who are onlookers to the couple having a photo taken.

Priyanka chose to wear a Sabyasachi bridal lehenga at her Indian ceremony and Nick wore a fetching gold sherwani.

The Simpsons drawing shows the couple in their outfits posing for the shot holding hands. Although Priyanka’s hands do look a little too red if that is meant to resemble her mehndi! 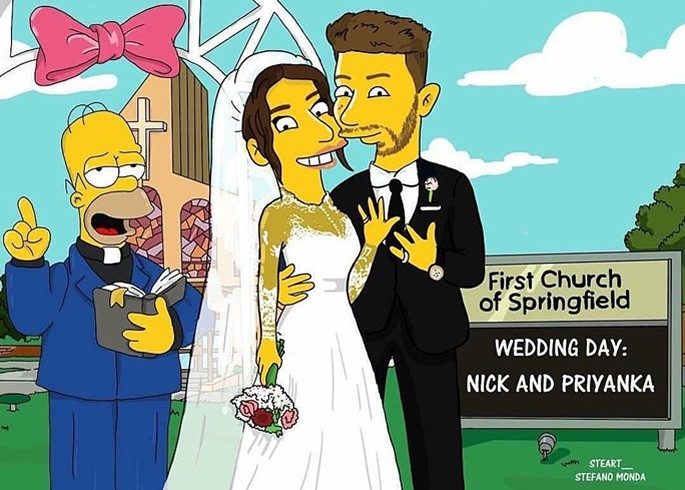 The second image which has been illustrated by the artist Stefano Monda shows the Christian ceremony which Priyanka and Nick had.

Showing them standing outside the ‘First Church of Springfield’, the fictional American town of where The Simpsons series is set.

In this drawing, Simpson Homer is the vicar standing behind them who is officiating the wedding ceremony.

The dress was hand-embroidered and featured partly sheer arms with scalloped sleeves and a high-neck collar. Priyanka also wore a 75-foot long tulle veil to finish the look.

The Simpsons image shows the couple in exactly the same attire and showing off their wedding rings on each of their hands.

It can, therefore, be said, that Priyanka is the first Indian actress to have her wedding immortalised in The Simpsons cartoon form!

Nazhat is an ambitious 'Desi' woman with interests in news and lifestyle. As a writer with a determined journalistic flair, she firmly believes in the motto "an investment in knowledge pays the best interest," by Benjamin Franklin.
Winners of Asian Viewers Television Awards 2018
Bollywood Films to Look Forward to in 2019