Preparations are underway for the wedding of Priyanka Chopra and Nick Jonas in Jodhpur. The couple will tie the knot from November 30 to December 2, 2018.

"People will need vacations after this wedding."

Preparations are in full swing for the imminent wedding of Priyanka Chopra and Nick Jonas.

The couple will be tying the knot in a three-day extravaganza from November 30 to December 02, 2018. Nick and Priyanka have chosen the grand Umaid Bhawan Palace in Jodhpur, India as their wedding venue.

The loved-up pair first met at the 2017 Met Gala when they were both walking for designer Ralph Lauren. The two instantly hit it off with each other.

After a whirlwind romance and plenty of dating rumours, the two officially announced their engagement in August 2018, celebrating the occasion with close family and friends.

As their wedding day draws closer, Priyanka and Nick have been busy enjoying pre-wedding festivities before their big day.

Anticipation is at an all-time high as the couple are about to tie the knot, with many speculations about what the bride will be wearing and who will be attending the wedding. 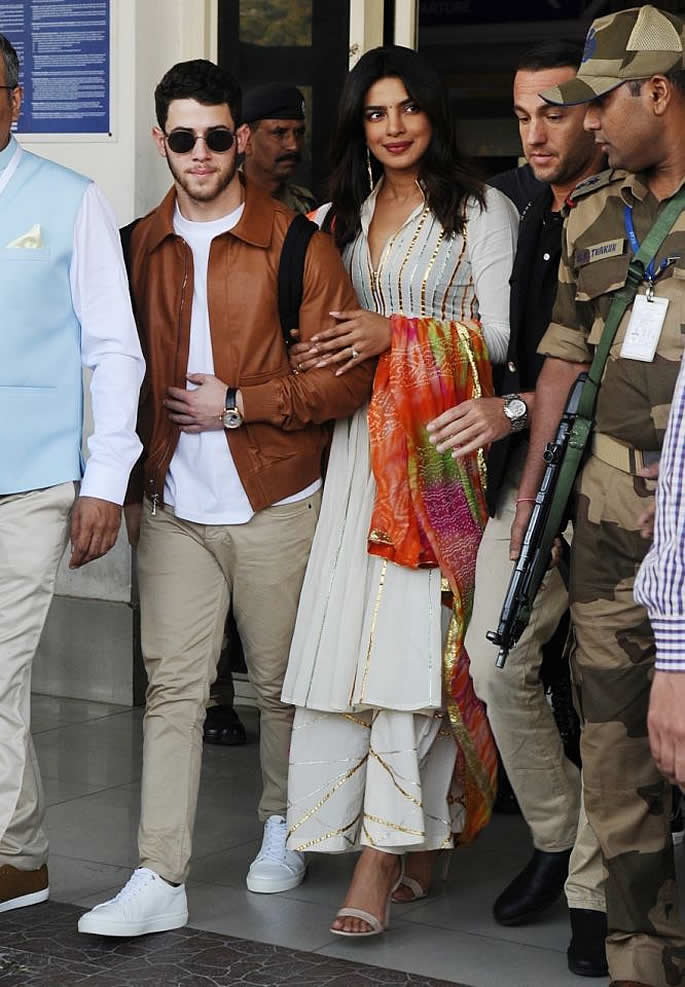 Pre-wedding festivities began on November 22, 2018, when Nick arrived in India.

Priyanka welcomed Nick by posting a loved-up picture of the two on Instagram. She captioned it: “Welcome home baby.”

The pair celebrated with a lavish Thanksgiving dinner with family and friends in Delhi. NickYanka as they are known to fans then hosted a pre-wedding dinner in Mumbai.

The event was attended by Nick’s brother Joe Jonas and his fiancee, actress Sophie Turner from Game of Thrones (2011).

In accordance with her beliefs, the couple attended a puja (prayer ritual) at Priyanka’s mother Dr Madhu Chopra’s home in Mumbai.

The bride to be was wearing a light blue traditional Indian suit with pink embellishments. In sync with Priyanka, Nick wore a pink kurta with a cream pyjama.

The two looked happy as they posed for pictures. The soon to be married couple touched down in Jodhpur for their wedding on November 29, 2018.

Sangeet and mehndi ceremonies take place before the wedding day.

Many distinguished guests have been pictured after reaching Jodhpur for the joyous occasion. Bollywood couple Anusha Dandekar and Karan Kundrra were seen arriving early at Jodhpur airport.

Singer-actress Manasi Scott has made it to the Rajasthan city, along with Salman Khan’s younger sister Arpita Khan Sharma. Arpita and Priyanka have been close friends for years, often supporting one another at events.

Designer Sabyasachi was spotted in Jodhpur, leading to speculation that Priyanka could be wearing one of his designs.

Priyanka’s cousins and fellow actresses Parineeti Chopra and Mannara Chopra landed in Jodhpur also. Parineeti Chopra was all smiles as she waved at the cameras, ready for her cousin’s wedding.

According to reports, several A-List stars are expected to attend the lavish wedding. YouTube sensation and friend of the couple, Lilly Singh aka Superwoman is supposed to make an appearance.

Additionally, Hollywood stars Dwayne ‘The Rock’ Johnson and Lupita Nyong’o are reportedly on the guest list. 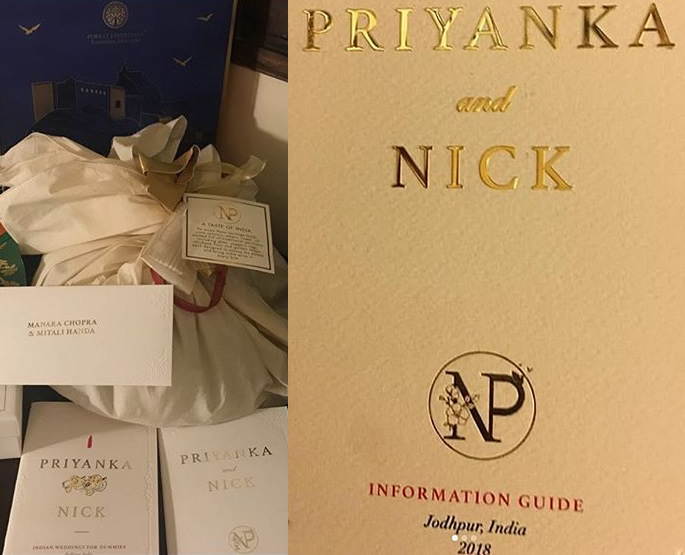 Despite there being somewhat of a social media embargo, some guests of the couple have already begun sharing images of their welcome gifts.

It seems Nick and Priyanka have gone the extra mile for their guests, gifting them a welcome pack called “Oh Shit Kit.”

As visible on the information guide, the couple have produced a joint monogram using the first letter of their first names. Hence NP is clearly displayed, reflecting the loving union between the two.

No information has been disclosed as to what is mentioned inside the guide. It will be interesting to see if there is an element of surprise attached to it.

According to the Daily Mail, guests have also received a custom coin.

The Venue, Dress, Ceremonies and Menu 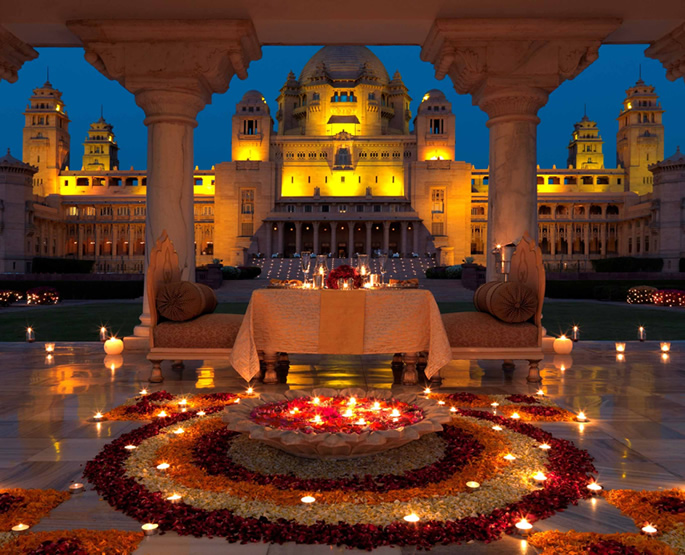 The Umaid Bhawan Palace in Jodhpur has been lit up in preparation for the relevant functions. The palace is full of gleaming lights and flower displays.

A huge anticipation is in the air for the reveal of who is designing Priyanka’s wedding dress.

Several media outlets are suggesting that the bride will be wearing a custom Ralph Lauren design. This would be fitting as the pair met whilst walking for Ralph Lauren at the 2017 Met Gala.

However, the bride will have several outfit changes, therefore, she could wear other designers also.

The couple will be having two ceremonies according to their respective beliefs, a Christian ceremony and a Hindu ceremony.

Nick’s father Paul Kevin Jonas who is a pastor will officiate their Christian ceremony.

According to a report by DNA, guests will be enjoying seven different types of cuisines – Punjabi, Rajasthani, Hyderbadi, Italian, Mexican, Continental and Chinese.

In an interview with Vogue Magazine, Priyanka jokingly said: “People will need vacations after this wedding.”

Anticipation is building for Nick and Priyanka’s big day, with everybody talking about it.

We can’t wait to see the happy couple as they get married.

Hamaiz is an English Language and Journalism graduate. He likes to travel, watch films and read books. His life motto is “What you seek is seeking you”.
7 Next Generation Star Kids that could take Bollywood by Storm
Pinky Memsaab: a Pakistani Female-Focused Film