"We are ready to serve this country. That is what we fought the election for"

The British public took to their local polling stations on Thursday 8th June 2017 to place their votes in the UK General Election. The final outcome – an extraordinary political swerve for Labour leading to a hung Parliament.

Prime Minister Theresa May’s political gamble has been unsuccessful, as she now clings onto her PM title with both hands. She had announced the snap general election only a few months prior on 18th April.

It was seen by many as a tactical ploy to increase her majority in the House of Commons, and so, secure May’s authority to pave a strong entrance into Brexit negotiations.

Astonishingly, what was projected to be an easy win for May and her “strong and stable” Conservative government quickly gave way following the reveal of the Exit Polls.

Pitched soon after polling stations closed at 10 pm on Thursday evening, the forecast suggested that the Conservatives would remain the largest party but have no overall majority in the House of Commons.

While reporters and MP’s mused with strong scepticism over the reliability of the poll, this prediction became more accurate as the night wore on.

In the end, of the 650 Parliamentary seats, the Conservative party took 318 while Labour took 261. As 326 seats are needed to form a government, this has created a remarkable upset in Theresa May’s political agenda.

Here are the final results of the 2017 UK General Election:

The local elections also saw success for many British Asians standing in their constituencies. Labour’s Preet Gill was elected as the first Sikh woman MP. Gill overtook Gisela Stuart to take the seat for Birmingham Edgbaston. She said after her win:

“It’s a real honour to be representing the people and the place where I was born and raised.

“We’ve had a really strong campaign, a really good team of people here in Edgbaston and it’s just been phenomenal. I’m really excited to learn more and really connect with communities.”

“Representation matters, guys. Labour has a Sikh woman and a turbaned man as MPs for the first time in history. Will matter a LOT.”

Also winning in Birmingham were Shabana Mahmood for Ladywood, and Khalid Mahmood for Perry Barr. 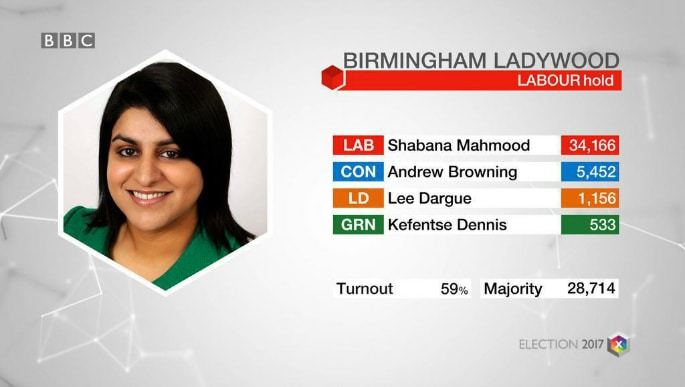 Keith Vaz also held onto his seat for Leicester East with an overwhelming majority. The Labour MP said after his win:

“If Theresa May does not increase the number of seats for the Conservative Party then I think she would have to consider her position, as would any sitting Prime Minister.”

In Ealing Southall, Virendra Sharma kept his Labour seat, while Tulip Siddiq also won by a significant share for Labour in Hampstead & Kilburn.

Here are the winning Asian MP’s of the 2017 UK General Election:

On the other side of the spectrum, UKIP who have been very vocal in the last few months, recorded significant losses as they failed to win any seats.

Their popularity which was at an all-time high in 2015 with 3,881,099 votes. This drastically dropped to only 593,852. Following his loss, party leader Paul Nuttall stood down with “immediate effect”. 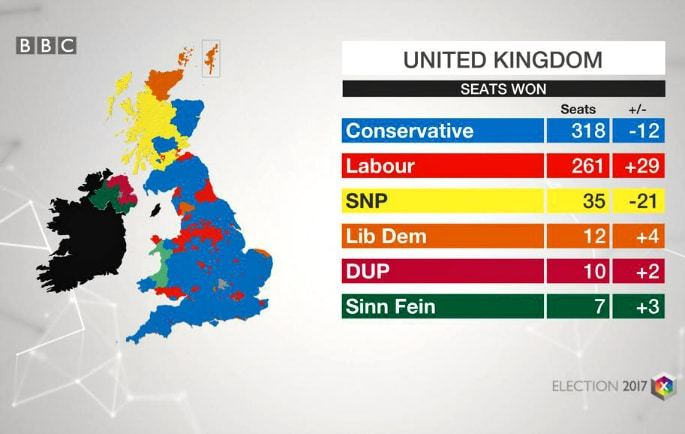 As the Conservative majority takes a hit, what has been the surprise turn of this election is the incredible gains made by Jeremy Corbyn and the Labour Party.

The Party, which has been very publicly battling with itself over its unorthodox leader, showed signs of a resurgence after winning 29 seats.

Much of this has been put down to the election’s surprising youth turnout, of which Jeremy Corbyn has been at the helm. The Labour leader has been receiving support from a number of British Asian stars, including Riz Ahmed, Guz Khan and Tez Ilyas.

Big up Jezza for reviving so many ppls hope in politics. If Labour was united behind Corbyn this past year he coulda won this outright!

Initial estimates from Sky News Data suggest that the turnout of 18-24 year-olds was 66.4 percent, a huge increase from 43 percent in 2015.

Many younger voters favoured Corbyn’s “straight-talking” mandate and showed their full support, resulting in a “swing election for Labour”. His promise to abolish tuition fees was also a popular agenda among voters. Indeed, Labour performed strongly in predominantly student areas such as Sheffield and Canterbury.

In the run-up to the election, the number of young people registering to vote was also found to be the highest of any age group.

57,987 people under 25 registered to vote on the day of the election announcement, while 51,341 people aged between 25 and 34 years also registered.

It is clear that Britain’s youth wanted to be heard – and they were. Many commentators believe that their success has changed the political landscape forever.

Looking Ahead to Brexit 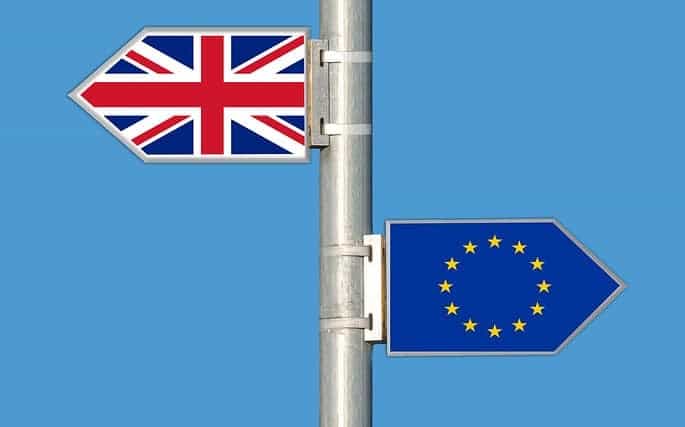 Her stronghold in Parliament has slipped dramatically. Many from opposing parties, including Jeremy Corbyn, called on her to resign as Prime Minister.

“Two, she runs it in a poor way and what is looking like an easy win, she turns into a minor defeat.”

Jeremy Corbyn may have considered the possibility of forming a minority government with the SNP, Liberal Democrats, Green Party and Plaid Cymru. Yet, this can only take their number to 313 – less than the 326 seat requirement.

Speaking to the BBC, Corbyn said: “We are ready to serve this country. That is what we fought the election for.”

However, May seems determined to ensure a “stable” government and has been in talks with Northern Ireland’s DUP. Together they have a majority of 329 seats.

On 9th June 2017, Theresa officially announced that she had visited Buckingham Palace and would now seek to “form a government”:

“What the country needs more than ever is certainty.

“And having secured the largest number of votes and the greatest number of seats in the General Election, it is clear that only the Conservative and Unionist Party have the legitimacy and ability to provide that certainty by commanding a majority in the House of Commons.”

It has not been an easy victory for May. The Labour swing has certainly damaged her position. Can her continued hold on the PM title offer the UK the stability it so yearns ahead of our exit from the EU? It remains to be seen.