Highlights of Priyanka and Nick’s Extravagant Wedding in India

Priyanka Chopra and Nick Jonas’ lavish wedding in India saw the bride and groom enjoying every minute. We bring some highlights of their blissful union.

"Priyanka Chopra makes for a stunning bride in a custom red Sabyasachi lehenga."

After an opulent and extravagant wedding weekend, actress Priyanka Chopra and singer-songwriter, Nick Jonas, reveal to the world some wonderful highlights of their union.

The wedding took place in Jodhpur’s Umaid Bhawan Palace in India and without doubt, it lived up to its expectations.

Priyanka wore a custom couture creation by Ralph Lauren for her Western ceremony and for the lush Indian ceremony, she opted for Bollywood bridal favourite, Sabyasachi Mukherjee.

DESIblitz brings you the highlights for a further look at the couple’s love-filled wedding weekend. 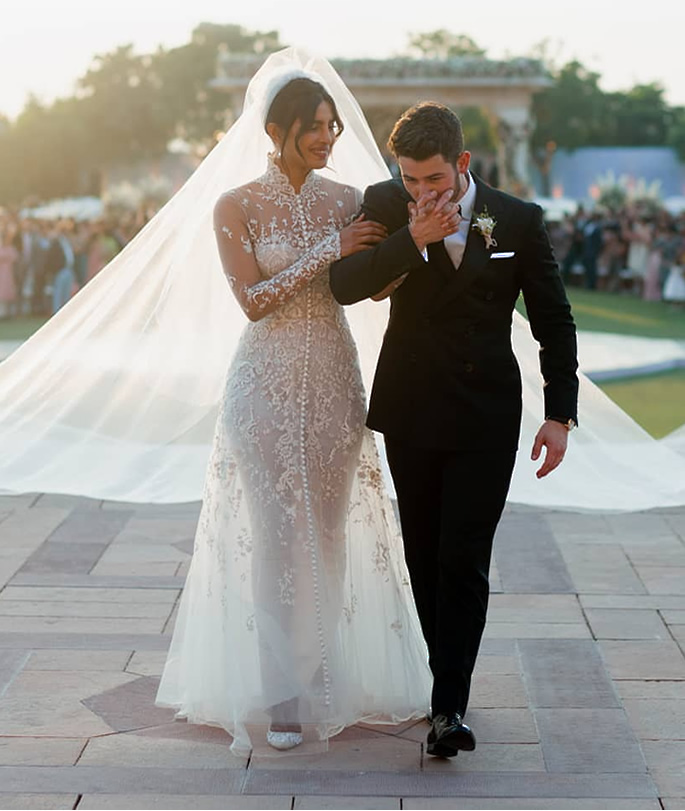 Priyanka was seen at her Western wedding to Jonas wearing a beautiful Ralph Lauren creation.

This bridal attire took 1,826 hours to craft, the dress also had a strapless column dress made up of 2,380,000 mother of pearl sequins to add an elegant shimmer to her lace dress.

The lacework itself was particularly breathtaking as Chopra opted for a rather conservative and traditional Western bridal look. 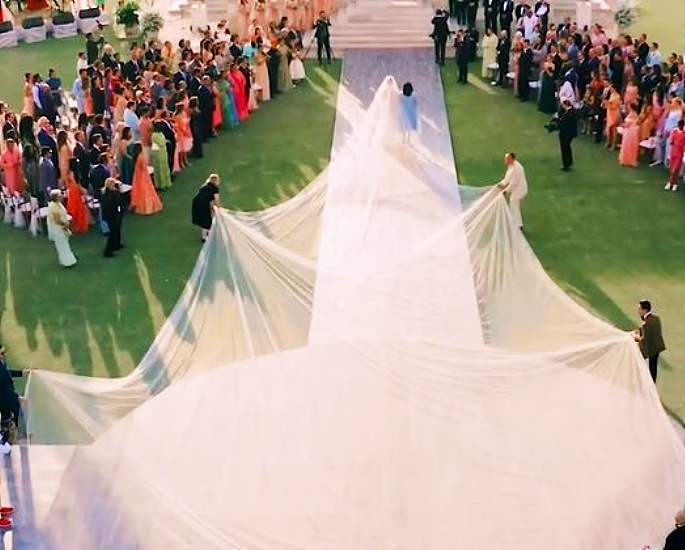 The most awe-inspiring part of her bridal wear was the extravagant train which reached up to 75 feet in length. 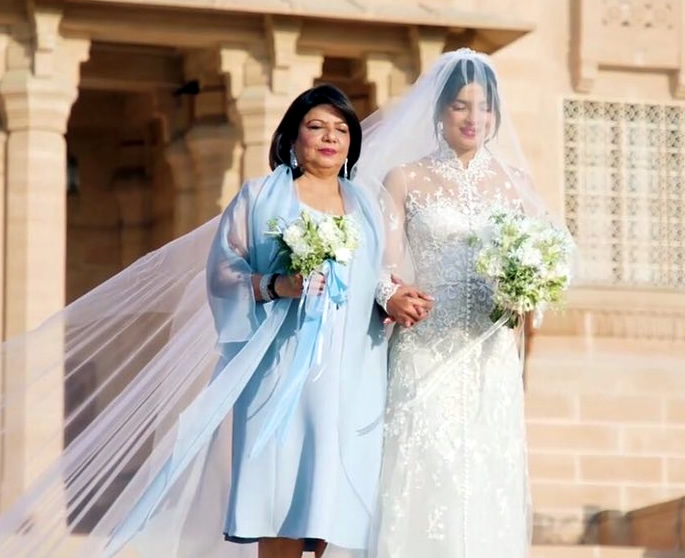 Chopra was glowing in her delicate lace wedding dress as she walked down the aisle escorted by her mother, who wore a beautiful baby blue Ralph Lauren dress. 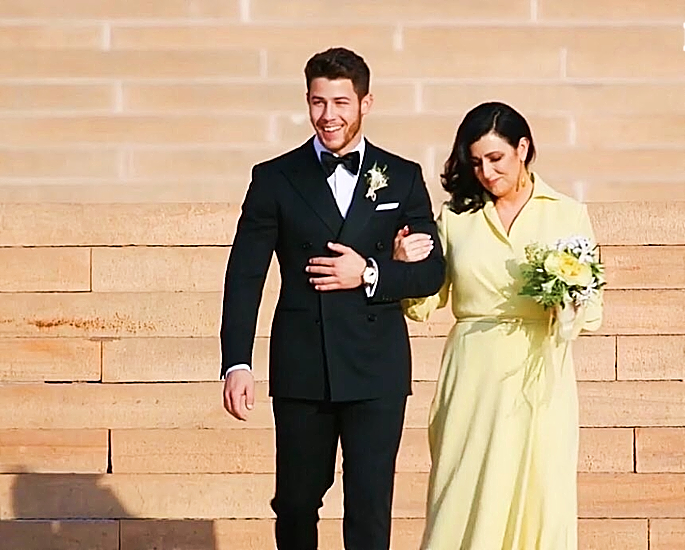 Nick was very dashing in his Ralph Lauren tuxedo also, the fit was perfect on the groom.

He walked down the aisle with his mother on his arm, she too wore a Ralph Lauren dress in a muted yellow tone.

Priyanka explained to People magazine what an overwhelming experience her Western wedding was:

“It was all tears. All tears.”

The actress highlighted how she felt emotional once the doors opened and she saw Nick waiting for her at the bottom of the aisle.

Her joy and contentment were all too clear to see.

After the western ceremony which was said to be performed by Nick’s father, ex-pastor Paul Kevin Jonas Senior, the couple posed with the bridesmaids, topped with a loving kiss. 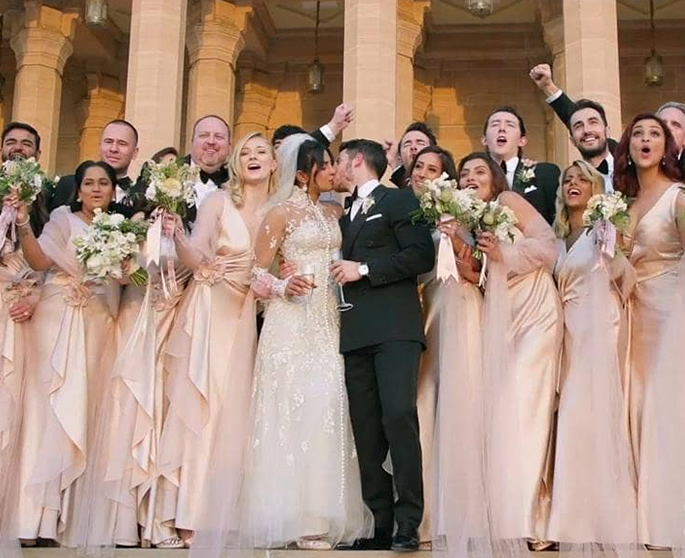 Priyanka then swapped her veil out for the reception so that she could party and move more freely. 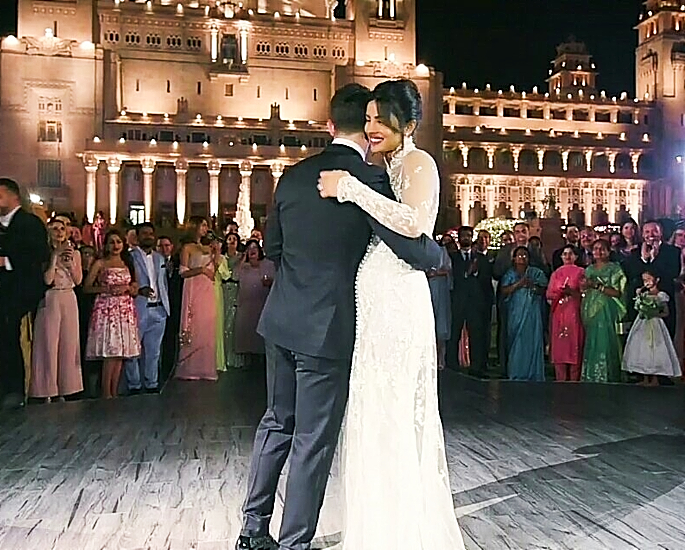 She was seen smiling brightly as she swayed with Nick for their first dance.

Here’s a delightful video compilation of their western wedding and mehendi: 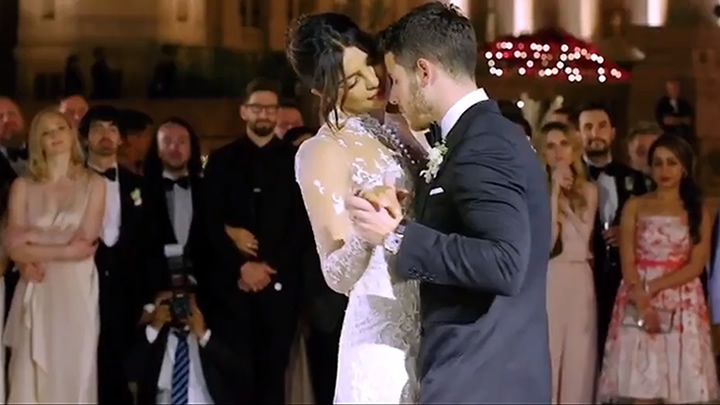 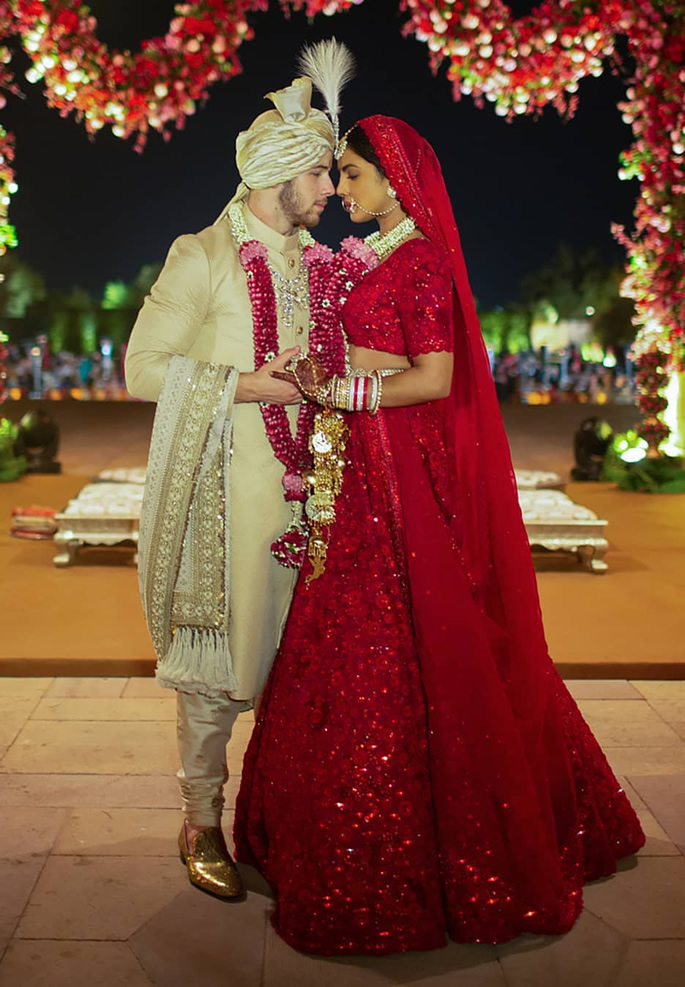 With 3,720 hours spent on this lehenga, it’s no wonder the result was so stunning.

It took 110 embroiderers from Calcutta, India to craft the hand-cut the organza flowers, French knots in silk floss and layers of thread work.

Sabyasachi’s work is always focused on traditionalism and attention to detail, as highlighted by his creation for recent bride Deepika Padukone.

Interestingly in a sentimental gesture, Chopra requested the designer to sew the names of her fiancé and her parents, Ashok and Madhu into the waistband of her lehenga.

Chopra was very close to her father who passed away in 2013 and so to incorporate him in her big day she had these names sewn in her native language.

The lehenga itself is very reminiscent to a bridal couture piece Sabyasachi designed back in 2016.

While the original design had a more provocative cut, Chopra opted for a traditional blouse style for her wedding lehenga.

“Priyanka Chopra makes for a stunning bride in a custom red Sabyasachi lehenga.”

Chopra’s bridal jewellery was inspired by the Mughal era.

Her necklace was made up of uncut diamonds, emeralds and Japanese cultured pearls in 22 karat gold.

Priyanka most certainly opted for a lavish and traditional look for her Indian bridal wedding look and Jonas followed suit.

Nick wore a hand-quilted silk sherwani in a shade of muted gold.

His chikan dupatta was hand-embroidered and his kalgi was rose-cut with a Syndicate diamond necklace to set his look.

The couple blended both their cultures seamlessly with these two breathtaking ceremonies. The level of attention to detail and consideration they had towards both their families and beliefs was truly touching.

Prior to the main ceremonies, for her Mehendi party, Priyanka wore a wonderful and colourful lehenga. 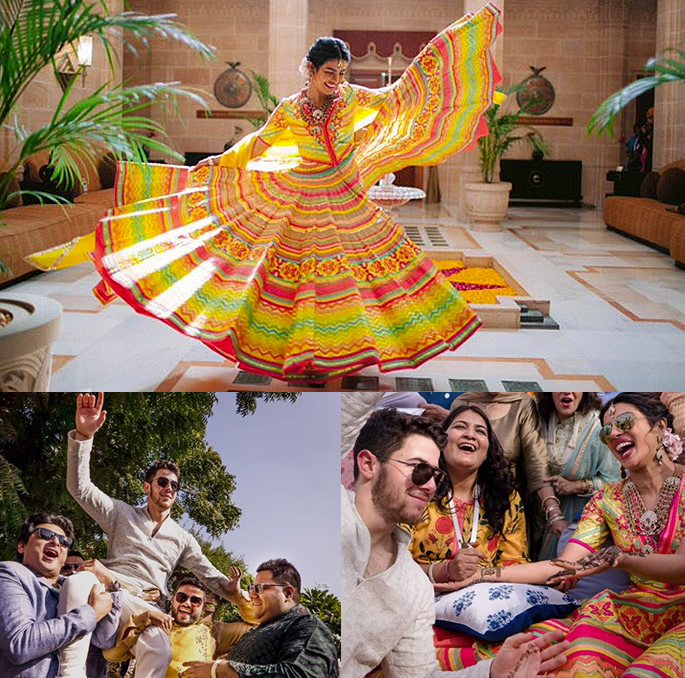 Nick donned a lovely relaxed beige cotton kurta pyjama which contrasted wonderfully with his bride to be.

For the Sangeet party in the evening which was a very upbeat, musical and even sporting affair with a cricket match between the two sides, the couple once again wore very fitting outfits for their very special occasion. 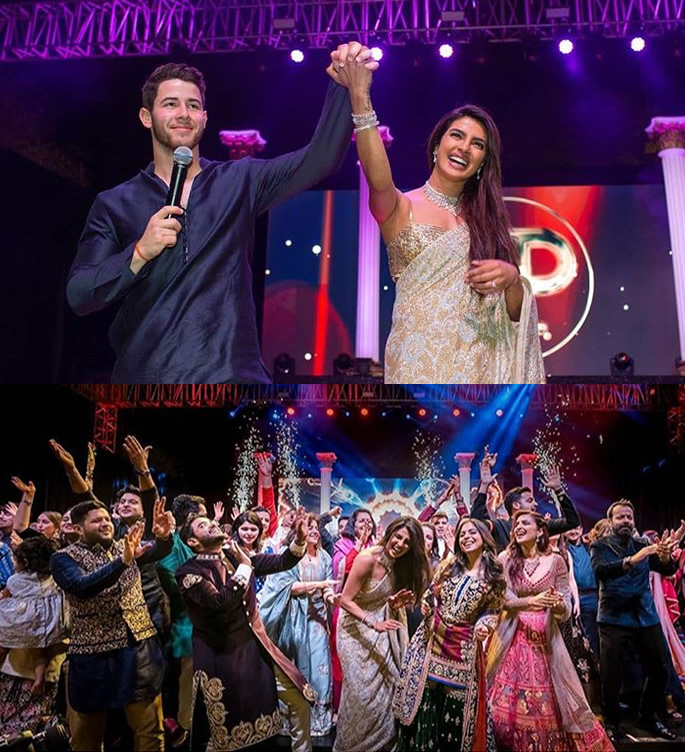 Without a doubt, this wedding brought together not just two people who are in love but an acceptance of both western and eastern cultures celebrated in style.

DESIblitz wishes this happy couple nothing but the best as they begin their life as husband and wife, and a new chapter of their lives.