Priyanka Chopra and husband Nick Jonas took to Delhi to celebrate their wedding with Indian dignitaries such as India’s Prime Minister in a lavish setting.

Bollywood's favourite 'Desi girl' did not disappoint with this look.

The wedding celebrations for Priyanka Chopra and Nick Jonas continued this time in Delhi, India.

The Jonas-Chopra clan have showcased some stunning looks over these wedding events, with this event being a stand out case.

While the Jodhpur wedding was very bright and traditional, this Delhi reception is more elegant and refined.

The decor was heavy on intricate floral patterns, lots of pink and the couple’s initials ‘NP’ were visible in much of the adornment. 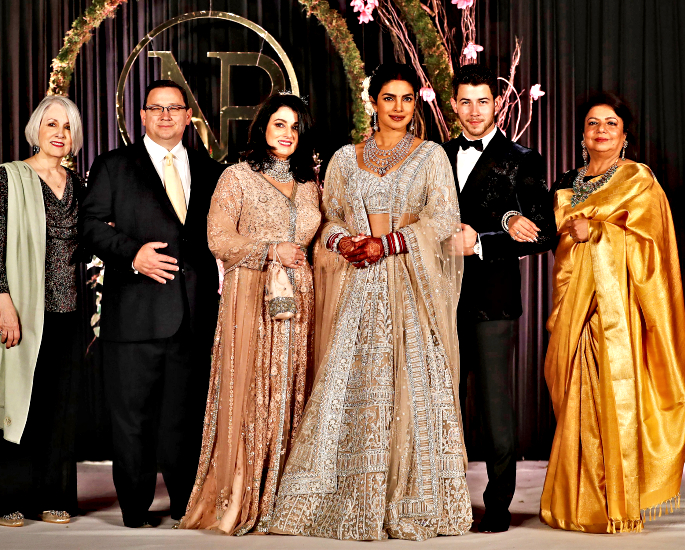 Mothers of the bride and groom both were seen in traditional Indian ethnic wear.

Priyanka’s mother was seen in a regal Banarasi yellow saree, with a very elegant up-do for her hairstyle.

Whereas Jonas’ mother opted for a pastel pink and heavily embroidered ensemble.

The Jonas-Chopra clan were all smiles as they posed for photos before entering the Delhi reception. 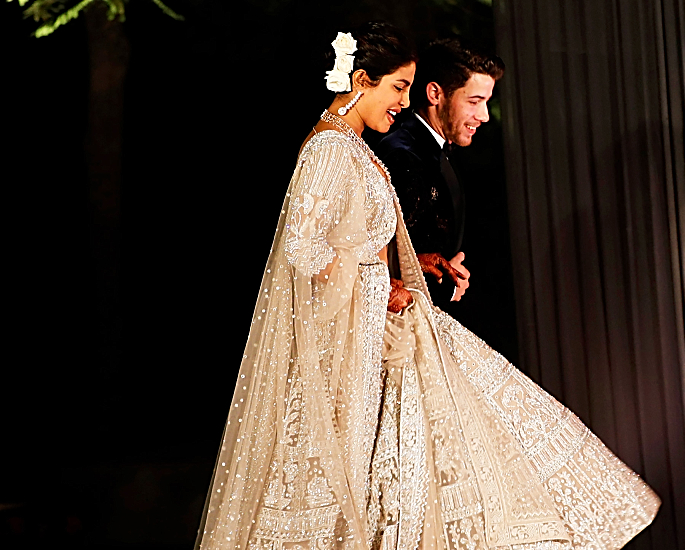 Chopra’s Desi attire options have all been very traditional laden with intricate embroidery and designs.

This lehenga included very thick but beautiful embroidery with Desi prints visible in its design.

Bollywood’s favourite ‘Desi girl’ did not disappoint with this look. 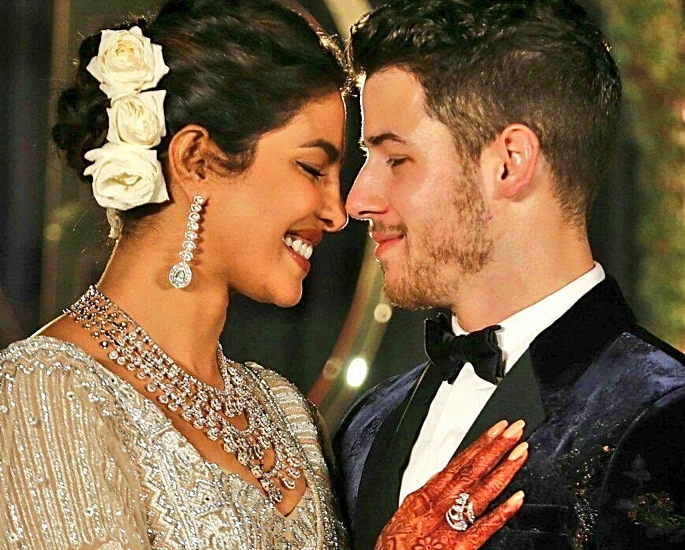 Chopra’s jewellery was particularly dazzling, her diamond teardrop earrings were paired with a beautiful diamond haar and a matching ring.

The white roses in her hair created a very graceful touch to this exceptionally elaborate look.

Jonas opted for a luxurious blue velvet suit jacket, the detailing on the jacket has a Desi touch to it which tied his look with Priyanka’s very well. 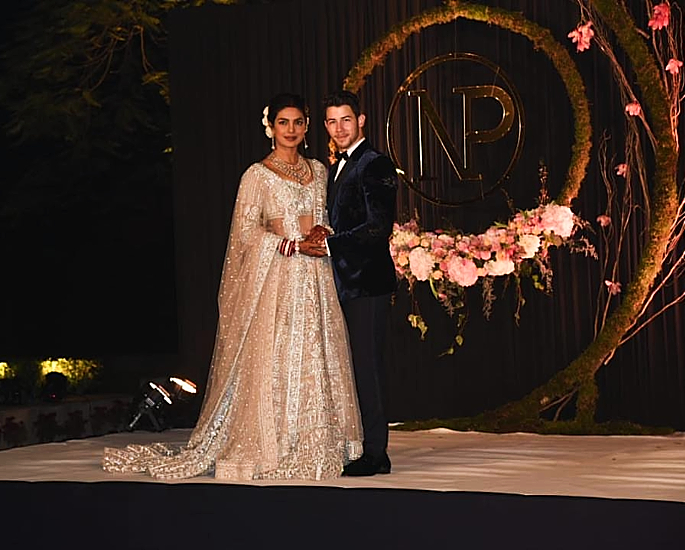 The outdoor area had an ornate floral arrangement on the stage.

The arrangement seemed to be inspired by forest wildlife, with branches craning over to reveal a metallic sign with the couple’s initials ‘NP’ inside. 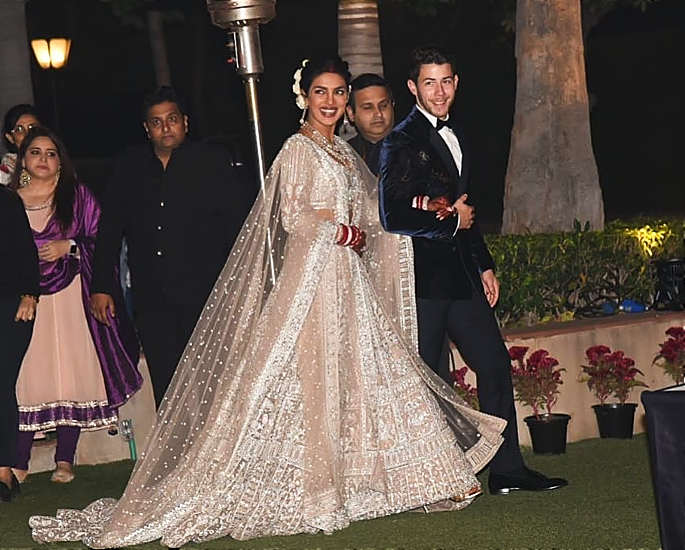 Priyanka is seen to still be sporting her ‘choora’, the ‘choora’ being a traditional set of Indian bridal bangles usually of red colour.

Some consider it good luck to wear these bangles after the wedding, the longer the better. 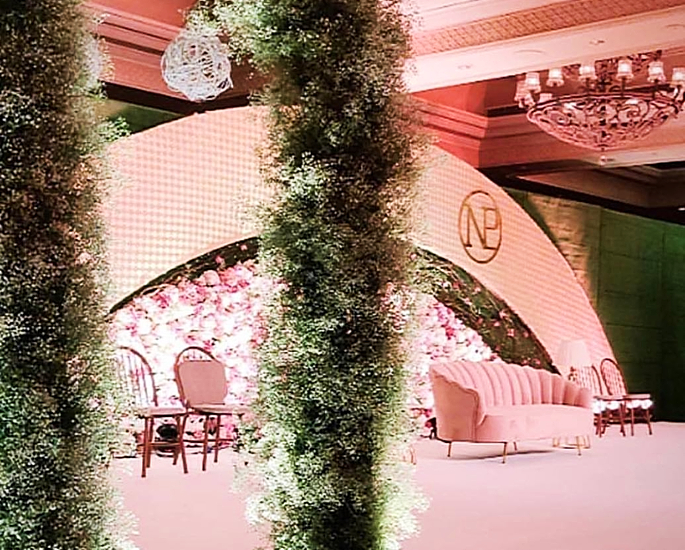 The venue was full of lavish floral arrangements with whispy towers of babies breath and feature floral walls.

The stage and it’s furnishings were all picking up on a very mod feeling pink aesthetic. 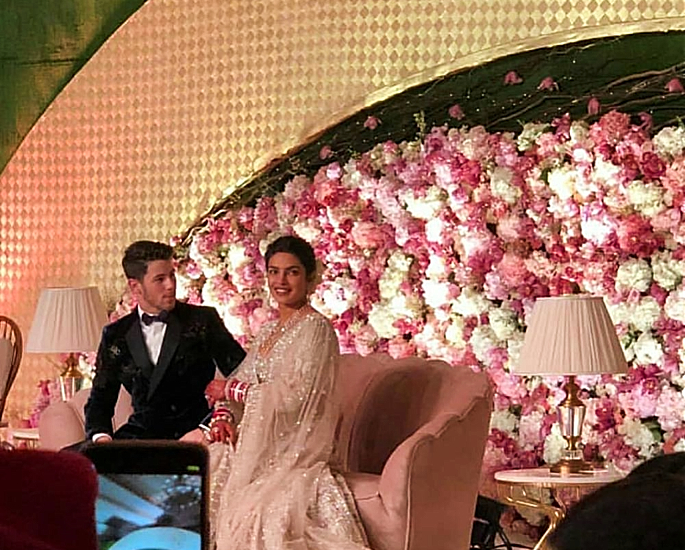 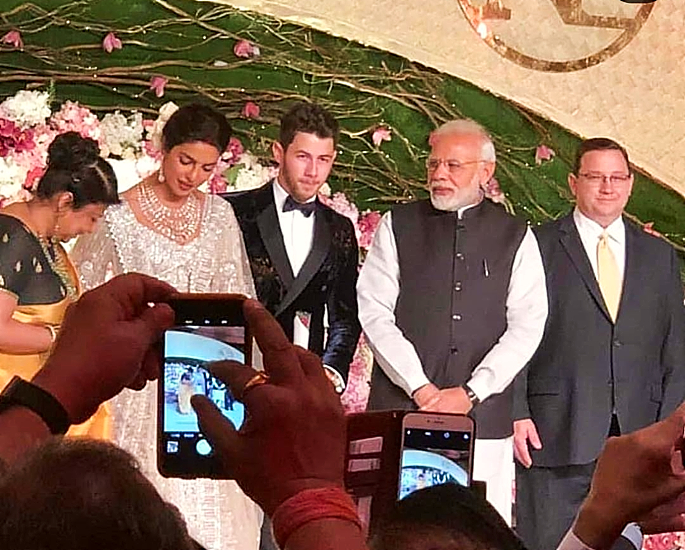 Indian dignitaries such as Prime Minister Narendra Modi were in attendance.

Modi was seen to speak with the Jonas’, laughing and congratulating the happy couple on their recent nuptials. 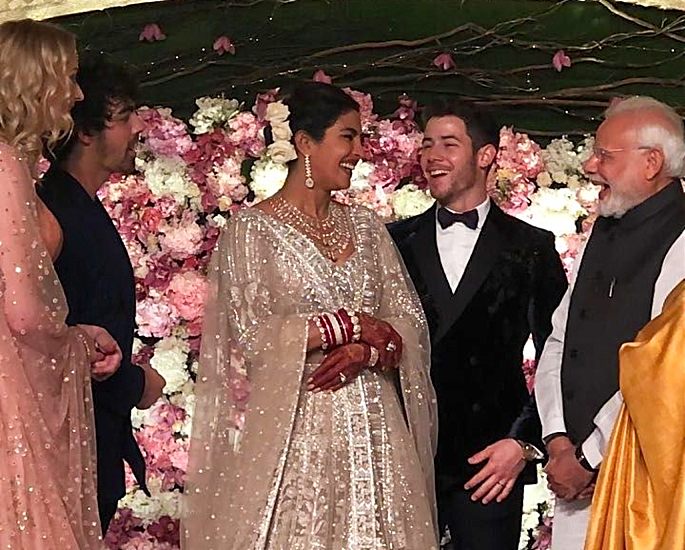 A video on Twitter caught the positive mood of this reception as both the bride and groom’s family posed for pictures with the Prime Minister of India.

PM @narendramodi arrives to give his blessings to @priyankachopra and @nickjonas at their reception in Delhi. #NickYankaReception pic.twitter.com/ta9re2zuFD

This formal Delhi reception was held in order to cater to additional guests who were unable to attend the more intimate Jodhpur wedding activities.

There are suggestions that Priyanka will be holding a Mumbai based event for all her Bollywood colleagues, it will be interesting to see how both Jonas and Chopra dress for that occasion.