Deepika and Ranveer celebrated their wedding with Bollywood superstars. The Bachchans added their groove to the night with other stars like Shahrukh Khan.

"The key to success in life is to say yes to everything she says."

With Deepika Padukone and Ranveer Singh celebrating their marriage with Bollywood’s elites, including the Bachchans.

The congregation of party-goers consisted largely of actors, models and other celebrities.

Deepika and Ranveer have unveiled many different avatars throughout their wedding functions and this reception did not disappoint.

While Deepika looked bold and beautiful in her red gown crafted by international designer Zuhair Murad. 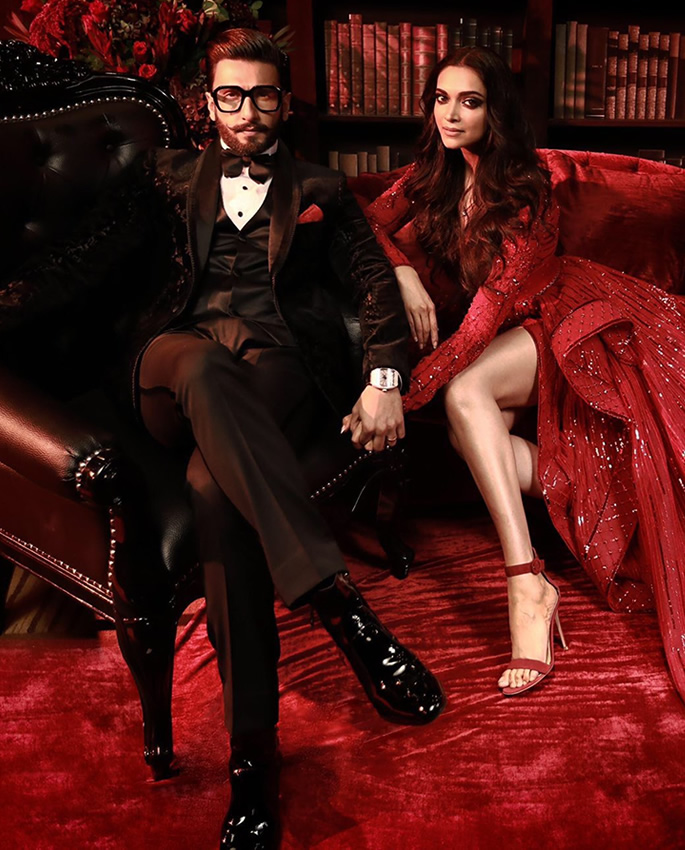 Photos, videos and details from this exclusive wedding reception were released on social media for the world to see, which highlight some iconic Bollywood dance moments.

This couple has put on some seriously great parties throughout their wedding festivities but this most recent celebration tops them all.

Deepika was seen to swap her heels out for trainers, as she and husband Ranveer Singh partied the night away with the celebrity guests.

This opulent event was hosted in the heart of Mumbai at the Grand Hyatt hotel.

The couple invited many Bollywood actors, colleagues, friends and other celebrities to dance the night away.

The Bachchans came in full form with Aishwarya, Shweta, Jaya and Amitabh all seen in attendance.

Aishwarya greeted Deepika with full laughter and joy during their encounter. 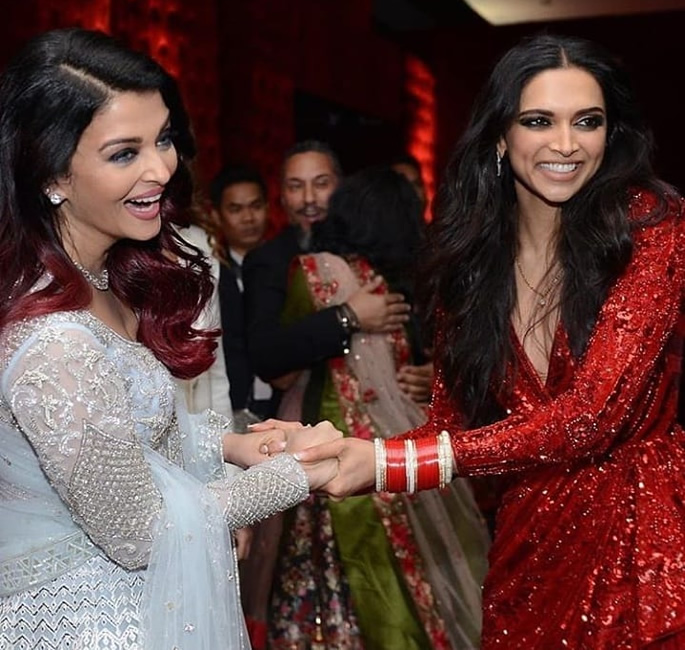 Ranveer was met by Amitabh Bachchan with a very warm and fun-loving hug which elated the young actor. 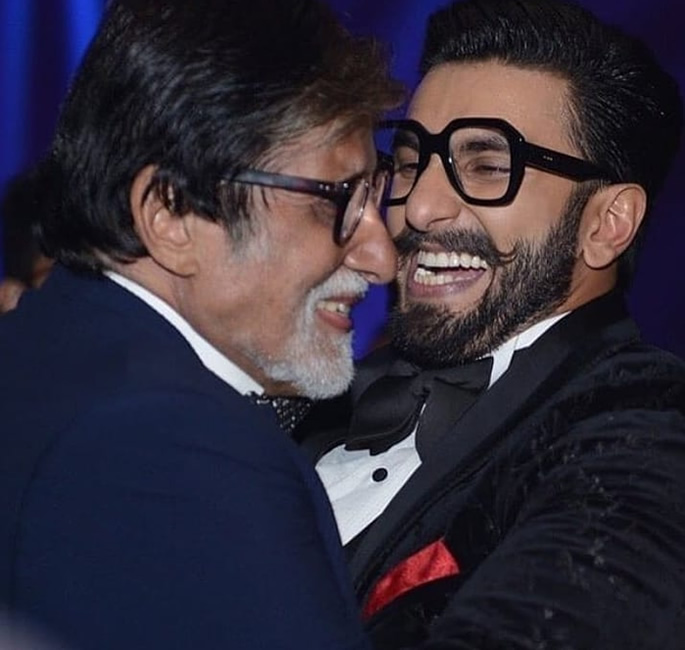 Deepika was very pleased to see Jaya at her reception and gave her a very welcoming hug and kiss on the cheeks. 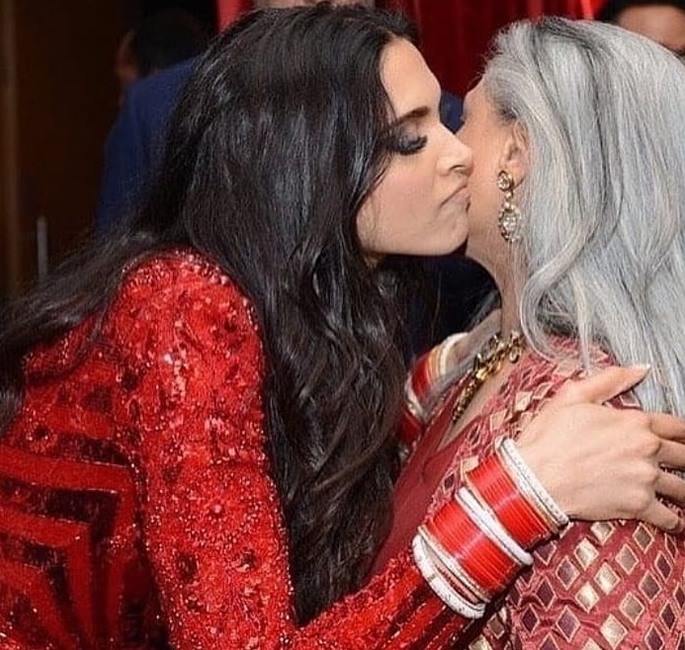 The mood seemed jovial and electric in this ballroom.

Many videos and pictures have emerged of these Bollywood stars dancing the night away with the happy couple, most prominently so were the Bachchan clan. 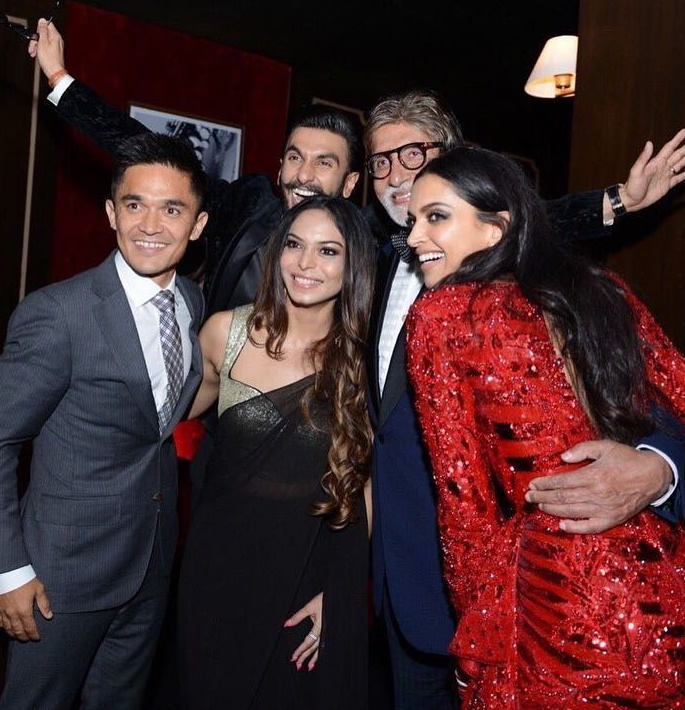 Shweta was seen dancing and hugging Bhabi Aishwarya on the dance floor while everyone joined in the groove of the music. 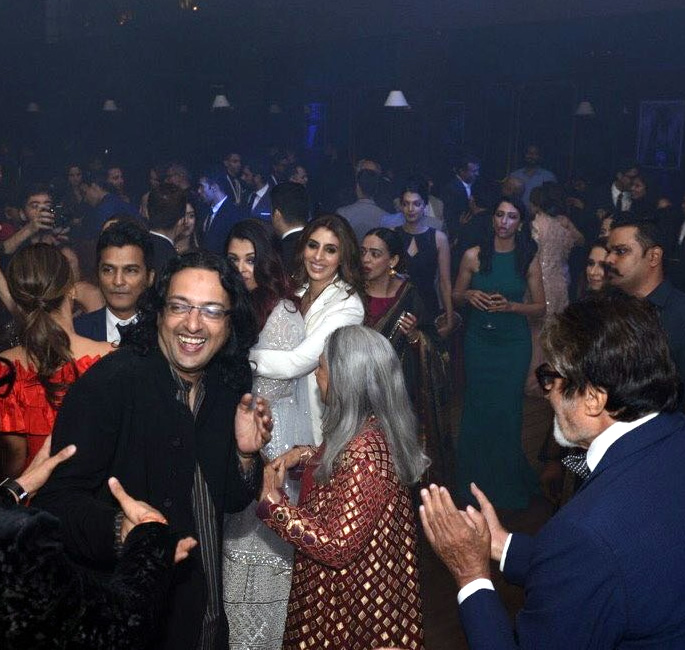 Senior Bachchan was seen to shake it to the iconic song, ‘Jumma Chumma De De’ with Ranveer shown in an Instagram post by Filmfare. The crowd roared in response to this dynamic duo.

An even more stunning and iconic moment was when Ranveer jumped from the stage to the floor with full enthusiasm, as he danced with Shahrukh and Malika Arora to ‘Chaiyya Chaiyya’.

Ranveer has been known as a full Bollywood kid, having grown up adoring the likes of Govinda, Amitabh Bachchan and Shahrukh Khan as he grew into adulthood.

So having these special sequences with Shahrukh and Amitabh must have been very special to the actor, as highlighted by his excitement while dancing.

Ranveer adopted an animal print coat over his clothes giving a very ‘Khalnayak’ vibe to his look. 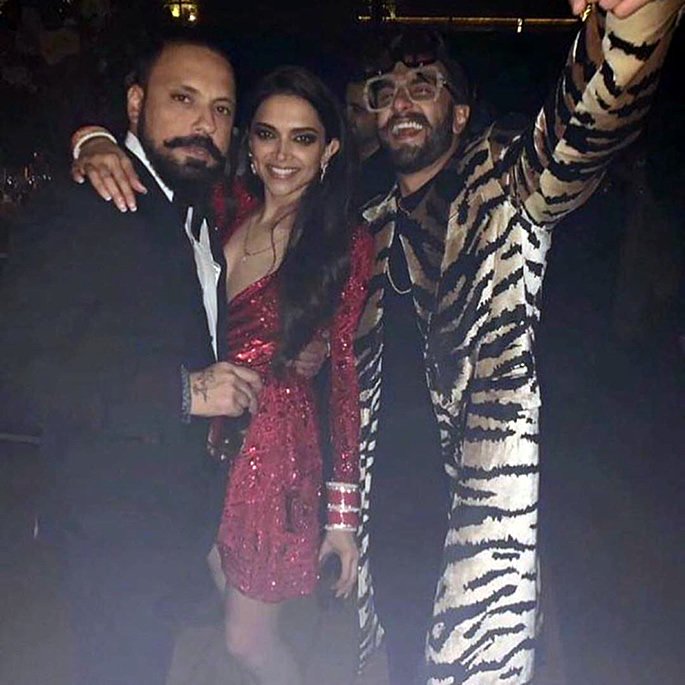 Singh has been known for his adventurous sense of style and he stayed true to form as he partied this night away with his fellow Bollywood actors.

Whereas Deepika ditched her train and threw on trainers to become the ultimate ‘Bridechilla’.

Deepika highlighted the need for comfort and ease as she too planned to dance well into the early hours of the morning. 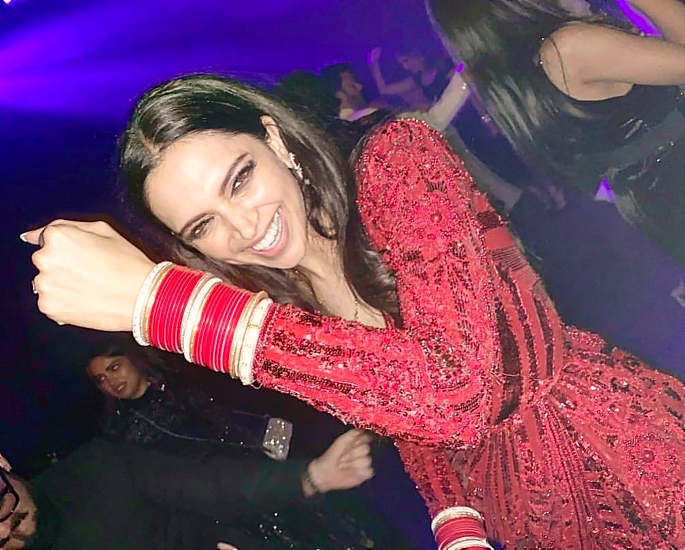 Ranveer even took control of the mic at one point in the night, showcasing his impressive rap skills to all in attendance.

Ranveer also shared a sweet moment dancing with his mother, to the song ‘Gallan Goodiyaan’ from his film, Dil Dhadakne Do (2015).

All appeared to be fully immersed in the music and atmosphere of this amazing night.

With such a lively crowd it was clear to see that Deepika and Ranveer had thrown a very successful party for their fellow Bollywood stars. 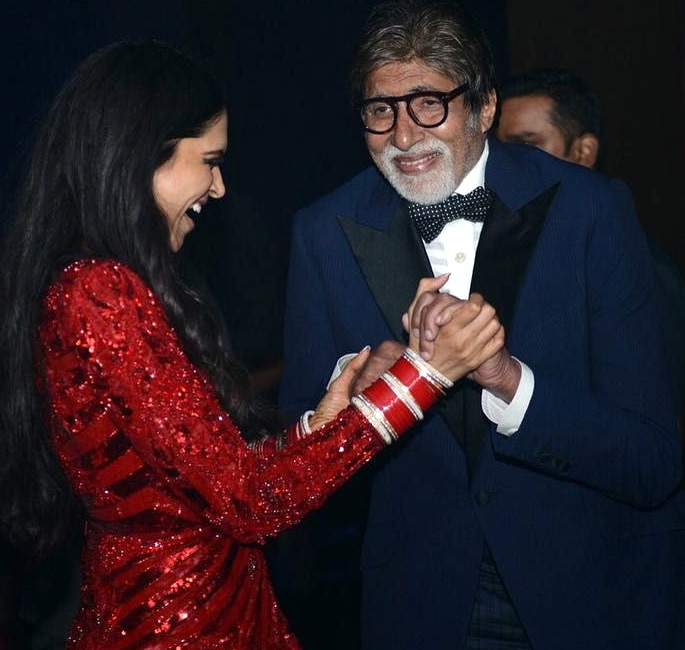 In addition, the bride enjoyed herself out on the dance floor with many of her other celebrity guests.

Deepika has never opted to feed into the ‘coy Indian bride’ stereotype.

Throughout her wedding, she has been carefree and happy as should be the case when marrying someone you love. 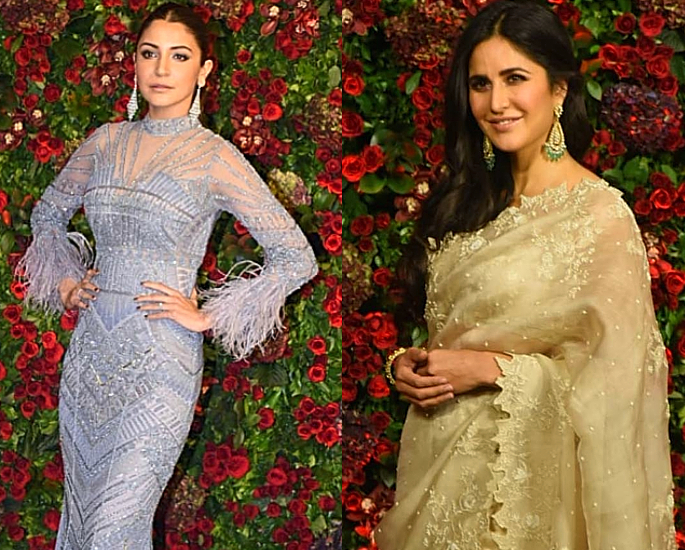 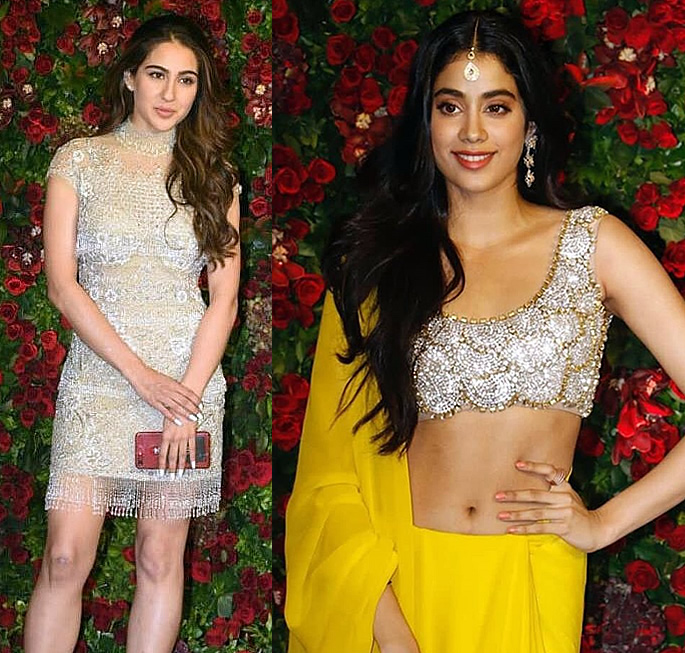 Sara opted for a short and striking bodycon dress, whereas Janhvi kept it traditional in a bright yellow desi outfit. 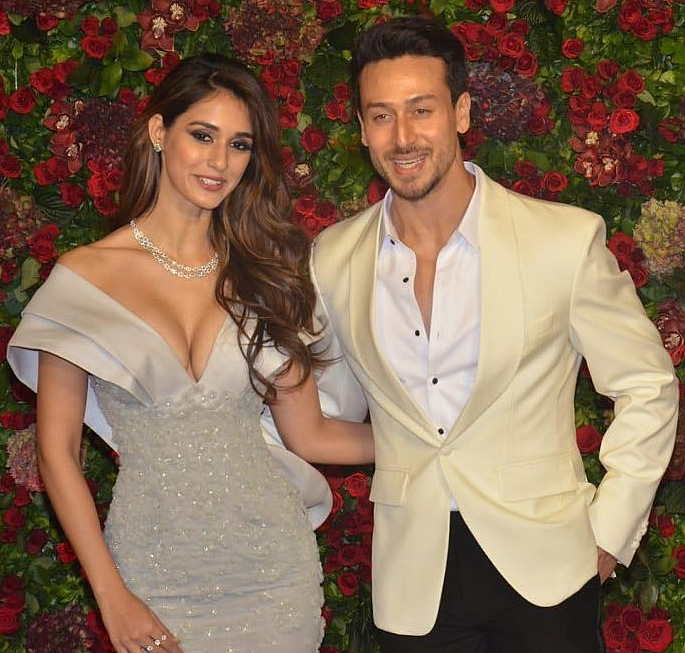 Shilpa Shetty was present with her husband, Anil Kapoor, Karan Johar, Farah Khan, Lara Dutta, Sanjay Dutt, Rani Mukerji, and Juhi Chawla all came to give their well-wishes to the couple.

A true highlight of the night came in the form of a small speech Ranveer Singh shared with the party.

Apparently, his bride was not enjoying the music playing and so Ranveer shared a small word of advice to those attending.

“The key to success in life is to say yes to everything she says.”

“So when baby says; ‘Baby change the vibe of the music!’ I have to oblige. Baby this one is for you.”

This sweet and endearing moment was captured on video by a guest, as seen below.

It was clear to see that Ranveer was largely in control of the music for the night, with most enjoying his choices.

This couple has provided a lot of fashion inspiration for young Desis when it comes to wedding season.

However, they have also highlighted a key lesson here for relationships as communication and understanding is very important.

Deepika and Ranveer have stunned the world with their love, fashion and revelry.

DESIblitz wishes them all the best in the future for their newly-wedded life together.

British Asians Behind the Camera – Why We Need More
Priyanka Chopra & Nick Jonas are Officially Married!