Sara Ali Khan impressed on Koffee with Karan 6 with her confidence. Fans took to Twitter to praise her, with many predicting a bright future for her.

"Do you really want to break the Internet?"

Rising star Sara Ali Khan, daughter of Saif Ali Khan and his ex-wife Amrita Singh, made her long-awaited debut on talk show Koffee with Karan 6, and she did not disappoint.

She appeared alongside her father on Karan Johar’s show in matching monochrome outfits, cracking up a storm on the show with their conversations and revelations.

Their appearance on Koffee with Karan 6 has been highly anticipated ever since they were announced along with a whole host of other Bollywood stars for the latest series.

Once the two took their seats, Sara was asked if she was nervous.

This was her first formal introduction to the entertainment industry, before the release of her films Simmba (2018) and Kedarnath (2018).

Sara told Karan she was excited and nervous. However, it certainly did not come across in her confident manner.

Fans of the popular talk show also took notice, with many going to Twitter to praise the actress-in-waiting for her style and confidence she showed throughout the show.

Karan then questioned Sara: “Do you really want to break the Internet?” She replied: “Why Not?”

It is clear that she achieved that with Twitter users showing their love for Sara’s debut on Koffee with Karan 6.

One user compared her to a volcano ready to erupt in popularity as Alia Bhatt did. Kevin Patel wrote:

#SaraAliKhan New Volcano To Bollywood.. She is Just Going to Erupt Like @aliaa08.
She Showed a Great Sense Of humor But She was also Watching #KWK From Beginning.
Setting Up The Best Example Of MovingOnWithLife!!! LOved it.
So Influencing.????@karanjohar #KoffeeWithKaran https://t.co/Ie5gQUPNkb

“10 years from now Sara Ali Khan is going to be the number one female star. So confident, so charming, so vocal, so honest.

“One episode of Koffee with Karan, and quite sure that she has already won several hearts!”

10 Years From Now – #SaraAliKhan is going to be the number one female star. So Confident, So Charming, So Vocal, So Honest… One Episode of #KoffeeWithKaran, and quite sure that she has already won several hearts!

The Internet and Koffee with Karan viewers have predicted Sara to have a very bright future.

A further Twitter user also said that she is “the kind of nepotism we deserve.”

Throughout the episode, Sara was candid with her answers and spoke with a lot of confidence which made it all the more entertaining. 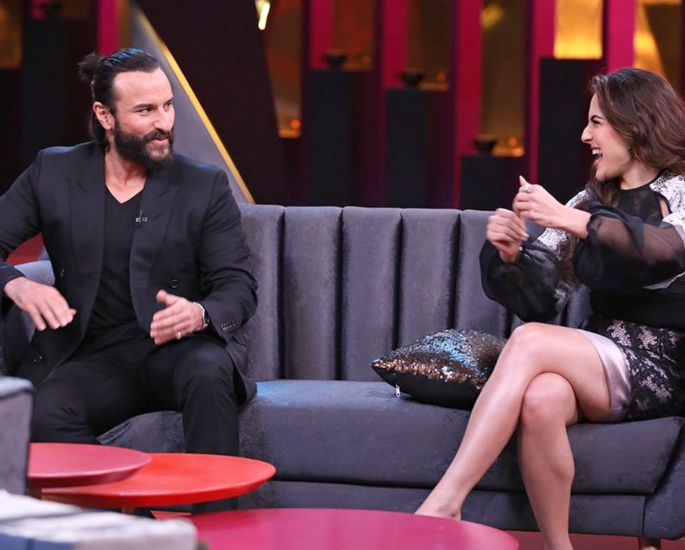 Sara and her father discussed their unconventional bond with each other as a result of their smaller age gap. Saif had married Amrita in 1991 at the age of 21 and they welcomed Sara in 1993.

In one segment, Johar described the upcoming actress as a “mix of both her parents” with the “solitude of Saif” and the crazy humour of Amrita Singh”.

“Saif Ali Khan and Amrita Singh have a kid. That kid is me, of course I’m weird. They’re both weird, we’re all weird.”

The down to earth of the young actress answers had Karan and the viewers in hysterics, making her all the more loved.

Sara and her father then talked about how Saif has now entered a new phase in his acting work.

Since the success of Sacred Games, he says that he considers himself a better actor and working on the show was a great learning experience for him.

Simmba releases three days after Chrismas Day on December 28, 2018. In Simmba, Sara has been cast opposite Ranveer Singh.

While it is unknown how she does in her acting roles, fans can be positive especially after she impressed on Koffee with Karan 6.

Both father and daughter enjoyed themselves on the famous sofa and the viewers enjoyed watching it.

Dhiren is a journalism graduate with a passion for gaming, watching films and sports. He also enjoys cooking from time to time. His motto is to “Live life one day at a time.”
Sarwat Gilani says Pakistani Needs Women-Centric Cinema
Ranveer Singh & Deepika Padukone: A Love Story Timeline