“This will be the first time that the audience will get a peek into what Sara is like."

Day one shooting for Koffee with Karan season 6 began with the Nawab himself Saif Ali Khan appearing with his daughter Sara Ali Khan.

It seems Sara and Saif were the first celebrities to sit on the famous couch for the new season, answering questions by energetic host and film director Karan Johar.

The news was revealed by Karan on his Instagram. He posted a picture of the father-daughter dressed primarily in black and sitting on a greyish couch together.

He captioned the picture with “Today was day 1 for the shoot of #koffeewithkaran! Shot with the extremely hilarious and supremely bright and sensitive father-daughter duo! #saifalikhan and @saraalikhan95.”

Sara who will be making her film debut in Rohit Shetty’s Simmba (2018) later this year also put up the same image via Instagram.

She wrote: “Thank you for my first cup of koffeeee @karanjohar.”

The pair are expected to talk about Sara’s debut in Bollywood, Saif’s hugely successful Netflix series Sacred Games (2018) and the bond that is shared between the two of them. 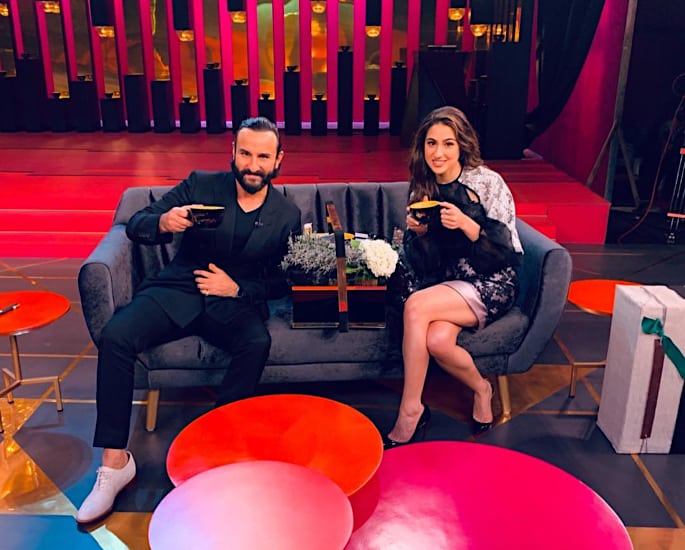 A source mentioned to Mid Day:

“This will be the first time that the audience will get a peek into what Sara is like.

“Karan feels that the episode, complete with witty banter and fun questions, will be a great way to introduce the youngster to viewers,” continued the source.”

Interestingly, Saif’s last appearance alongside Kangana was a big talking point due to her strong opinions on nepotism in Bollywood.

Kangana called Karan the “flagbearer of Nepotism” which sparked a huge debate amongst those within the industry that still exists to this day.

Meanwhile, Karan also shared a picture of the brand new set where Bollywood’s finest will be sipping coffee and sharing their opinions.

The new set is as extravagant as the host himself, boasting a pink and purple theme, with bright lights and a neon sign which says “Stop Making Sense.”

Karan will be launching Sara in Rohit Shetty’s Simmba with Ranveer Singh which will be released on 28 December 2018.

The newcomer was supposed to make her debut in Abhishek Kapoor’s Kedarnath with Sushant Singh Rajput. But due to legal troubles, the film has been pushed back to 2019.

Saif will next be seen in Baazaar (2018) alongside debutant Rohan Mehra, Radhika Apte and Chitrangda Singh. The film will be releasing on 26 October 2018.

The sixth edition of Koffee with Karan is hotting up as a few days ago Deepika Padukone and Alia Bhatt had been confirmed as the first guest pair on episode 1 of the show.

Numerous stars have been linked to appear on Koffee with Karan for the first time including Jahnvi Kapoor, Sunny Leone and Ishaan Khatter.

Ishaan starred opposite Jahnvi in the film Dhadak (2018), which had the highest opening day figures for newcomers on a domestic level.

Other names rumoured to come on the show include Virat Kohli, Anushka Sharma and many more.

Koffee with Karan season 6 premieres on 21 October 2018 and will broadcast worldwide on channels part of the Star Network.