Sonam and Anand party with Bollywood Stars at their Mehendi Party

Sonam and Anand celebrated their Mehendi and Sangeet with their best friends from the world of Bollywood. Sonam dazzled at the pre-wedding function in a gold and ivory lehenga.

the Kapoor clan really know how to throw a party

Shades of white formed the dress code for Sonam and Anand’s Mehendi and Sangeet function on Monday 7th May 2018.

Her husband-to-be, Anand Ahuja also looked the part in AJSK Man with a matching a white and ivory kurta.

It featured a band ghala jacket with gold detailing around the collar. 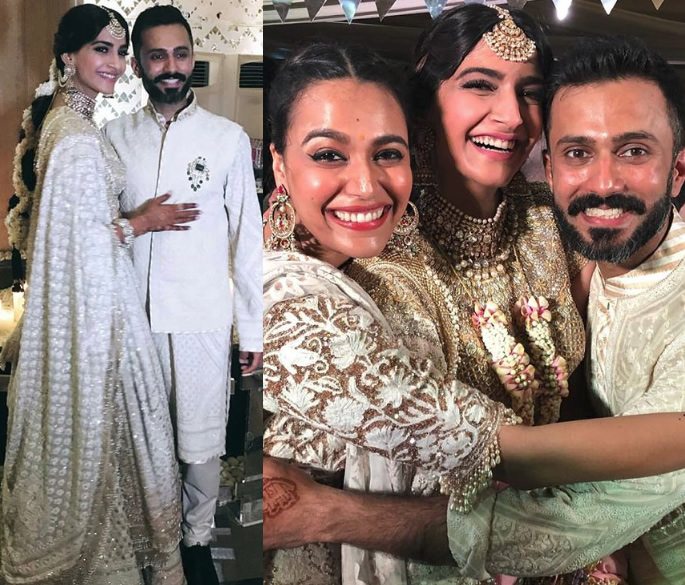 Sonam’s gorgeous dress reportedly took eighteen months to complete and is stunning in its intricate detail.

And while other brides might opt for more colourful outfits for their mehndi party, the light hue exuded classic elegance. 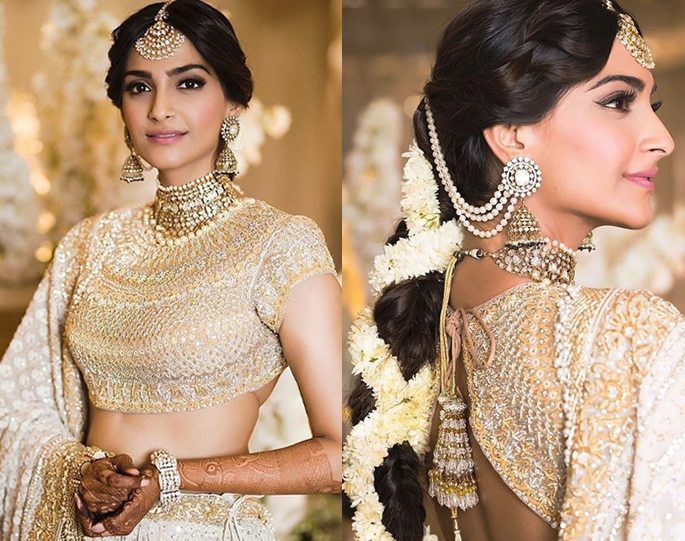 Of course, we’ve come to expect no less from Sonam, who harbours a great passion for fashion and style alongside her sister Rhea Kapoor. 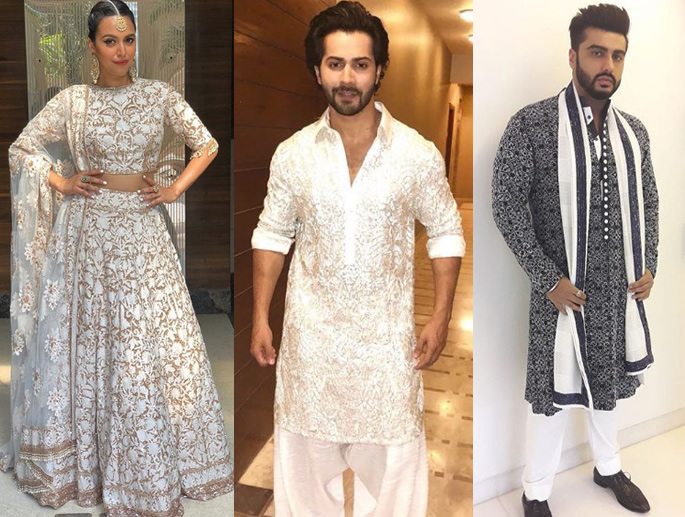 Designer Manish Malhotra proved to be a popular choice, with the likes of Karan Johar, Varun Dhawan and Arjun Kapoor opting for dapper kurta pyjamas.

In addition, Swara Bhaskar stunned in a white and gold thread lehenga also by Manish Malhotra.

But perhaps the best dressed celebs of the night were Katrina Kaif and Janhvi Kapoor who stunned in the respective white ensembles. 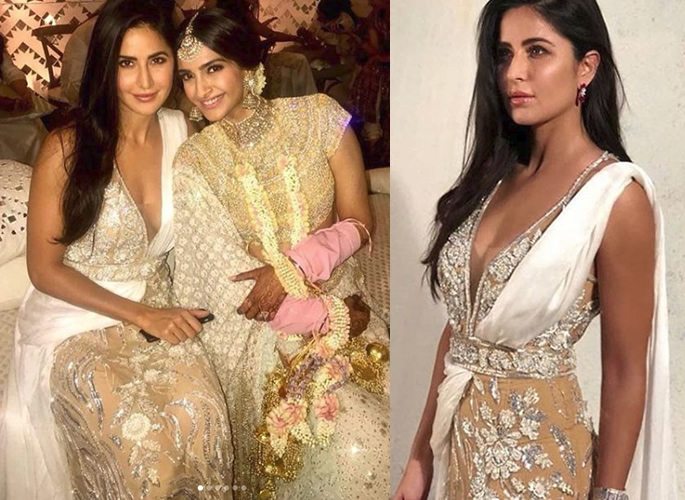 Katrina opted for a nude coloured ethnic gown with beautiful white embroidery and white dupatta stitched into the waist of the dress.

Also turning heads was Sonam’s cousin and the daughter of the late Sridevi, Janhvi.

The young starlet who is ready to make her big Bollywood debut wore a breathtaking lace lehenga with net pallu.

Joined by her sister Khushi who wore a similar ensemble, Janhvi kept her luscious locks in open waves. 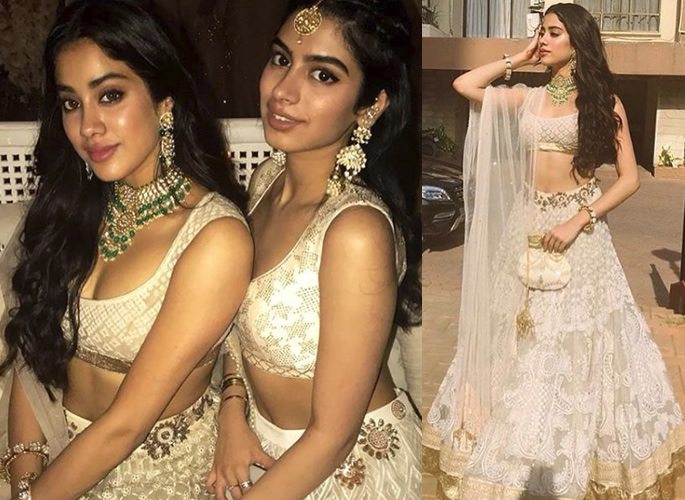 Janhvi also happened to be part of the “Chooda Ceremony” where Sonam was presented with wedding bangles by her aunts and elders.

A short video was posted on Instagram by Shilpa Shetty, showing Sonam smiling into the camera during the Punjabi ritual.

Chooda ceremony.. Congratulations @sonamkapoor ,wishing you all the happiness ,unconditional friendship and love in this matrimony with @anandahuja ..you will make such a beautiful bride tomw ..Can’t wait ?Soooo happy for you and @kapoor.sunita and @anilskapoor , so beautifully put together ??#chooda #mehendi #bride #instagood #shaadimagic

Part of the tradition is to also tie kaleerein onto the bangles. In another video on Instagram, we can see Sonam attempt to drop the kaleerein over Janhvi’s head to see whether she is the next to be married.

When the kaleerein don’t drop, we can see Janhvi sigh in relief! Even Sonam’s BFF Jacqueline has a go, but again Sonam’s kaleerein stay firmly fixed.

Aside from the pre-wedding rituals, the Kapoor clan threw an incredible party. With Badshah present, many of the stars including Varun and Arjun joined him in the DJ booth to sing along to some Bollywood dance classics.

Sonam even got onto the dance floor with Anand to groove to her latest track, ‘Tareefan’, from her upcoming film, Veere Di Wedding.

One of the most precious moments of the evening was when an infectiously happy Anil Kapoor and his brother Sanjay spent the majority of the time on the dance floor.

Anil danced with Karan and was even performed a fun number with Shilpa.

Other guests included the likes of Farah Khan and her three kids, Karishma Kapoor and her daughter, Rekha, Rani Mukerji and Katrina’s sister Isabelle.

From all the video clips and images that are making the rounds on social media, it’s very evident that the Kapoor clan really know how to throw a party.

Sonam and Anand’s wedding ceremony will take place on the morning of Tuesday 8th May 2018, followed by a big wedding reception in the evening.

Aisha is an editor and a creative writer. Her passions include music, theatre, art and reading. Her motto is “Life is too short, so eat dessert first!”
Is Pakistani Actress Saba Qamar on her way to Hollywood?
Sonam Kapoor and Anand Ahuja Wedding – See Pictures!