Speculation and the buzz around is that another big fat Bollywood wedding is soon on the cards! This time it is the delightful marriage of Sonam Kapoor and Anand Ahuja.

"The Kapoor family is working overtime to finalise the details"

The season of love seems to have arrived yet again in Bollywood with the possibility of another grand Bollywood wedding. This time, it’s very strong speculation of the union between Sonam Kapoor and Anand Ahuja.

If media reports are to be believed, this girlfriend and boyfriend ‘jodi’ of Bollywood that has never shared screen space together, as one is an actor and the other one isn’t, is ready to spend an entire lifetime in each other’s company.

Buzz has it that Bollywood star, Sonam Kapoor, daughter of veteran Bollywood actor and producer, Anil Kapoor, is getting married to the Delhi-based businessman named, Anand Ahuja.

It is destined to be a big fat Punjabi wedding that will probably be held next month in Mumbai.

Incidentally, the famous B-town female fashion icon’s upcoming movie is called Veere Di Wedding, which has wedding written all over it!

Cinemagoers who love Bollywood and admire Sonam Kapoor, are excited to know that ‘Sonam Di Wedding’ may well be taking place actually before the release of Veere Di Wedding, which is to hit theatres in June 2018.

According to an article published in Mumbai Mirror, the Kapoor girl and her fashion and lifestyle entrepreneur husband-to-be will wed during ceremonies that are scheduled to take place between May 7th and 10th in India’s city of dreams, Mumbai.

More details about the exact date of the nuptials and venue are still awaited. Another possible date of the wedding could be much in advance on April 29th according to other media reports.

The Mumbai Mirror article further states, how at first it was decided that the sweethearts would have a destination wedding in Switzerland but the location was changed to India due to logistical reasons. 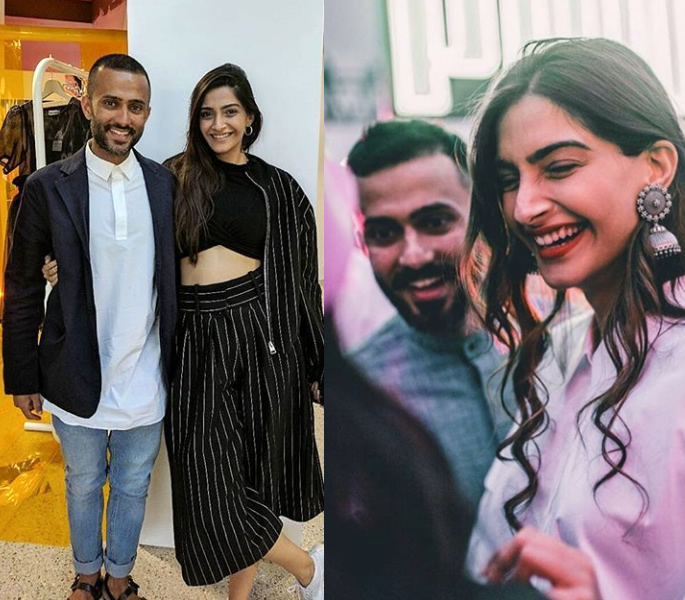 Giving more details on this sudden change in plans, a quoted source says:

“It was becoming too cumbersome to manage the travel and living arrangements for approximately 150 members of the extended family and close friends of the Kapoors as well as Anands.”

“It would have been difficult for the senior members of the extended family, who are expected to attend all the ceremonies, to fly to Switzerland.”

Hence, a change in the wedding location.

It is heart-warming to see how the Kapoors have bravely dealt with the sorrow of losing one of their beloved family members recently and are trying their best to carry forward with normal life.

Despite being shaken from the inside the entire Kapoor clan seems to be united in making sure that Sonam’s wedding will be a grand and spectacular affair.

“The Kapoor family is working overtime to finalise the details at the last minute after several changes in the dates.”

“Since SoBo (South Mumbai) would be too far for the families as well as the guests from Delhi, Sonam and her mother, Sunita, want to finalise a suburban hotel, preferably in Bandra or Juhu.”
Citing areas in Mumbai where the Kapoor family lives.

Bollywood stars Kareena Kapoor Khan, Swara Bhaskar and Shikha Talsania are on the confirmed guest list of the wedding.

More popular names from politics, media and Bollywood are thought to receive invites after the finalisation of the venue.

Sonam and Anand are rumoured to have been dating for a few years now. Pictures of the two having a great time with one another can be seen on their respective Instagram accounts very often.

But, what really caused fans and the media to go into a frenzy was when, Anand Ahuja accompanied Sonam Kapoor and Anil Kapoor to the 64th National Film Awards in New Delhi last year where the 32-year-old actor, received the Special Mention Award for her performance in the critically acclaimed film and box office hit Neerja.

So, here’s to the wedding bells of Sonam and Anand, sometime soon.

Mariya is a cheerful person. She is very passionate about fashion and writing. She also enjoys listening to music and dancing. Her motto in life is, "Spread happiness."
10 Bollywood Actresses Who Faced Casting Couch Experiences
Boogie Man: A Coming-of-Age Story with Disco and Bollywood