New Prime Minister Rishi Sunak remains in the headlines and now, a throwback picture of him with Sonam Kapoor and Anand Ahuja has gone viral.

“This picture just keeps on surprising.”

Rishi Sunak is the first British-Indian Prime Minister and now, a picture with Sonam Kapoor and her Anand Ahuja has gone viral.

He shared a throwback picture of Mr Sunak unexpectedly alongside a whole host of Indian celebrities.

The now-PM is seen at the back wearing a black suit. Meanwhile, Sonam and Anand are standing on opposite sides of the group photo.

Sonam wore a green outfit while Anand opted for a smart-casual look, wearing a blazer, t-shirt and trainers.

In the caption, Ayaan wrote: “Many many congratulations Prime Minister Rishi Sunak.” 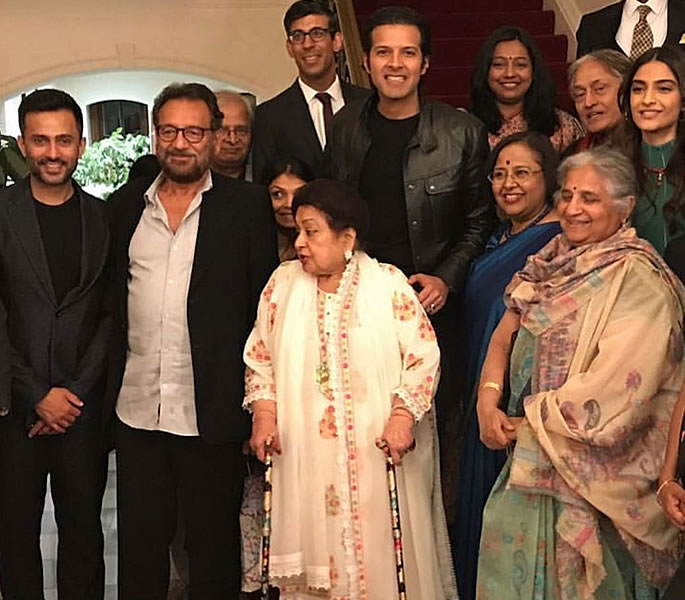 The surprising picture went viral and people took to the comments section.

One said: “Lovely pic, so much talent, so many old friends.”

Another person, who did not expect to see Rishi Sunak alongside the likes of Bollywood stars, wrote:

“This picture just keeps on surprising.”

Amitabh Bachchan wrote: “Jai Bharat… now the UK finally has a new viceroy as its Prime Minister from the Mother country.”

Raveena Tandon reacted to the news on Twitter. In response to a tweet by ANI, she wrote:

“Diwali seems to be special this year! ‘India Vs Pak 2022’… Rishi Sunak… so be it good for everyone… may you all achieve what you all set out for. May all your dreams come true.”

“As you become UK PM, I look forward to working closely together on global issues and implementing Roadmap 2030.”

“Special Diwali wishes to the ‘living bridge’ of UK Indians, as we transform our historic ties into a modern partnership.”

“We are proud. We are confident he will do his best for the people of the United Kingdom.”

Sonam Kapoor and Anand Ahuja became parents to a son, who they have named Vayu, on August 20, 2022.

Sonam recently threw a lavish Diwali party, which was attended by many celebrity friends and family.

Dhiren is a journalism graduate with a passion for gaming, watching films and sports. He also enjoys cooking from time to time. His motto is to “Live life one day at a time.”
Charu Asopa & Rajeev Sen split over Abuse Allegations
Feroze Khan breaks silence on Domestic Abuse claims