Sonam Kapoor took to Instagram to reveal the first picture of her baby. She also revealed what she and Anand Ahuja named him.

"we seek blessings for our son, Vayu Kapoor Ahuja."

Sonam Kapoor and Anand Ahuja unveiled the name of their baby boy.

To mark one month since the child was born, the couple announced that they had named their son Vayu Kapoor Ahuja.

They also shared the first picture of Vayu as well as the meaning behind his name.

In the picture, the trio were dressed in yellow traditional outfits.

“In the spirit of all that is sacred, life-giving and eternally ours, we seek blessings for our son, Vayu Kapoor Ahuja.” 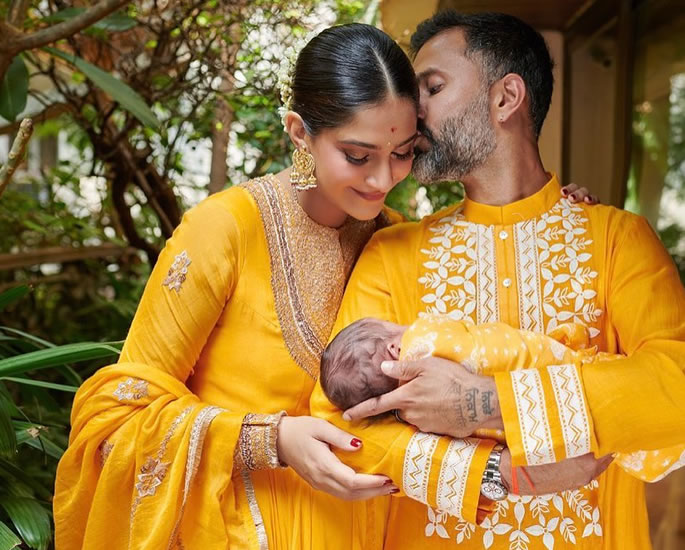 Explaining the meaning behind the name, the couple continued:

“In Hindu scriptures, Vayu is one of the paanch tatvas. He is the deity of breath, the spiritual father of Hanuman, Bheem and Madhav and He is the incredibly powerful lord of wind.

“Praana is Vayu, a guiding force of life and intelligence in the universe. All the deities of Praana, Indra, Shiva and Kali relate to Vayu.

“He can breathe life into beings as easily as he can destroy evil. Vayu is said to be heroic, brave and mesmerisingly beautiful.

“Thank you for your continued wishes and blessings for Vayu and his family.”

Sonam Kapoor and Anand Ahuja got married in 2018 and they welcomed their first child together on August 20, 2022.

Their message had read: “On 20.08.2022, we welcomed our beautiful baby boy with bowed heads and hearts.

“Thank you to all of the doctors, nurses, friends and family who have supported us on this journey.

The couple have refrained from posting pictures of the newborn but to mark one month since being born, Sonam shared a glimpse of Vayu’s Boss Baby-themed birthday cake.

The personalised cake featured a message that read ‘Boss Baby Kapoor Ahuja’. It also had several cut-outs with number one in blue.

“@cocoatease thank you for my baby’s one month birthday cake.”

On the work front, Sonam Kapoor will next appear in Blind.

The film centres on a blind police officer who is searching for a serial killer.

Although the film was completed in 2021, it remains delayed.

Dhiren is a journalism graduate with a passion for gaming, watching films and sports. He also enjoys cooking from time to time. His motto is to “Live life one day at a time.”
Priyanka Chopra addresses UN General Assembly in New York
Comedian Raju Srivastava passes away at 58