Boogie Man: A Coming-of-Age Story with Disco and Bollywood

Boogie Man is a fun mix of Seventies music and Bollywood emotion at 2018’s UK Asian Film Festival. This feel-good comedy sees an endearing young British Asian teenager find himself and his future while discovering love in multicultural London.

Boogie Man is a feature film directed by Andrew Morahan, featuring an exciting cast of new actors like Kush Khanna in the lead role, alongside familiar faces like Roshan Seth, Shobu Kapoor and Amy Jackson.

Loosely based on the experiences of a friend, Morahan wrote the screenplay in collaboration with Simon Olivier to follow the struggles of a British Asian teenager.

Set in multicultural London, Pavan (Kush Khanna), is a directionless young man, grappling with his cultural heritage and his future. His grandfather (Roshan Seth) and mum (Shobu Kapoor) want him to be the family pioneer and attend university.

Yet, unlike his friends, Pavan feels lost. All he knows is that he likes the same disco music as his deceased dad.

It’s at a 70s exhibition that he sees his dream girl. Selfie in tow, he returns to normal life as a teenager while his older crush, the model and actress, Stephanie Crane (Jerry-Jane Pears), is whisked away by her domineering manager.

Boogie Man includes a memorable cast of characters, who are sometimes obstacles in Pavan’s efforts to see Stephanie again.

Still, Pavan may idealise his dad or Stephanie, but it’s these friends and family members who teach him valuable lessons in this coming-of-age story.

Bollywood and Disco in the Heart of London 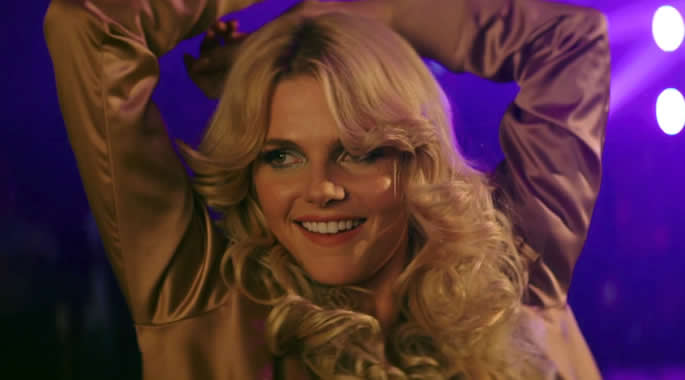 The comedy maintains a balance between including a realistic depiction of Pavan’s life and indulging in the fantastical.

Pavan is a typical teenage boy and in many ways, the film appears like any other light-hearted comedy.

The majority of events occur in Pavan’s two worlds of home and school. But, it’s refreshing to see the film finding laughs in everyday life since British Asians have such limited representation.

One moment, he’s running late to class without showering and sneakily avoiding any university conversations with his family. Then he’s distracting Rama (Karan Gill) during a lecture and teasing him for the obvious attraction between him and another classmate.

Plus, Morahan takes common tropes like the car chase and lets them play out realistically to great comedic effect.

Although, he doesn’t shy away from showing today’s challenges for British Asians. At one point, Pavan is the target of racial abuse.

Of course, this would have been present during the 1970s. However, in Pavan’s version of the era, he can be the romantic hero as much as any non-Asian person.

Pavan uses his disco-fantasy world as escapism and the film fully embraces nostalgia.

The disco scenes see characters resplendent in throwback outfits under swirling, colourful lights. Here, this glamour permits characters to feel a world away from modern London and its pressures.

Similarly, scenes where Pavan enters this other world importantly keeps the tone light for a challenging plot. Arguably, some may find his interest in Stephanie tends to the stalkerish, evoking, for example, the South Asian concept of ‘eve-teasing’.

Instead, Pavan’s quirky imagination in addition to his goofy and sweet personality off-sets this. The audience perceives his affection more as puppy love and share in the nostalgia of young romance.

Although, Morahan importantly prevents these surreal moments from becoming farcical.

Troubles with family and friends slowly teach Pavan to stop daydreaming to avoid pressing questions on university and understand his heritage.

For the film’s position as a coming-of-age story, this balance of genres is highly effective. The use of Pavan’s dreams of the past offers an original interpretation of a familiar central message while entertaining.

An Overflow of Ideas? 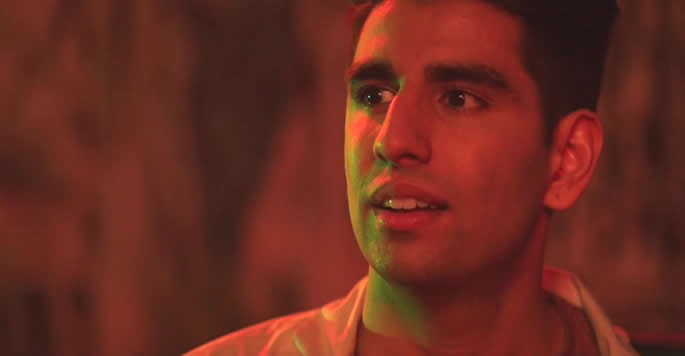 Boogie Man’s settings are good at showing the different aspects of Pavan’s identity. Light, airy shots of their modern school and wide London streets reflect his freedom outside the family home.

Equally effective are the interiors of the home. The design highlights the variety of influences on British Asians today as religious items sit along modern paintings.

Although an overflow of ideas appears in the family home and it then seems a little too put together.

On one hand, Pavan’s room reflects his personality. On the other, the rest of the family’s colourful and eclectic home often feels like a show home.

Only key moments of eating at the dining table made the house appear more lived-in.

Indeed, the overall film may have benefitted from more editing. Unfortunately, it may include too many different ideas and so detracts from the effectiveness of the main story.

Take, for instance, Pavan’s introduction to the dance company of sister-in-law-to-be, Nimisha (Amy Jackson) and her friend, Aarti (Simone Ashley).

Since Pavan has a close relationship with Nimisha and his brother, Sunil (Nicholas Prasad), Aarti piques our interest. She pays a notable amount of attention to Pavan but then doesn’t appear again.

In fact, the editing of Boogie Man unexpectedly lives up to its name since some scene changes are disorientating. One instance with Stephanie is confusing as she disappears from shot, only to explain that she’d run away much later. 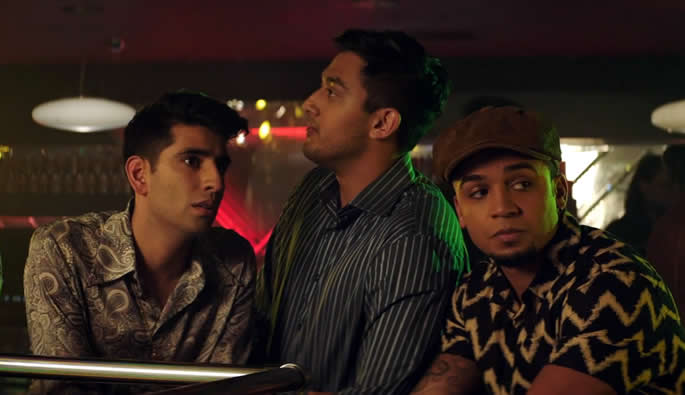 The main trio’s friendship adds to Boogie Man’s emotional resonance and all the younger cast hold their own.

Kush Khanna has the challenging job of portraying the naive Pavan. While his friends are a lot more practical, he is very much the dreamer.

In spite of this, Khanna succeeds in portraying Pavan’s sunny optimism as the actor has an engaging expressiveness. He easily charms the audience as much as other characters with a smile stretching across the screen or unrepentant exuberance.

Both friends often play the straight man to our kooky protagonist. In not being alone in questioning his more bizarre plans, it makes Pavan’s schemes more entertaining than ridiculous.

As a contrast to Pavan, Karan Gill is equally well-cast as his more sensible and perhaps jaded cousin, Rama. It’s refreshing to compare their different forms of growth as Gill skilfully shows Rama’s consideration of welcoming romance.

But both Rama and Danny become irritated with Pavan at different points. The former feeling undermined in his passion for dance and the latter feeling pressure to succeed academically.

However, there’s no room to explore their characters further with the already complex plot. 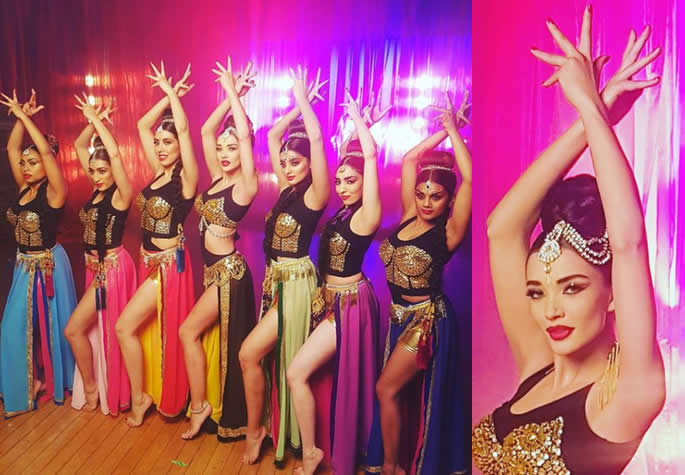 There’s a particularly fun, fast-paced moment when he simultaneously admonishes a client for a last minute cancellation while interrogating Pavan. But Rupesh offers a father-son relationship in parallel to Pavan’s deceased dad.

Pavan may mourn the loss of his father but he sometimes fails to understand the one still present.

Similarly, Shobu Kapoor is very much the mother hen on screen and off it, according to Morahan and Pears. Though, she’s not quite as strict as her character in the recent Citizen Khan.

Instead, there are particularly tender moments between her and Pavan as they look through old photographs and reminisce together. She even lovingly gives her own handmade wedding veil to her daughter-in-law-to-be, Nimisha- the opposite of the traditional image of a mother-in-law.

Boogie Man has all the drama and emotion of a Bollywood film, complete with a finale wedding dance sequence. Yet family is at the heart of this comedy, giving it real depth.

A Soundtrack To Dance and Sing Along To

Above all, Boogie Man is an ode to 70s music. The film won the ‘Best Soundtrack’ award at the UK Asian Film Festival and deservedly so.

Noted for directing music videos, Morahan showcases the excellent range of original music alongside some of the best 70s tracks.

Its stellar soundtrack adds to everything from the comedy’s light-hearted feel to the characterisation.

Ramon Tikaram is generally a stand-out as Pavan’s uncle and Rama’s dad, Deepak. But, we first meet him belting out ‘Jaan Pehechan Ho’ in his catering van. Even in his lamentably few scenes, he brings the audience to tears of laughter with his quirky character.

However, this 70s nostalgia most clearly reflects Pavan. He’s a true romantic, believing in the power of love or music to bring people together.

Ultimately, this contributes to creating a very wholesome and uplifting film. It deals with some dark or mature issues but goes to show that like Pavan, “just because you’re growing up… doesn’t mean you need to be a grown-up”.