Diljit Dosanjh is the Disco Singh

Punjabi cinema returns with another laugh out loud comedy from the hit team of Anurag Singh and Diljit Dosanjh. Disco Singh stars the beautiful Surveen Chawla opposite Dosanjh.

Diljit Dosanjh becomes a Punjabi Superman for his latest cinematic venture, Disco Singh. Bringing romance and comedy together, Diljit stars alongside Surveen Chawla, who plays his very own ‘Sweety’.

Taking disco fever with a Desi twist, Diljit plays the role of a Sikh dancer vying after the affections of the beautiful Sweety.

A cute on-screen couple, Diljit and Surveen were last seen in Saadi Love Story (2013); the Punjabi chemistry between the two is undeniable and audiences will be eager to see this jodi back together again. 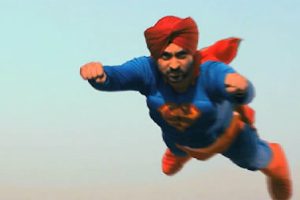 The movie is directed by Anurag Singh and the film is made under the PTC Motion Pictures banner.

After the successful delivery of Jatt and Juliet (2012) and Jatt and Juliet 2 (2013), this film has high expectations from the hit team of Anurag Singh and Diljit Dosanjh.

The film is produced by Rajiee M Shinde and Rabindra Narayan. The film also sees Upasna Singh, Apoorva Arora, B N Sharma, Karamjit Anmol and Chandan Prabhakar in supporting roles. The supporting cast just cements the funny silly package that will be delivered to tickle the audience’s funny bone.

Lattu Singh (played by Dosanjh) named ‘Lattuprasad’ by his parents, is a struggling singer and dancer, who is barely making ends meet by performing in parties. His band is called ‘Disco Singh’.

Sweety, on the other hand is seen in stark contrast to Lattu. She is a successful model. Despite both of them being from the creative field, they are poles apart in terms of success. 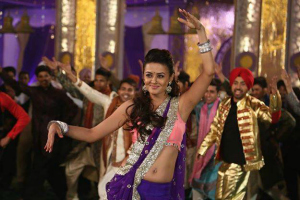 Paaji (played by Manoj Pahwa) gets Lattu to do something for him in return for some money. The movie revolves around Lattu’s effort to handle Paaji while trying to woo his crush Sweety.

There are some funny scenes with simpleton Lattu obediently keeping his distance from the actress by using a tape measure as instructed by Don Paaji. You can’t help but find that endearing. Speaking about the film, Dosanjh says:

“Making a rom-com isn’t child’s play. To strike a chord with the audience demands a lot of creativity, which Anurag has tried to bring about by introducing various special characters.”

“The film revolves around a light-hearted owner of a musical band, me! It’s about how my simplicity and attitude steals Surveen Chawla’s heart and the chaos in between.”

Promos for the film have rapidly gone viral, highlighting the huge Punjabi fan base that Pollywood enjoys and with Diljit Dosanjh the new king of Punjabi cinema enjoying hit after hit, Disco Singh is sure to pull in a big crowd:

“All actors really enjoyed every minute of the making of this film. It’s a family film highly packed with haute comedy. The audience will enjoy noticing my simple and straightforward attitude towards life and this plays to win heart of a girl,” Dosanjh adds. 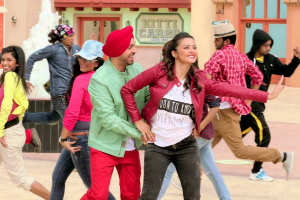 Dosanjh is a well-known Punjabi singer who has ventured into acting. Lately numerous singers in both Bollywood and Punjabi cinema are rightly making the move of starring in front of the screen, rather than letting some handsome face mime their voice.

The music of the film has been well received and offers authentic Punjabi beats with a cool mellow Bollywood-esque feel. In particular, ‘Happy Birthday’ and ‘Beautiful Bilo’ are sweet, easy listening songs that fans can enjoy and are a good testament to the light-hearted film.

Sometime back, Punjabi movies were very raw in every aspect of film-making. The attention to detail, make-up, clothes and even production was minimum. However, recent movies likes Jatt and Juliet, Carry On Jatta (2012), Mirza – The Untold Story (2012), to name a few, have shown great improvement.

The quality is so good that the Punjabi audience fan base that also consists of overseas audience has not only increased but it also has encouraged filmmakers to put in even more effort to sustain the interest. 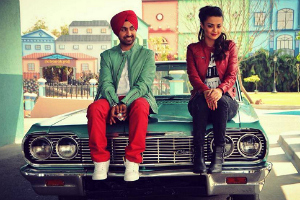 This has been rewarded by letting them tap into a portion of the huge overseas market for Indian cinema that Bollywood has retained for a long time. But as director Anurag admits: “If the content is good, people will appreciate it.”

Punjabi movies are now competing for audiences in the same cinemas as Bollywood movies overseas and this is just an indication of the huge demand that Pollywood has established in the overseas market. With this trend moving upwards, the quality of movies can only progress.

Interestingly, online reports suggest that Disco Singh is already a hit among Bollywood with music producer Himesh Reshammiya having already bought the remake rights for the film for Rs. 3.5. It is thought that he will co-produce the remake with Salman Khan. It will also be made in Bengali, Telugu and Malayalam:

We all like movies that are light-hearted entertainers that can make us smile and, even better laugh. It doesn’t matter if it is just silly humour. There is some kind of weird comfort to it. Don’t miss the Singh Superman fly from April 11.

After a short stunt on stage, Archana decided to spend some quality time with her family. Creativity accompanied with an aptitude to connect to others got her to write. Her self motto is: “Humour, humanity and love is what we all need.”
Main Tera Hero ~ Review
Amitabh Bachchan is ghostly in Bhoothnath Returns