Directed by Pankaj Batra, the film stars Diljit Dosanjh as the lead, alongside a strong supporting cast of well-known names from the Punjabi industry including Yograj Singh, Jarnail Singh, Sunanda Sharma and Jagjeet Sandhu.

Sajjan Singh Rangroot commemorates the contributions of the Lahore regiment serving under the British Indian Army during the World War I. Centered around the character of Sajjan Singh played by Diljit, it echoes the gallantry of Singh and his fellow brothers.

Unfortunately, the sacrifices of these Indian men, 1.5 million in total, have been forgotten over the years. Therefore, the film is to be praised for bringing their stories back to life and commemorating such an integral part of Indian history.

What the film excels in is the portrayal of the sentiments of brotherhood and empathy. The story denotes how sheer courage to fight against an enemy that outnumbers them gains the Indian soldiers much-needed respect from the British soldiers.

It captures a sense of brotherhood that has been built among the two troops after being stranded with a limited supply of food and ammunition during the war.

One has to credit Pankaj Batra for bringing these untold stories to celluloid. The high production values are justified as the finished product looks far better than expected. It is a treat for audiences who have a penchant for films with a mix of action as well as emotion.

A Forgotten Part of Colonial History 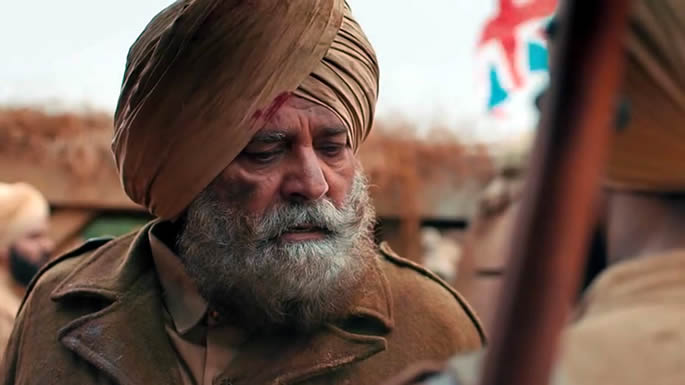 The non-linear narrative shuttles between Singh’s struggle in the war zone and the memories of his betrothed, Jeeti played by Sunanda Sharma. It isn’t always as smooth a transition one would expect.

What seems slightly far-fetched is the additional angle of present-day Syrian conflict added at the beginning where a Sikh aid comes to rescue fleeing Syrians providing them food and shelter.

The parallel drawn between the two situations is somewhat problematic. India being colonised and attaining freedom 70 years ago is not the same as the Syrian war, and providing them with speeches of Sikh valour is unfortunately of no help.

In terms of memorable scenes, at one instance Diljit’s Sajjan Singh who is headed to war in a foreign land, stops by and shares his food with a little British girl who is fleeing from her unsafe war-stricken home. The innocent child looks up to this Indian soldier with hope for safety in her eyes. Devoid of any dialogues, the scene creates the required effect on the audience, bringing them a sense of pride.

Themes of the oppressor versus the oppressed run throughout. One instance in the film shows Indian troops being denied the spread of food available for the British soldiers. Instead, they are served with mere dry bread and black coffee.

It is these few moments in the story that are left unexplored by the writers. Much of the focus remains on Sajjan and his insistence on seeing the wider picture of helping the Englishmen in the war and freeing the country from their rule.

Comic relief is injected through the character of Mela Singh and his tales of war. It works well to maintain a balance between the emotional and physical conflicts affecting Sajjan and his fellow men.

There is a thin line between patriotism and jingoism and the film oscillates between the two at certain points. Scenes such as the one where the Indian soldiers are pitted against the English in a hand to hand combat as a mock test offer a powerful commentary on the status of colonised Indian soldiers.

At times, it is the formulaic foundation of the story that hampers its experience. What motivates the men of a colonised country serving as slaves to fight for their coloniser in one the most damning wars in history is what the writers seem to miss.

Instead, they appear to rely on two-dimensional characters, Baisakhi celebratory songs in trenches and the long wait of a bride-to-be as her betrothed goes to war. 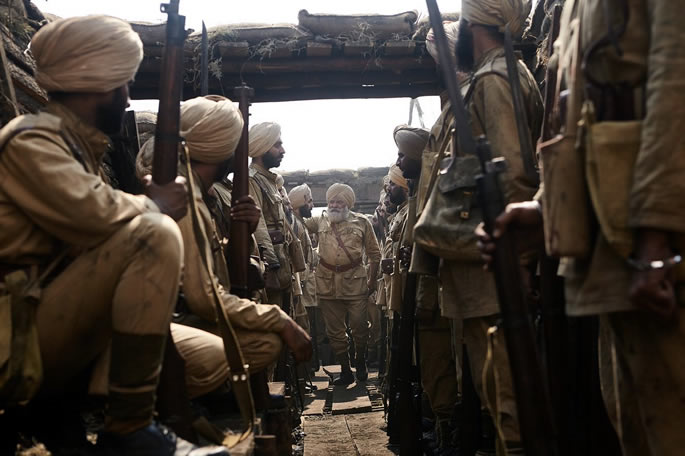 Coming to direction, Pankaj Batra’s ambitious attempts of making this film stand out and minus the sheen of regional cinema is noteworthy. It indeed goes beyond the reach of other Punjabi film.

Much effort has gone into filming the action sequences and they turn out decently well. Long shots from the village portion of the story and also the song ‘Pyaas’ are enticing and add colour that contrasts with the circumstances of Sajjan’s future. The visual effects seem weak specifically in the bombing scenes but an attempt of this level is a first in Punjabi cinema and one can expect it to only get better from here.

Overall, Batra’s vision of hitting the emotional buttons through this story comes through as the audience finds themselves rooting for the survival of Sajjan and his fellow soldiers.

Constructing a period drama isn’t an easy task and the biggest burden falls onto the production design team. In this film, they replicate the era through old transistors, outdated explosives and rifles but lose out on the getting the costumes right.

Diljit’s linen Kurtas look straight out of Fabindia stores and in one of the shots where he removes his footwear, a glimpse of the brand print doesn’t miss the eye. It is such nitty-gritty elements that may put off an invested viewer but for the larger audience, it is still a win-win.

One thing that holds this film together is Vineet Malhotra’s cinematography. Even as topographies change, the visuals from the war zone to the villages of Punjab look equally stunning. Lighting too is carefully crafted in the bunker scenes that enhance the conditions well. 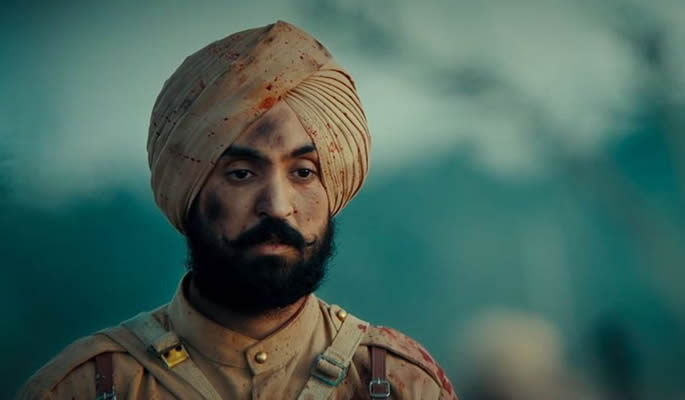 Diljit is undoubtedly one of the best performers in the film. He brings the honesty and grit of Sajjan Singh to life with great effort. The actor shows a smooth shift from being the lovestruck fool to a dedicated and fearless soldier who dreams to see India free from the clutches of the British.

Even as he is becoming a successful actor in Bollywood, it is by supporting such films that Diljit can expand the audience for Punjabi cinema.

Another actor who makes a strong impact in the film is Yuvraj Singh’s father, Yograj Singh. As the Subedar of the Indian troops, Singh’s baritone is enough to discipline the young men. His emotionally stirring speeches to inspire the troops make for the powerful portions of the film.

Sunanda Sharma who is a popular Punjabi singer, debuts with this film but is seen in a limited role. Most of her screen-time is wasted in smiling and looking away with only a couple of dialogues.

Jarnail Singh’s Mela Chacha is one character that many will remember and even joke about. His natural act brings out the comical elements of the gritty surroundings.

Interestingly, the British officers in this film, unlike every other Indian film, do not speak in broken Hindi here. It’s almost as if Yograj Singh’s Subedar Singh is well versed in English to not need any interpretations as they discuss war strategies.

The casting of British actors also seemed to have been a problem since none of them come close to having a proper British accent.

As for the hits and misses, the languid pace of the film clubbed with its predictable storyline are slightly disappointing. Particularly for a film with such high expectations. But it is the strong performances by the entire cast that keep you entertained.

For Diljit fans, Sajjan Singh Rangroot is certainly a must-watch considering how confidently he owns this role.

What this film mainly suffers from is an uninspiring script. The stress on having more punchlines over heartfelt dialogues strips down the sentiments that it wants to convey. The inclusion of various sub-plots takes away the focus from a wider story that could have been more invigorating.

Yet, a decent attempt and laudable example for taking a big step in regional cinema.

Surabhi is a journalism graduate, currently pursuing an MA. She is passionate about films, poetry and music. She is fond of travelling places and meeting new people. Her motto is: "Love, laugh, live."
Alia Bhatt suffers Major Injury shooting for Brahmastra
Sacred Games: Netflix series with Saif and Nawazuddin announced