"I think our film has created history in that sense"

Suraj Pe Mangal Bhari star Diljit Dosanjh shared a screenshot of shows which were sold out at a multiplex in Mumbai on November 17, 2020

The actor went on to thank the audience and fans for giving so much love to his film even during the Covid-19 pandemic that is showing no signs of slowing down in India.

(Watching the film with families during the Coronavirus pandemic is a very big deal. Thanking you from the bottom of my heart. I am not a very big star but I am still doing my part. It is a tough time for cinemas but some intellectuals are acting too smart.)

Diljit Dosanjh stated that his new release has created history by becoming the first mainstream Hindi film to release in Indian theatres since the government ordered lockdown in March 2020.

Maharashtra government had only permitted the reopening of theatres on November 5, 2020.

One of the worst-hit Covid states in India, there are currently over 200,000 active cases in Maharashtra’s capital Mumbai.

The film got a huge following in metropolitan cities of India, however, many cinemas remain closed due to rental disagreements during the pandemic period. 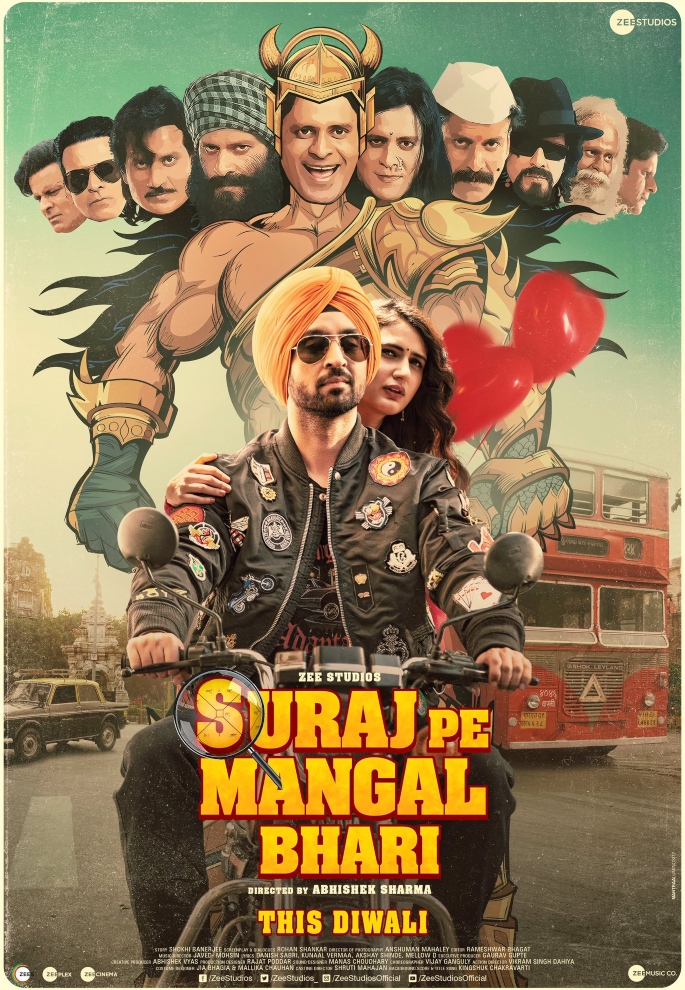 Diljit went on to share: “We are feeling lucky that our film is the first one to release in theatres after a long lockdown.

“I think our film has created history in that sense and if audiences will come to watch our film then it will again create history.

“It’s a family film, so I hope that families would come in large numbers in this festive season to watch our film.”

Diljit was not disappointed as, despite the risks associated with the gathering of a crowd and social distancing norms, audiences did storm the theatres.

Talking about the film, Abhishek shared:

“The film is set in the 90s. We have Manoj sir playing a wedding detective, who does a background check of grooms, which was a norm during those times.

“There was a time when there was no mobile phone or social media and people had to deal with everything physically.

“It is very much in the vein of films made by Hrishikesh Mukherjee and Basu Chatterjee.

“It is a clean family-comedy. It is a funny film but not a slapstick. It is a social satire.”

“I think the real fun of watching the film is in a theatre.”

“The audience shouldn’t feel scared because theatre owners are following the protocols laid down by the government while screening the film.

“They are making sure that people who come to watch films are safe, so I would urge people to visit theatres and enjoy our film.”

Unlike the traditional release of Bollywood films scheduled on Fridays as per the norm in India, Suraj Pe Mangal Bhari hit theatres on Sunday, November 15, 2020, amid the Diwali celebrations.

The audience at some Indian theatres were spotted standing in queues, longer than usual due to social distancing norms.

#chalocinema people are reaching cinema halls to watch our film #SurajPeMangalBhari Great news pouring in from all across. pic.twitter.com/MoxLkKmSdn

Diljit Dosanjh, Fatima Sana Shaikh and director Abhishek Sharma even visited a multiplex in Mumbai to gauge the response of the audience to their film.

In one of the videos, they were seen conveying their gratitude to the viewers.

“A heartfelt thank you to all those that took out the time to come to theatres to see our film.”

Akanksha is a media graduate, currently pursuing a postgraduate in Journalism. Her passions include current affairs and trends, TV and films, as well as travelling. Her life motto is 'Better an oops than a what if'.
Milind Soman says People must act ‘Smarter than Monkeys’
ZEE5’s Black Widows Trailer is Out & Literally Killing It