DESIblitz reflects on 70 Years of India’s Partition in Birmingham

1947 marks India’s independence and the birth of Pakistan. DESIblitz arranged a special event in Birmingham to reflect ‘The Reality of Partition’ 70 years ago.

On Monday 14th August 2017, DESIblitz presented a very special event at the Ikon Gallery in Birmingham to commemorate the 70 years since the partition of India and the creation of Pakistan in 1947.

The event part of a project produced by Aidem Digital CIC and DESIblitz.com supported by the Heritage Lottery Fund highlighted stories about the Partition of India 70 years ago.

The stories were collated as part of a special film called ‘The Reality of Partition’ made for the project featuring residents from Birmingham and the Black Country who shared memories of a period which was hugely traumatic but celebrated freedom and the birth of Pakistan.

The film was made for the project featuring residents from Birmingham and the Black Country who shared memories of a period which was hugely traumatic with a tremendous loss whilst celebrating the freedom of India and the birth of Pakistan.

The Ikon Gallery hosted event attracted a fantastic number of guests showing a major interest in this era of Indian history.

With subtle nuances of Indian classical music played in the background performed by local Birmingham artists, the evening started with some social networking for the guests over canapes and bites provided courtesy of Mahir’s Experience.

The DESIblitz event then took place in the main Ikon gallery space. 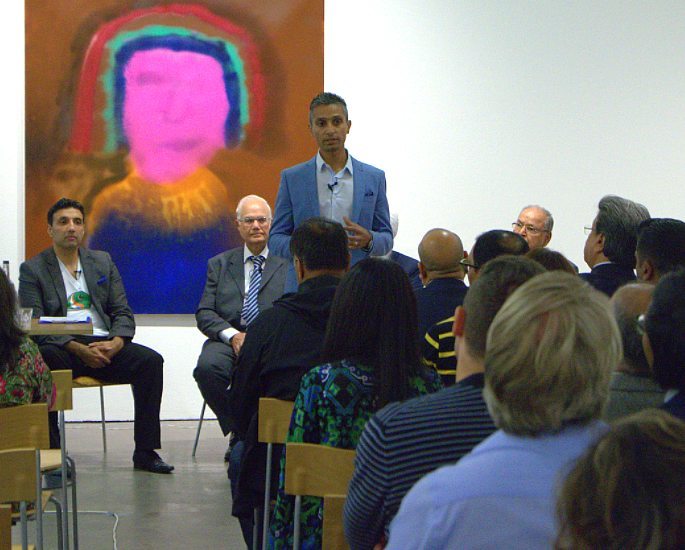 Indi Deol, Managing Director of DESIblitz.com and the project editor, opened the evening by giving a very special speech about the curation and the challenges of the project, saying:

Highlighting the importance of partition as a significant part of history, he urged people to talk about such events in order to be a stronger community going forwards.

A specially edited version of the film with some very moving and emotional recollections from the contributors was then shown to an intrigued audience at the event: 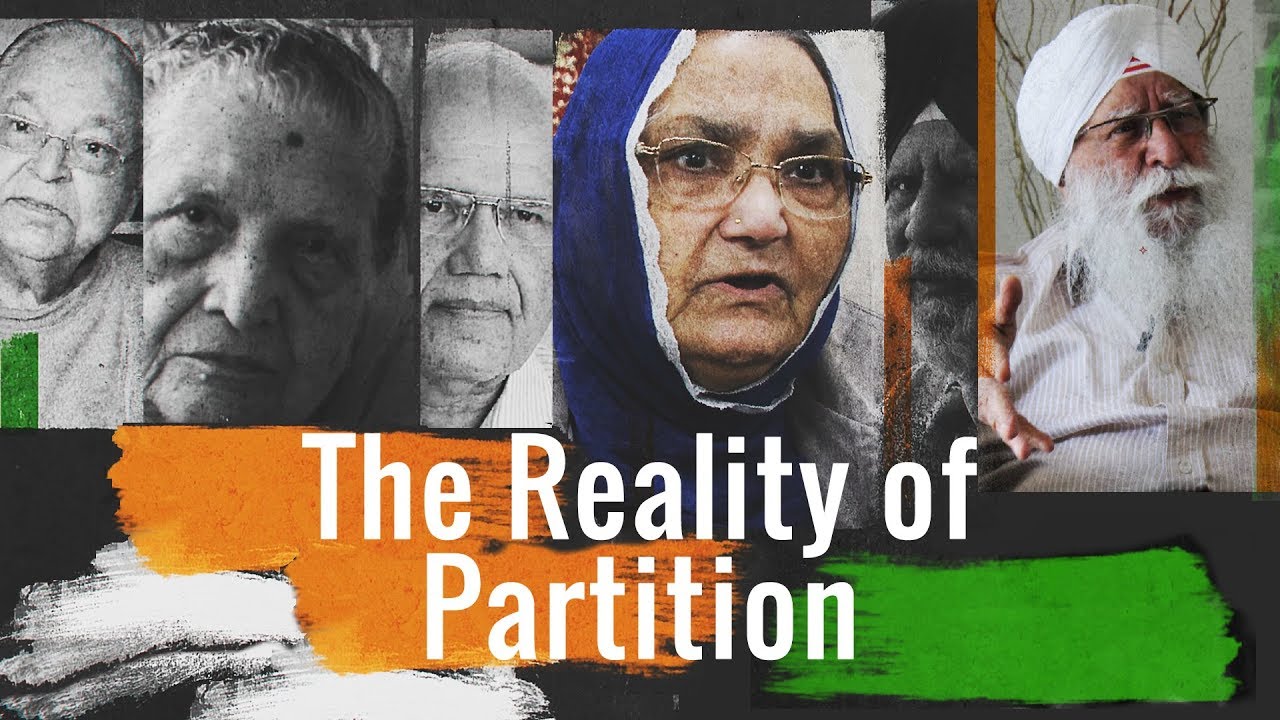 The full film had daily screenings at the Ikon Gallery from 8th August 2017 until 21st August 2017, attracting over 850 visitors who came to watch it, providing very supportive and positive feedback. 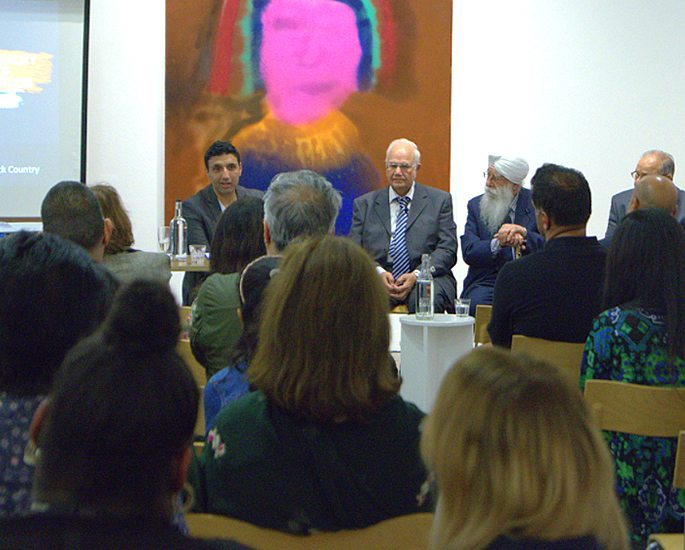 The Q&A for the event subsequently took place with the esteemed panel of guests.

Many more revelations from the panel were unveiled about their individual and collective experiences of the 1947 partition of India.

Prior to the partition, Dr Riaz Farooq informed everyone about how the British colonial rule introduced the ‘divide and rule’ policy and how the GDP (Gross Domestic Product) was brought down to 2% to give them huge leverage over the natives. Leading to the 1857 freedom movement getting started in India.

“The Mughal empire in India before the British Raj had GDP of 25%. It was a golden sparrow. That’s why it attracted them so much.”

“The East India became the British India and they started to take a foothold in India.”

“Whatever they did, they did for their own purpose.”

The discussion then moved to a few years before Partition, the world war one in 1914 and the political movements during that time.

Dr Zahoor Maan highlighted how Congress under the leadership of Gandhi mobilised Muslims to create the Khilafat movement to join forces for Indian freedom from the British.

Subsequently, one of the biggest massacres in Punjab took place. Dr Maan explained:

“There was the Jallianwala Bagh (Amritsar) massacre where the people of Punjab rose against the British and General Dwyer ordered the shootout where thousands of people were killed.”

Next was the discussion on life before partition in India, especially in the villages and cities.

The third guest, Bikram Singh, who was born in 1929, in Kapurthala state, told the audience it was a very prosperous time. Everyone was living together happily. 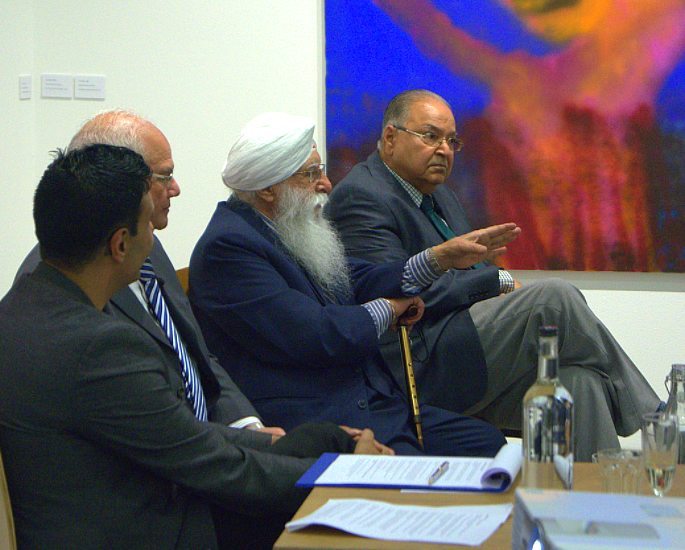 The only differences known were about different religious festivals. Everyone appreciated each other’s religions and even “we all celebrated the [religious] functions together”.

“I had Muslim classmates. We played together, fighting together and created mischief together!”

The guests then talked about the unsettling stories about rebelling against the British wanting them to leave India.

The ideology the ‘Muslim League’ and the prospect of a new country called Pakistan was then introduced into the discussion.

Dr Farooq explained that Hindus had aligned themselves second to the British, by learning English quickly and gaining authority.

This suppressed Muslims and led to the consensus “if we are not allowed to practice our religion the way we want to, there’s no point living here.”

Bikram Singh then told the audience about partition starting and the huge confusion and worries. Especially, since there was no idea of the border.

Nakoder and Jalandhar had the majority of Muslim populated areas at the time in Punjab.

The migration started with thousands and thousands of people starting to get displaced as soon as partition became a reality. Reciting this time Bikram said:

“The caravans started coming. The people from Pakistan. Train loads. By foot by cycle or whatever was available. It was terrible.” 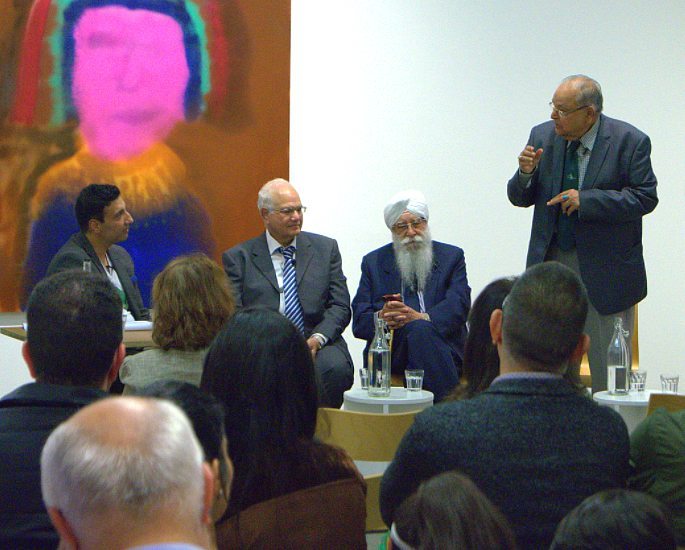 Dr Zahoor Maan added his family were on a train going to Pakistan. He recalls:

“My uncle was slashed completely and the whole train was massacred. His wife and 6-year-old daughter were kidnapped and so were other women.”

Camps were set-up where Muslim refugees started to gather and they were helped by villagers who lived with them irrespective of backgrounds.

The discussion then led to questions and answers about post-partition and the formation of Pakistan.

Dr Farooq recalled how the border line originally agreed for Pakistan was not the outcome due to the conspiracy between Nehru and Lord Mountbatten’s wife. He said:

“The British realised the original line was not providing any access to Kashmir. So, the line was changed.” 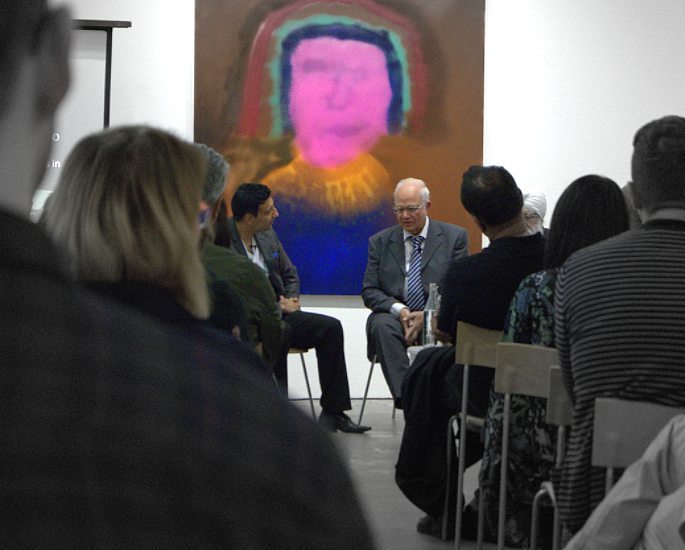 This resulted in his family having to move to Pakistan. If the original line was in place “there would’ve been much less casualites”.

Dr Zahoor Maan and Dr Riaz Farooq both discussed the Muslim League and the quest of Muhammad Ali Jinnah to form Pakistan.

It was revealed by Dr Farooq that the idea of a ‘Pakistan’ was also something Winston Churchill wanted. Purely for the interest in oil and to stop Russia forming alliances with India.

Dr Maan told the audience about his trip from India to Pakistan which took “3 hours” and how people “carried bicycles” on their journey. And revealed how they acquired “a huge villa, newly built” near the Ravi river which was bigger than the “mud house” they left behind.

Then Faisal asked the panel about their migration to the UK and in the case of Bikram Singh, Kenya in Africa first.

Bikram left India to join his father in Kenya who was already there from the 1920’s. In December 1948, after partition, Bikram migrated to Kenya and told the audience about his life there. Subsequently, he arrived in the UK in January 1967.

Dr Farooq told the audience how his family moved to different places in Pakistan due to his father’s posts changing until they settled in Karachi. Due to lack of employment opportunities, Dr Farooq received an employment voucher for the UK and moved. He said:

“When I arrived at Heathrow airport, they put a stamp on my passport ‘restriction free’ and said ‘Welcome to United Kingdom’, I still remember that!”.

Dr Zahoor Maan’s story told us how his grandfather was married to a Scottish lady in Glasgow and his son lived in Birmingham. They ‘match made’ to marry him and requested him to come to the UK. He said:

This concluded the Q&A session for the panel.

A Volunteer’s Outlook and Final Poem 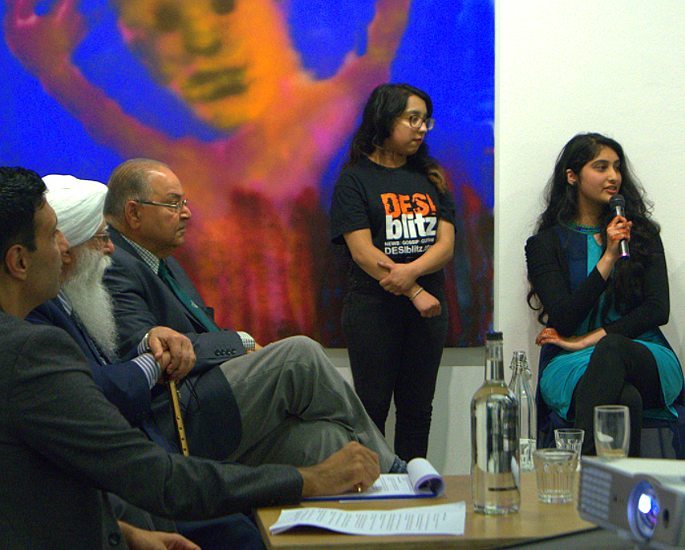 Nisaa Hawa a young aspiring journalist from the DESIblitz.com editorial team treated the audience to her experience as a volunteer working on the project and how she learnt so much, especially about partition and this period of history.

The audience was then given the opportunity to ask questions of the guest panel which resulted in a lot more fruitful discussion and debate about the partition period and the politics surrounding it.

To round up the special evening, Nighat Farooq, read out a specially written poem for the event called When the Land Divided by Talat Saleem with complete English translations on a screen. 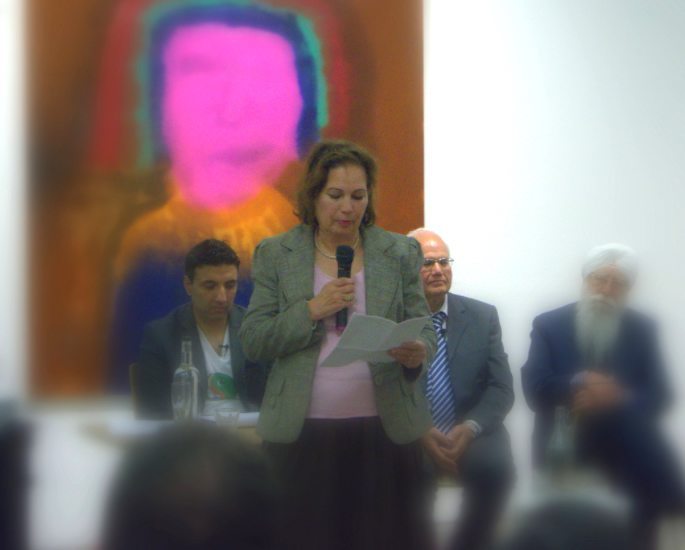 Faisal Shafi completed the formalities with thanks to all of the incredible contributors, team, volunteers and the support given to the project by everyone involved.

After the close of the event, Faisal Shafi said:

“It was a great privilege to moderate a very special Q&A on the 70th anniversary of the independence of Pakistan and India.

“We are delighted that the event held at Birmingham’s Ikon Gallery on 14 August 2017 was so well received by everyone.”

“Many thanks to each of the contributors of the film and project, highlighting the reality of Partition.”

Media interviews took place on the evening with BBC West Midlands and GEO TV from Pakistan having conversations with the panel guests and team.

BBC Asian Network and BBC West Midlands Radio with Sunny and Shay discussed the project with Indi Deol and Dr Riaz Farooq on their shows.

Indi Deol who was extremely pleased with the outcome of the project said:

“The last 9 months have been a huge learning experience as we talked to the very people who have first-hand memories of the 1947 partition of India. Many of these memories from the people in this region have not been documented and so it was of the utmost for us to present and to capture them correctly before it’s too late.

“I would like to thank HLF West Midlands for their support in this project and would urge anyone who is interested in the reality of what happened during this dark period in history to explore our findings which will now be archived at the Library of Birmingham for years to come.

“As we move forward,  I would like to see this subject taught in our schools to our children so that they too can learn the history of this country and how it impacted on the world we live in today.”

The event was a huge success with everyone attending going away being more educated and informed about what took place in India 70 years ago and the reality of partition.

For more photos of this special event please visit our gallery here.