Survivors of Partition have been able to cross the India-Pakistan border thanks to virtual reality (VR).

One of those is 83-year-old Ishar Das Arora who was sitting at his home in Delhi but was transported to his birthplace in what is now Pakistan.

The VR headset plays a 3D video recorded in his home village of Bela.

It is part of Project Dastaan, a documentary project that delivers immersive video experiences to survivors of the 1947 Partition.

Relations between India and Pakistan remain tense and travel between the two countries is difficult so Project Dastaan’s two dozen filmmakers and volunteers, based in India, Pakistan and the UK, travel for them, recording 3-D videos and 360-degree vistas of the hometowns they left behind.

The project was founded in 2018 by three friends whilst studying at Oxford University.

They say their aim is not for survivors to relive the horrors of Partition. Instead, they want to help unearth and document survivors’ childhood memories from before Partition and show them what their birthplaces look like now, 75 years on.

The project has received support from arts foundations, journalism nonprofits and the National Geographic Society.

Some of its short documentaries are being screened this summer in India, Pakistan, the US and the UK.

One of the founders is Ishar’s grandson. 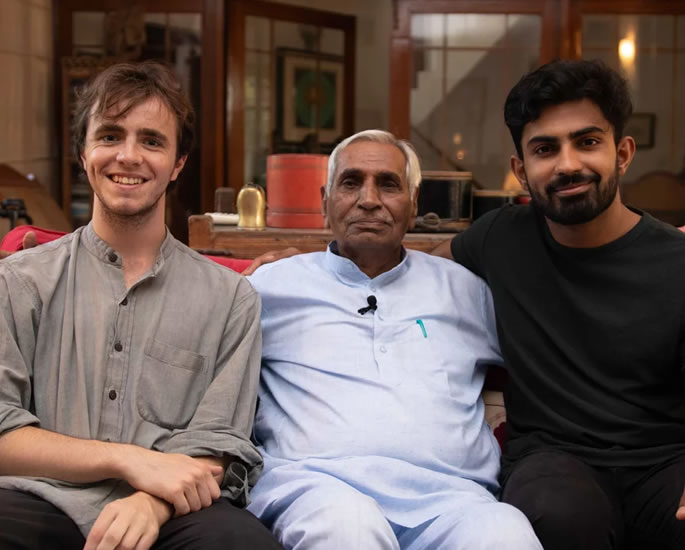 Ishar recalled: “As we fled, I saw our village go up in flames. All the Hindu houses were set on fire.”

But his neighbour – Bela’s village chief – protected them.

Ishar continued: “He hid us in another building and sat atop the roof to fend off mobs of attackers.”

“Several years ago, we actually went to a wedding in Amritsar, and that’s when he started talking, that there was a camp near there.

“My grandfather is the only one in the family who can write in Urdu, and I’d always wondered, ‘How come you can do that?'”

At the wedding, Ishar’s memories flooded back. That gave Sparsh an idea.

While studying in the UK, Sparsh made Pakistani friends.

“It’s difficult, for example, for me to visit India. It’s hard for [Indians] to visit Pakistan.

“So how can we collaborate to kind of show former refugees their ancestral homes again?”

Together with Sam Dalrymple, they founded Project Dastaan.

Saadia continued: “When you’ve grown up in India or Pakistan, you have a very one-sided official history.

“We often joke that if you put together the national curriculums of India and Pakistan, maybe we can have kind of a story of what actually happened and what our actual histories are.”

They subsequently applied for grant money, got sensitivity training and pulled out a map of the subcontinent.

Sparsh’s journey to Bela was a difficult one as it is so small that it is not on Google Maps.

He recalled: “When we got to the town, it was just a little hamlet – a collection of a few mud houses, and a few concrete houses now as well. It was completely empty.

“I’m standing in front of this mosque like, ‘How am I going to find anything here?'”

He approached a woman on the street as he wanted to find the family of the village chief who saved his grandfather during Partition.

Sparsh knocked on the door and a man answered.

He told his story again and the man replied:

“That was my grandfather, who saved yours.”

Word soon got around and the village erupted into celebrations.

Sparsh was taken on a tour of the village, which he filmed. Villagers also recorded video greetings for his grandfather.

Sparsh returned to Delhi and he edited his video from the trip. He presented the video to his grandfather.

“He often doesn’t show it in the moment, but then I’ll get a text message at like one o’clock in the morning saying, ‘I feel so emotional, thank you so much’.”

Project Dastaan has produced dozens of similar videos, reconnecting 30 Partition survivors with their ancestral homes in India, Pakistan and Bangladesh.

While some places have remained the same, others are different.

Sam explained: “You go in search of a small building that was mud-brick, and everything is now super-modern – multistory apartments and glass-fronted shops – and the only thing that remains is an old well or a tree.”

Sparsh added: “Just the simple fact that [my grandfather] was saved by Muslims!

“He was attacked by Muslims and also saved by Muslims. That’s not something that fits neatly into the boxes of either Indian or Pakistani national history.”