The designer duo brought ’70s and ’80s disco glamour to the forefront of the fashion scene with their style, set, and music choices.

With shiny disco balls hanging from the ceiling, and abstract floor panelling paving the runway, the power house were all set to showcase their 120 garments.

Jessie Randhawa shimmied down the runway to the song ‘Aaj Ki Raat’, and wore a gorgeous organza gown which was layered, ruffled, and glittered to typify ’80s fashion entirely.

Anna Bredmeyer also graced the runway in a selection of shift dresses, maxi-gowns and jumpsuits. 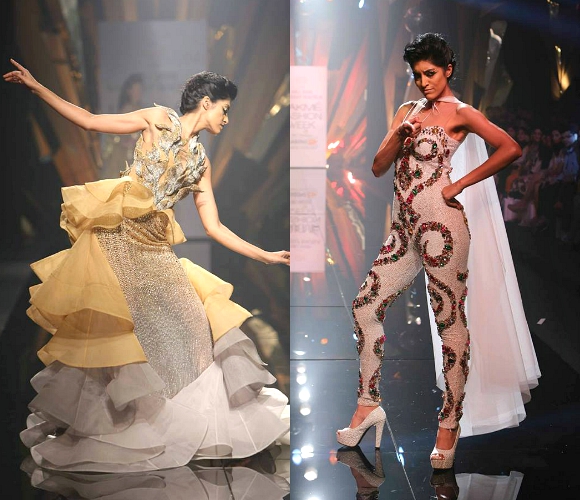 The ensembles were extremely lavish. ‘Beetle Wings’ featured pleated designs with beaded embellishments to emphasise the carefree, playful resonances of the 70’s and 80’s.

‘Hearts’ was dedicated to the saree, and saw the avatars draped in Swarovski crystals and cascading frills, creating an ethereally glamorous image of a disco diva.

Their final look, ‘Sona’, thrilled the audience with a sea of shimmering golds. 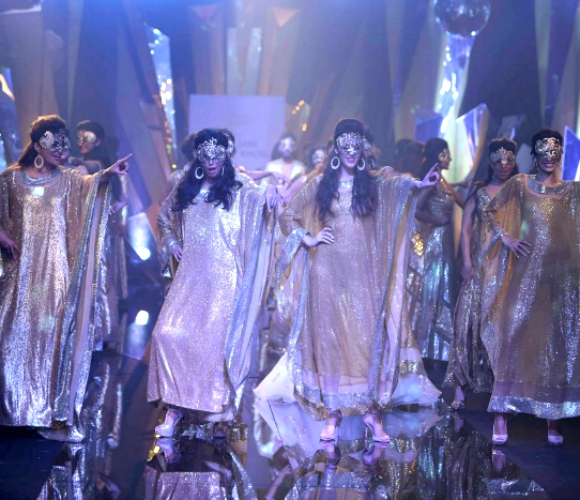 Adding to the flare of the evening was the highly anticipated Gen Next show, which welcomed seven emerging designers to the stage.

Charchit Banfa unveiled a menswear and womenswear line, which had clear, fresh cuts on all of its designs.

Womenswear comprised of zippered jeans, gold bermudas, and mesh tops which could be interchangeable between the sexes. 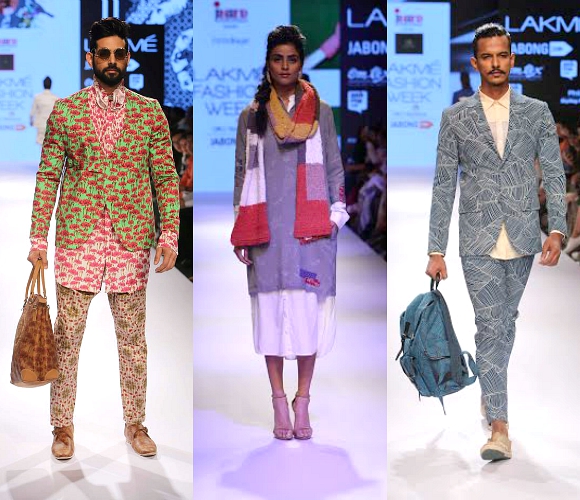 Jebin Johny’s collection, ‘KathaKubuki’, fused together dance forms from India and Japan, which translated into the designs.

The eight quirky avatars were vivid in colours, striking in their silhouettes, and abstract in their prints.

Ishita Mangal exhibited an array of unconventional designs in her ‘Misprison of Treason’ collection.

Eye-catching prints, slogans and accessories, and cut out ensembles were designed specifically for the modern woman.

The blood-stained scarf concept was exceptionally stunning, and brought to life the theme of crime that Ishita so desired to focalise upon.

Shivangi Sahni presented an amalgamation of elegance, luxury, and class with a boho-luxe collection.

Using tasseled fringes, as well as thread embroidery and suede detailing, the designs were stylishly subtle, and targeted towards the free-spirited woman.

The designs were very much quirky in their patterns and prints. Sport bomber jackets, track pants, and cropped ensembles contrasted against the traditional Indian jewellery used.

The fusion of times were meticulously spectacular, and brought a mix of cultures, crafts and colours together.

Lakmé Fashion Week Winter/Festive 2015 has had the ultimate opening ceremony. With many more designers to come, it looks set to be one show-stopping week!