Lakmè Fashion Week Winter/Festive 2014 closed in style, proving once again that South Asian fashion is really on the up. DESIblitz takes you through all the highlights, showstoppers and celebrities from the last few days.

There was an interesting mix of fusion between Indian and Western styles in the designs.

Day 4 and 5 demonstrated that South Asian fashion is going from strength to strength with some incredible designs and outfits that will make any young Desi female swoon.

During the last two days, there was an interesting mix of fusion between Indian and Western styles.

This day opened with the designer Mrinalini Chandra, who presented a beautiful jewellery collection which was crafted as a tribute to Shakuntala. In Hinduism, Shakuntala is the wife of Dushyanta and the mother of Emperor Bharata.

Named after Shakuntala, the show was an array of handcrafted couture jewellery which took the form of the flowers, leaves, insects, monkeys and fish that feature in Shakuntala’s world.

Aunshree Reddy also showcased her bridal collection at Lakmè 2014. Since her debut at Lakmè Summer/Resort 2013, Reddy has risen to fame in the fashion world.

Her 2014 Winter collection was called ‘Portabello – The Indian Chapter’ and it was reminiscent of vintage British charm, but with a distinctive Asian twist. 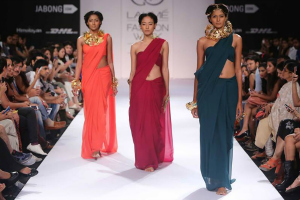 Next was the elegant and feminine show from Sougat Paul for his label ‘Soup’, which had a very romantic feel.

Entitled the ‘Blower’s Daughter’, the garments were inspired by the tranquil beauty of the song of this name.

The look was a girlish peasant style, with a gentle traditional charm. Doodled floral motifs and peasant check prints were added to delicate fabrics such as lace, organza and Dupion.

For his showstopper, the designer chose the Bollywood actress Geeta Basra, who walked the runway in a blue gown that was draped and featured cut-outs for a stand-out style.

Day 4 also marked the first time ever that the British high street brand Miss Selfridge featured at Lakmè Fashion Week, and they finished off the day in style.

The collection featured a variety of silhouettes and styles, with the colours dark red and black beautifully offset with highlights from sequins and whites.

Eli Avram of Bigg Boss 7 closed this show, with her curves in a blood red gown making her the attraction of the night.

Highlights included a stunning showcase by the designer Neha Agarwal, whose collection was titled ‘Mille Fleurs’, meaning ‘a thousand flowers’.

This Hyderabad based designer put forward a modern interpretation of seventeenth-century French embroidery, with the lovely Esha Gupta taking to the runway to model her garments.

Agarwal said of her inspiration:

“It’s a tribute to today’s trend setting fashionista who is flamboyant and vibrant, but still carries the ethnic essence in her heart.”

Next was the designer Ridhi Mehra with her ‘Mystical Nuit’ collection, in shades of black, beige, blue and black, inspired by the night sky.

This collection featured structured silhouettes and classic designs, with embellishments like resham, zardozi and beadwork. However, Indo-Western dresses, skirts and trousers provided a fusion element to the show. 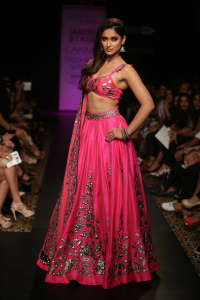 As Lakmè 2014 drew to its finale, the season’s most awaited collection was at last presented: Manish Malhotra’s ‘Gloss’ bridal show.

The range was inspired by Lakmè’s new makeup collection, ‘Absolute Gloss’, which was worn by all the models and complimented Malhotra’s designs.

The couturier demonstrated his skill once again, with a breathtaking take on the bridal culture in India, maintaining Malhotra’s personal style.

This show also included props provided by the Great Eastern Furniture Company, which set the scene as models depicted a tableau of bride sitting at her dressing table preparing for a wedding party.

The drama continued as Varun Dhawan made a surprise entry to applause from the audience.

The show’s highlight was the star Kareena Kapoor Khan, who glided down the runway in glittering silver over a shaded shimmering diaphanous panelled lehenga, and a grey tulle cape with rose motifs.

Throughout the show, Malhotra reinvented the lehenga with flowing skirts, and added an extra glitz to the clothes with glamorised racer backs.

The designer also created his own version of the Gown Sari and his easy silhouette gave another level of romance to the scene, whilst jewellery by Anmol Jewellers set off the outfits.

Malhotra said of the collection: “My new collection marries the concept of high-gloss with contemporary mirror-work and textured fabrics, bringing alive Lakmè’s GLOSS trend in a form with every neo-bride is wanting to explore.”

This was an incredible finale to the biggest and most dramatic Lakmè Fashion Week yet. The 2014 showcase has seen the most famous designers present, and has also given a platform to brand new talent.

Lakmè has established itself as one of the biggest worldwide fashion events, and it will be fascinating to see how the style extravaganza develops even more next year.