India’s famous Bollywood couple, Aishwariya Rai Bachchan and Abhishek Bachchan stepped on the red carpet in London UK at the premiere of their Mani Ratnam film, ‘Raavan.’ Check out our exclusive photos from the event.

"You know it's going to be exciting as an actor."

The red carpet was rolled out at the British Film Institute (BFI), Southbank in London welcoming Bollywood’s star couple, Aishwarya Rai Bachchan and Abhishek Bachchan, on Wednesday 16th June 2010, at the world premiere of  ‘Raavan.’  A Mani Ratnam film, dark and intense, telling the story of good versus bad. The stars were honoured by a fanfare of cheers from the multitudes of fans gathered for the momentous event.

India’s most celebrated couple were joined at the action-packed premiere by fellow cast and crew members including the undisputed superstar of South Indian cinema, Vikram, and India’s most acclaimed director, Mani Ratnam.

DESIblitz were also at the movie premiere, and bring you exclusive photos from the sparkling and glitzy event.

Director Mani Ratnam of  ‘Guru, ‘‘Dil Se’ and ‘Bombay’ fame,  honoured with the Jaeger-LeCoultre Glory to the Filmmaker Award 2010 at the 67th Venice International Film Festival,  selected Aishwarya Rai Bachchan and Abhishek Bachchan to perform their most challenging roles to date. They unite on screen as avatars not seen before and are joined by South Indian superstar, Vikram, supported by the talents of Govinda, Ravi Kishan and Priyamani. 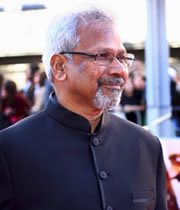 Both Aishwariya Rai Bachchan and Abhishek Bachchan are highly pleased to be selected to appear in a Mani Ratnam film again. They adore the director’s work and hold it in very high esteem. Aishwarya said, “He’s an incredible director. His cinema has a fine balance of giving you are fully entertaining commercial film but at the same time there is an incredible sense of realism in the way he tells the story.”

Aishwarya revealed, “We have been his fans before we even got the chance to work with him. So we are really happy to present our work and work in cinematic collaboration with him.” Talking about the challenges when working with Mani, she said, “You know it’s going to be exciting as an actor.” 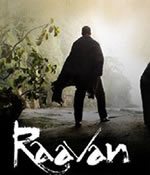 Abhishek plays the role of ‘Beera Munda’ in the film, a character who’s crude, volatile and ruthless but fights for injustice, fights for the poor and the lower castes. He is from the village Lal Matti, where Aishwarya playing a feisty classical dancer called ‘Ragini’ and her new husband, police inspector ‘Dev’ (Vikram) move to soon after their marriage.

The village is ruled by Beera. During violent clashes with Dev who wants to restore law and order, Beera’s young sister is killed. Beera then seeks revenge by kidnapping Ragini and goes on the run with her.  An injured but enraged Beera drags both Dev and Ragini into battle through the deepest ravines of the jungle and a labyrinth of human survival. The journey ahead tests the very core of their existence as the lines between good and evil, between Dev and Beera, between Ram and Raavan become ever blurred.

Abhishek said of his role,

“It has been a wonderful character to play. Probably the most challenging in the film, I think anyone has been given or done. “

He added, “Govinda is in the film and your are going to see him as you have never seen him before. He is absolutely outstanding. And a great cast, great crew, and you have Muni Ratnam you know, so you expect something different and something memorable.” 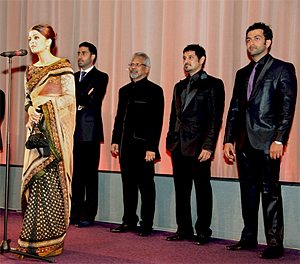 Following the excitement and action on the red carpet, the stars and leading crew members of the film took centre stage before the full house, to welcome guests and introduce the film. The celebrity event was followed by an after-party at exclusive eaterie and celebrity haunt, Oxo Tower Wharf, Waterloo, indulging guests with a bespoke menu of cocktails and canapés.

Drenched with atmosphere, emotion and gripping tension, ‘Raavan’ is a deeply intense, cinematic masterpiece that will draw audiences into the innermost depths of the human psyche to test their beliefs, convictions and emotions. The film wowed guests and audiences at the star-studded premiere, who left the venue spellbound.

‘Raavan’s’ hypnotising visuals by multi-award winning cinematographers Santosh Sivan and V. Manikandan are perfectly combined with a haunting soundtrack from multi award winning, A.R. Rahman. The lyrics have been penned by Indian poet, lyricist and script writer Gulzar, a five times National Award Winner and the recipient of 17 Filmfare Awards.

Check out our exclusive photo gallery of the Raavan premiere.