Akshay Kumar known for his non-fear of stunts, now plays the biggest sport in India – Cricket. However, he wants to play for England; in his forthcoming Bollywood film ‘Patiala House’ which is set in the UK.

"We wanted the matches to look authentic"

Akshay Kumar will be playing cricket in his next big film. His Bollywood movie, Patiala House, is set entirely in the UK, and will feature three of England’s top cricket grounds – the Oval and Lord’s in London and Trent Bridge in Nottingham. This will be the first Hindi film ever to be shot at these grounds.

The film revolves around a cross-generation conflict within an immigrant Punjabi family that lives in Patiala House in Southall. The son, Gattu (Akshay Kumar), wants to be a bowler for the England cricket team, while his family are completely unhappy about his choice.

Veteran actor, Rishi Kapoor, plays the father and reflects a cross generational story about a father-son relationship. Anushka Sharma, Dimple Kapadia and Dara Singh also star in this Bolly-entertainer that carries a strong social message. The movie also features the acting debut of female rapper, Hard Kaur. Patiala House is due for release around Diwali time in the Autumn of 2010.

Akshay Kumar’s friends who are professional cricketers coached him in the intricacies of bowling prior to the shoot. These included former Pakistani captain and fast bowler Wasim Akram. Akshay Kumar is a natural cricketer who has played matches at IIFA and bowls to his son, Aarav.

“How convincing I look is up to the audience to decide. But I have practiced a lot. I think I am a good enough bowler now to play on a national level.” 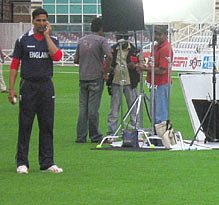 Bhushan Kumar, chairman of T-Series, is the joint producer with Mukesh Talreja of the 50 crore movie. He said, “we have two Test matches in the film,” and happy about the lack of red tape in England versus India added, “It wasn’t difficult getting permission to shoot in these legendary cricketing grounds. You don’t have to pull strings or go through the bureaucratic hurdles that you usually face when shooting in India. Filming in England is a cakewalk, it just takes time to get the permits in order.”

Nikhil Advani, the director of the film, wanted to cast the who’s who of the Indian cricket team, but the restrictions after the Indian Premier League fiasco have made this idea impossible to realise. There is news that Akshay Kumar, himself has spoke to MS Dhoni and Yuvraj Singh, but they told him they could not get permission from the BCCI. 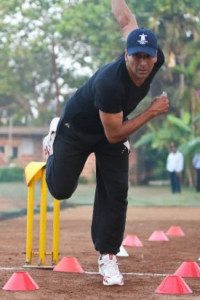 On signing the cricketers for the film, Nikhil Advani said, “We have got cricketers from across the world playing in one film without any scandal and prejudice.”

Bhushan Kumar added, “We wanted the matches to look authentic. People should feel that an actual cricket match is in progress, which is why we roped in so many cricketers.”

Whilst filming in Nottingham at Trent Bridge, Akshay impressed Aussie cricketer Andrew Symonds. In one scene, Andrew is at the crease and Akshay has to bowl to him. Andrew decided to give Akshay a bit of a leeway as he did not expect Akshay to be able to bowl. However, Akshay bowled very well and surprised Andrew with his cricketing ability. Akshay said, “We have been enjoying ourselves here.”

Baldev enjoys sports, reading and meeting people of interest. In between his social life he loves to write. He quotes Groucho Marx - "The two most engaging powers of an author are to make new things familiar, and familiar things new."
Bachchans at UK ‘Raavan’ premiere
Bollywood goes Twitter crazy!