Bollywood stars have adopted Twitter the social micro-blogging site in huge numbers. From young to old Bollywood icons; all of them are using it to communicate with their fans, who are following them by the hundreds of thousands.

More and more stars from the world of Bollywood; the big names in Indian cinema, are joining the Twitter social network. The ease of use and the ability to ‘tweet’ messages simply from mobile devices gives the stars a straightforward method of communicating with their fans directly, and fellow stars and friends.

DESIblitz has pulled together some of the top Bollywood tweeters on one special page for you to catch up on their latest tweets in one place! – the BollyTweets page.

Introduction to Twitter from fellow stars has encouraged many new Bollywood names to join the network. For example, Big B, Amitabh Bachchan, convinced Aamir Khan to join Twitter. Interestingly, Anil Kapoor gave Aamir a book about the micro-blogging site and about celebrities on Twitter and why they joined it. Bipasha Basu also joined the site soon after Aamir Khan and was welcomed by fellow stars. 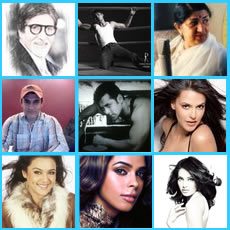 And there are many names from the Bollywood fraternity not even thought as people who would utilise Twitter as a communication tool, such as, Lata Mangeshkar, Asha Bhonsle (ashabhosle), Shatrughan Sinha (ShotgunShoots), Shabana Azmi (AzmiShabana), Mahesh Bhatt (MaheshNBhatt) and Shamii Kapoor (shamsheraj), as they are not commonly associated with on-line technology. But it’s a fact – they are tweeting regularly!

A staggering number of fans have become ‘followers’ of the stars, which has demonstrated how many people are eager to see messages from the Bollywood icons. Some big Bollywood names after joining Twitter, have found ‘followers’ have grown in thousands within days. The actors try to send replies to as many of their fans as possible but with so many followers it can be a time consuming task! But it can be said that Twitter finally, gives fans the chance to reach their stars without any barriers.

Whilst the micro-blogging site is proving to be one of the fastest growing communication mediums for Bollywood stars, Twitter does attract false identity problems. Something Hollywood stars suffer from too on the site. This is where people are posing on Twitter as a Bollywood film icon using the star’s name in the Twitter id and tweeting as if it is the star. A classic example of this is Preity Zinta, where a Twitter user with the id ‘preeti_zinta’ posed as the actress and the real actress tweeted:

Another id posing as her is realprietyzinta (note the placement of the ‘i’ and ‘e’). Other stars have had similar copycats doing the same thing using their name.

So, how can you tell the Twitter account is legit? Well, if you look at the Twitter profile of the person, you will see a ‘Verified Account’ with a white tick on a aqua blue shape. This means that the person has verified they are the real person associated with the Twitter account. Below you can see the example of Preity Zinta’s profile and the account verification stamp.

A very interesting trend on Twitter is that the Bollywood stars are posting their own photos and personal ‘snaps’ on their accounts.

This gives people a chance to see what they are up to and how they look in everyday life. Below are some photos found on the public Bollywood Twitter accounts as uploaded by the stars, in this case – Shahrukh Khan and Bipasha Basu.

The growth of Bollywood stars on Twitter is going to increase without doubt as more and more of the fraternity realise its ease of use and ability to stay in touch both with fans, friends, family and fellow actors and directors. So, if you want to find out what your favourite star is up to even on a daily basis – get tweeting!