As World Cup excitement reaches its peak, it seems everyone on Twitter is having a say. Bollywood stars Shahrukh Khan, Amitabh Bachchan and Shahid Kapoor have taken to the social media platform to share their thoughts.

The World Cup 2014 in Brazil has captured the hearts of football crazed fans from around the globe and it seems that Bollywood is no exception.

The film stars took to Twitter to share their excitement. Since the first whistle was blown, Bollywood stars have been tweeting about every single bit of drama and heartache.

Many Bollywood stars have been huge admirers of football for years. Shahrukh Khan is a big Manchester United fan whilst John Abraham supports London giants Arsenal. It came as no surprise as to why the superstars took to social media to show their support for the biggest tournament in world football. 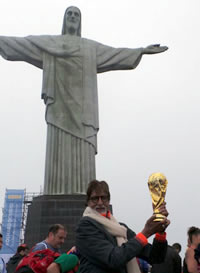 Amitabh Bachchan, who has 9.31 million followers on twitter, showed his support for the home team after their victory against Colombia in the quarter final, by posting: “BBBBRRRAAAAAAAAAZZZIIILLLLLLLLLLLLLLL !!!!! (need i say more ..).”

Amitabh, a huge Brazil fan, had shown his excitement leading up to the beginning of the World Cup tweeting: “FIFA opening! Been glued to Tv since long and shall see the first game too ..”

The Bhoothnath star did not seem impressed with their display in their record 7-1 defeat against Germany by tweeting: “Depressed beyond any remorse!! BLANK!!” Germany ended Brazil’s 64 game unbeaten home soil that stretched back 38 years.

Taking after his dad, Abhishek Bachchan looked as though he couldn’t hold in his emotion by tweeting: “UNBELIEVABLE!!!!!! David Luiz #BRAvCOL com on Brazil.”

The Dhoom star also showed his backing to Colombian maestro James Rodriguez by posting: “This is why you gotta love football. James Rodriguez, take a bow. Player of the tournament so far….”

Shahid Kapoor, who recently said on his down time kills time by watching football, has been constantly tweeting about every aspect of the world cup. The charming Bollywood actor tweeted about Holland’s chances posting: “Netherlands still looking like the best team in the tournament but today is going to be a huge test.”

Shahrukh Khan, a self-confessed sports addict, reacted to Germany’s 7-1 demolition of Brazil in the semi final by tweeting: “GER showed us the meaning of Blitzkrieg! A series of fast powerful attacks; 1ce in enemy territory, proceed 2 dislocate them using speed & s’prise.”

SRK obviously has a keen eye for the tournament previously tweeting: “Germany will most probably go all the way & win the world cup.” Looks like the King of Bollywood could be the King of predictions after Germany cemented their place in the final.

Boman Irani was also shocked by the semi final result. He recently posted:

“I must have muttered it to myself 1000 times in the last 30 mins, now tweeting it once: I just can’t believe it!”

Boman had tweeted his opinion on Brazil’s performance earlier on in the tournament tweeting: “Brazil through, but not the well oiled machine one has known them to be. Next match Thiago won’t play and fred can’t!!!”

John Abraham, who has just been confirmed to star alongside Aishwarya Rai in Jazba, also got in on the twitter action. He expressed his excitement at the start of the tournament by posting: “Time to grab your favourite jersey, football biggest party starts tonight. #WorldCup is here!” 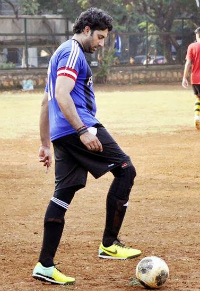 Actor Rahul Bose, a keen sports fan himself and amateur rugby player, was in shock after Brazil’s semi final 7-1 defeat to Germany. The Bollywood screenwriter tweeted: “This was carnage. A defeat without Silva and Neymar was expected, but carnage? #BRAvGER.”

The magic of the World Cup has taken over social media and it seems to have taken over Bollywood as well. With a record amount of tweets being sent out over this tournament, it has demonstrated the power and popularity of twitter in all corners of the globe.

It is scary to think the reaction Bollywood would conjure up if India’s national football team made it to the final stages of the world biggest football tournament.

Incredibly Amitabh Bachchan has flown to Brazil to take in all the World Cup action. He was pictured in front of the statue of Christ the Redeemer in Rio holding a World Cup trophy.

With one match left, the FIFA World Cup Final on 13th July is predicted to be the most tweeted sports event in history. And there is no doubt that Bollywood will have their say.

Tom, currently studying Marketing in Sheffield, has a passion about all things sport. He also enjoys playing music and listening to a great band. His motto is: “Life’s too short, have some fun!”
India withdraws 2019 Asian Games Bid
Germany wins 2014 FIFA World Cup Brazil