Akshay Kumar the Bollwood actor who thrives on martial arts held his International Invitational Karate-do Championship 2011 in Mumbai, India. This is the second year of the tournament and Akshay wants it to be bigger every year with the sport being on par with cricket one day.

"Karate is also about self discipline"

International Khiladi aka Akshay Kumar who is known for performing breathtaking action scenes in his film has once again successfully hosted, the much awaited event for Karate enthusiasts Akshay Kumar International Invitational Karate-do Championship 2011, which was held at Andheri Sports Complex in Mumbai between 19th-22nd October 2011. As compared to the last two years, it was much bigger and even better!

Mithun Chakraborthy and Ritesh Deshmukh were present at Akshay’s International Karate Championship in Mumbai supporting his cause to make karate a key sport in India.

Akshay says that his Bollywood career is indebted to karate. He says: “Karate is also about self discipline and it’s not just karate. It is any form of martial art.”

Akshay wants karate to become more famous in the country as people don’t consider it as entertaining as sports like cricket. He will continue to support and sponsor the sport until more people begin to support it. 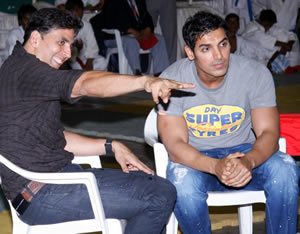 Akshay Kumar himself was present to support the kids, his good friend John Abraham too dropped by to see the kids practice their martial arts.

Akshay tweeted: “Wanna thank John for coming to cheer on my hardworking NINJAS, they really appreciated ur support man :).”

The categories for this year championship with a one lakh award for each were:

The last day of the tournament was adorned by special guests of our superhero Akshay Kumar, acclaimed Bollywood personalities 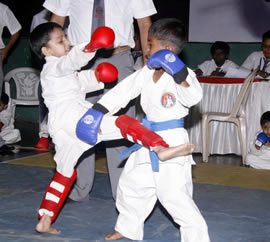 Ritesh deshmukh and Mithun Da! Akshay even posted an image from the event on Twitter and wrote: “Here’s a picture from last night with Mithun Dada & Riteish at my International Karate-do Championship!”

The sporty side of Akshay Kumar is never too far away from the surface! We all know how passionate this Desi Superman is about sports and fitness. Akshay Kumar himself funded the event on his own this time, shelling out approximately Rs 2 crore, significantly more than what he’s previously invested in the event!

The idea of this championship is to encourage the fighting arts and sports among Indian youth. Akshay has always been passionate about Karate and is especially considerate about the fact that there is so much talent in the country that needs to be nurtured. He was particularly moved by the plight of some really talented athletes who could reach the highest level if given an opportunity but haven’t been able to do so because of lack of funds. 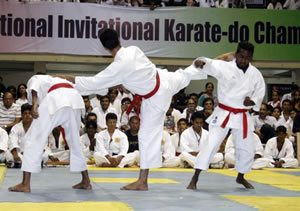 With this championship, he wishes to create a platform where young and budding talent from all over India would get together and get into a world class fighting event. This event will also promote Karate and Martial Arts to the remotest corners of the country. 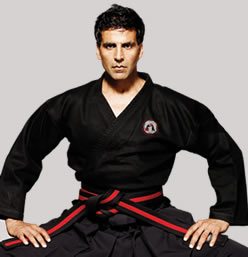 Mehul says: “Traditional combat karate is known for its full-contact technique. The fighters use fast-paced high kicking and speed punching techniques to strike at vulnerable points on their opponent’s body. Since no rules are followed, it is akin to street fighting.”

“We wanted to introduce this long ago. Akshay is very passionate about the sport and believes that its introduction will only take the Championship to a greater height.”

The traditional combat courses will range from two months to five years and have a similar process of learning like karate, but the format in which fights are conducted will be different. “Akshay, as usual, will share his experiences, give tips and check on students regularly. His son is also a green belt karate champion.”

As testament to the academy’s prowess, last year’s winners from the Akshay Kumar Karate Championship recently won one gold and three bronze medals in Malaysia at the 12th World Karate Championship. So, the stage is set for the actor’s dream to get bigger and better every year.

Baldev enjoys sports, reading and meeting people of interest. In between his social life he loves to write. He quotes Groucho Marx - "The two most engaging powers of an author are to make new things familiar, and familiar things new."
Vettel wins India Formula One
Pakistani Cricketers Jailed for Fixing Scam