Cricketing history was made on 3rd November 2011 but not for positive reasons but for the sad outcome of legal proceedings against three Pakistani cricket players and an British born agent which resulted in prison sentences for spot-fixing games during a Lords Test in August 2010 against England.

"You Butt, Asif and Amir have let down all your supporters"

Pakistani cricketers Salman Butt, Mohammad Asif amd Mohammad Aamer (Amir) were jailed along with agent Mazhar Majeed on Thursday 3rd November 2011 at London’s Southwark Crown Court for their participation in a Test match-fixing racket that blew up during Pakistan’s tour of England in August 2010.

The Pakistani players were accused and charged of spot fixing parts of the Test match between England and Pakistan in August 2010 which was splashed over the media by the News Of The World (NOTW) newspaper. The trial and sentencing were closely watched in Pakistan, where cricket is a hugely popular sport. 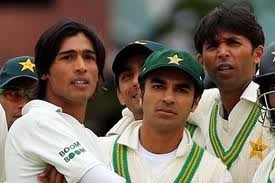 British judge, Jeremy Cooke, sentenced the men after a trial that looked at the evidence finding the players guilty of crimes committed playing the game of cricket representing their nation.

The Pakistan team’s ex-captain, Salman Butt was imprisoned for 30 months, Mohammad Asif who at the time was ranked as the second best test bowler in the world, for 12 months, and 19-year old bowler Mohammad Aamer, who had pleaded guilty to involvement in the scam to pre-arrange no-balls for corrupt South Asian betting rings, was sentenced to six months 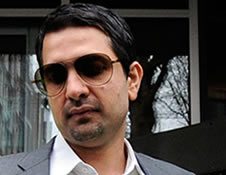 British born agent Mazhar Majeed, 36, who was the brains behind the scam with co-operation from Salman Butt also pleaded guilty to the offences but had denied he had initiated the scam, was given the toughest sentence of two years and eight months.

All the men listened to the judgements passed down to them and speech from Mr Justice Cooke in a sombre mood.

Cooke said: “These offences, regardless of pleas, are so serious that only a sentence of imprisonment will suffice to mark the nature of the crimes.”

Talking about the sentences, Mr Justice Cooke said: “Each of you will serve half the time imposed in custody and then you will be released on licence.”

The judge said to Butt: “It is clear to me that you were the orchestrator of this activity, as you had to be, asCaptain, in arranging for these bowlers to be bowling the overs which wereidentified in advance to Majeed and which he identified to the NOTW journalist”

Aamer, the left-arm paceman became the youngest bowler in Test history to take 50 wickets but not withstanding the temptation of huge sums of money was found guilty of bowling two of the three no-balls in question during the fourth Test at Lords on August 26th 2010. Asif was accused of bowling one no-ball on instruction of the scam.

The judgement has been a very sad day for Pakistani cricket and was witnessed by a jam packed court room with intense media attention around this dramatic case from all over the world and in particular, Pakistan, where cricket is the most loved sport.

The judge said the three players were motivated by greed despite the large amounts of money they could earn legitimately, and said he hoped the tough sentences would deter future cricketers from following their example.

The guilty players and the whole court room listened to Mr Justice Cooke talk about the impact and damage caused by this case on Pakistani cricket, saying:

“In Pakistan, where cricket is the national sport, the ordinary follower of thenational team feels betrayed by your activities, as do your fellow countrymen in this country.”

“You Butt, Asif and Amir have let down all your supporters and all followers of the game, whether suborned by you, Majeed, or more than willing co-conspirators,” he said.

In addition to the sentences, the International Cricket Council (ICC) has banned Butt for ten years, with five suspended, Asif for seven years, with two suspended, and Aamer for five years straight.

Reaction to the sentences has been huge in Pakistan and around the cricketing world. The media, families and Pakistani Cricket Board (PCB) have all commented on the outcomes. 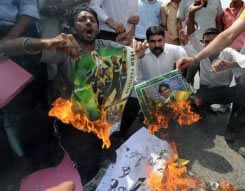 Fans and everyday people of Pakistani cricket are raged by the humiliation brought on the country and game by the players. Posters of the players were burnt in public protests on streets.

Spokesman for the PCB, Nadeem Sarwar said: “PCB is determined to ensure that any form of corrupt behaviour from Pakistan cricket is stamped out.”

The PCB said it has taken serious measures to prevent future misconduct and that “more would follow” as and when the need arises. “Ridding Pakistan cricket of any possible corrupt behaviour will remain a high priority,” it said.

Imran Khan, Pakistan’s former captain said: “I think what is most important is that our cricket system needs to be radically changed. Only then will we be able to rid ourselves of corruption in cricket.”

Ex-England Cricketer Sir Ian Botham said: “I never thought I would live to see this day. Never. I cannot think this is happening to our game.” 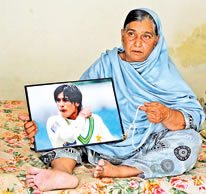 Mohammad Aamer’s mother, Naseem Akhtar, cannot believe her son has been jailed and says that he is very naive and was ‘forced’ to go along with it all. His friends and family say the sudden transition from poverty to the riches of international stardom and cricket got the worse of him.

Salman Butt’s father Zulfikar Ali Butt, who runs a farming business made a stark statement to the media saying: “If Salman’s involvement is proved and evidence is provided that he took money, I tell the nation that my son Salman and I are ready to be hanged publicly.”

Below is the full transcript of the sentencing remarks of Mr Justice Cooke in court for this case.

The lawyers for Butt and Aamer said they intend to appeal against the sentences. Butt, Asif and Majeed are expected to begin their sentences at Wandsworth Prison in South London, whilst Aamer will be sent to Feltham Young Offenders’ Institute in West London.

This history making case has brought to the surface the corruption and scandalous deals that take place behind the scenes to tarnish sport like cricket which is watched and praised by millions of fans innocently. Therefore, the sentences passed are applauded and definitely a move in the right direction to clean up this much adored sport.

What do you think of the sentences given to Butt, Asif and Amir?

Baldev enjoys sports, reading and meeting people of interest. In between his social life he loves to write. He quotes Groucho Marx - "The two most engaging powers of an author are to make new things familiar, and familiar things new."
Akshay Kumar’s Karate-do a Hit
Amir Khan loses to Lamont Peterson