The first ever F1 grand prix in India witnessed a tremendous win by Sebastian Vettel. The race featured entries from Indian team Force 1 India and the only Indian driver in F1, N Karthikeyan. A major new sporting event in India.

"I am very proud to be the first winner."

History was made in India when it hosted its first ever Formula One (F1) race. The capital city of India, Delhi, was the host on 30th October 2011 to this incredible race which was full of excitement, action and above all speed on the new Buddh circuit.

The engine sounds echoed around the track as the racing teams competed with a stadium packed with Indian F1 fans, celebrities, ministers and Bollywood stars. With the cars touching over 300 kmph on the new track’s long straights, it was a high ecstasy for fans who experienced for the grand prix for the first time in person and cheered loudly for their favourite teams.

Force India had Paul Di Resta (from Scotland) in their car featuring the orange, green and white colours and HRT featured the only Indian driver in the race, N Karthikeyan, for whom this was an historic race to race in his own country. “It’s a historic day to be an Indian driving at the Indian GP. But realistically, we are just hoping that both the cars manage to finish the race. However, the first few laps are going to be really special for me. There are many fans in India who are excited about the race,” said Karthikeyan.

The big names in F1 were all in their cars competing for the coveted first place. Including Louis Hamilton raced for McLaren, Vettel for Red Bull Racing, Fernando Alonso for Ferrari, Michael Schumacher for Mercedes, Jenson Button for McLaren and Bruno Senna for Renault.

The results of the first Indian F1 race were: 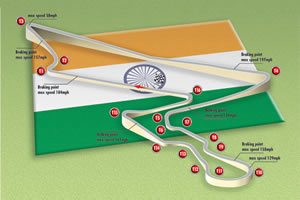 The first Indian grand prix race got on its way with screaming engines of the cars all trying to make early head way. The known F1 names headed towards the first three positions early in the race. Vettel, Button, Alonso and Webber all speeding as lap front runners on the totally newly built circuit in Delhi, India.

Kamui Kobayashi racing for Sauber F1 was hit very early in the race forcing him out the race.

In lap 24, Louis Hamilton collided with Massa forcing him into the pit and instigated an investigation. Lap 34 let to Massa’s front left wheel hit a kerb and meant him coming out of the race, Hamilton dropped into 7th position and the only Indian racer, Karthikeyan, moved up to 16th position. 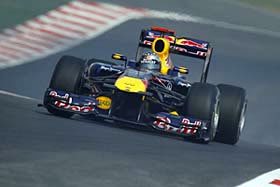 There was a battle for third place during the 37th lap when Webber (Red Bull Racing) had to have a pit stop for tyre change and Alonso moved up a place from fourth. Vettel was still ahead comfortably in pole position.

By the 52nd lap, Schumacher was in fifth position, Webber was fourth, Alonso third, Button second and Vettel well in the lead by 3.6 seconds.

Racers out of the race by the 53rd lap were Massa (Ferrari), Glock (Virgin), Buemi (Toro Rosso), Maldonado (Williams) and Kobayashi (Sauber).

The final 60th lap of the first Indian F1 race was led by Vettel in the lead, followed by Jenson Button in second place and Alonso in third.

Louis Hamilton finished in a disappointing 7th place despite his collision with F Massa. Hamilton said: “I was pushing as hard as I could but could not have the pace as anyone.” Talking about India’s hospitality, Hamilton added:

“The Indians did a fantastic job this week. The track was fantastic and we were treated like kings.” 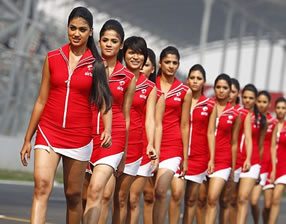 Cricketer extraordinaire, Sachin Tendulkar, had the honour to wave the flag at the finishing line for the first Indian F1 race when Sebastian Vettel won the race in first position, breaking his record. Vettel shouted from his car radio: “Yes! We did it! Intresting challenge!”

After the race, Sebastian Vettel winning 11th victory of the season said: “I enjoyed the timing in the lead very much.” Talking about the car and win he said: “The car was very well balanced and overall a fantastic performance. It is the first grand prix in India. I am very proud to be the first winner.”

The only Indian driver, Karthikeyan, finished in 18th position for HRT. After the race he said: “It’s a big success for us. Motor sport is very big in now in India.”

Celebrations were wild at the end of the race with people cheering, shouting, dancing in the stadium and F1 flags waving. India received praise for its first F1 race. Everyone attending, participating and watching all enjoyed the race.

Bernie Ecclestone was very pleased with the race and ahead of it said: “F1 is as popular in India as cricket in France, but things will improve drastically in the years to come. The media coverage has been overwhelming and people here want to know more about the sport.”

Baldev enjoys sports, reading and meeting people of interest. In between his social life he loves to write. He quotes Groucho Marx - "The two most engaging powers of an author are to make new things familiar, and familiar things new."
India revs up for first Formula One
Akshay Kumar’s Karate-do a Hit