Formula 1 is often hosted by beautiful circuits around the world, but how are tracks in Asia different? DESIblitz explores the top F1 tracks in Asia.

Baku’s circuit is considered to be F1’s fastest street track.

Formula 1 is hosted by some of the most beautiful F1 tracks around the world.

The first Middle Eastern track to host an Formula 1 race was Bahrain. This is now just one of the number of circuits hosting races, as F1’s popularity over Asia continues to rise to new heights.

The beauty and galore of some of Asia’s finest Formula 1 tracks is best seen in person. But if anyone is wondering where to go, or is planning a trip to any of these places, then an F1 circuit is a place you must visit during your travels. 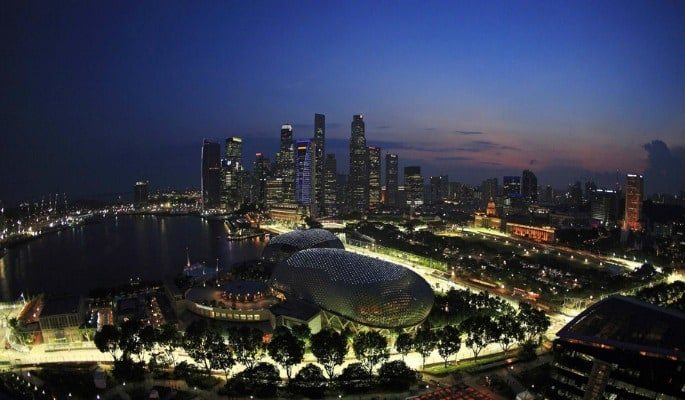 The stunning Marina Bay Circuit is the first official night race to be held in F1. With floodlights being used to create an auroral visual display, this is one of the F1 tracks that is a sight to behold.

The track first hosted a grand prix in 1973 for Formula Libre, but after many accidents (some fatal) it was discontinued.

The track uses two bridges across the harbour, and cars go past the famous Padang Park and permanent pits complex alongside the Singapore Flyer.

However, whilst the view on track is luminous, and visibility is definitely not an issue, the track still presents a challenge for drivers.

Firstly, there is the humidity of the track, which can reach up to staggering heights. It may be a night race, but the humidity levels exceed 80% whilst ambient temperature stays around 30 degrees Celsius. 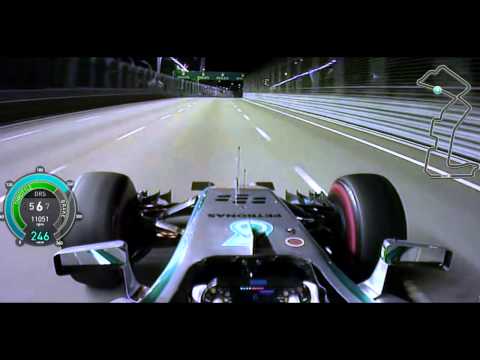 Red Bull driver Daniel Ricciardo described the severity of the heat by saying: “It’s the only race of the season where you crack open your visor to let in some cool air and instantly wish you hadn’t because it’s hotter outside.”

On top of the heat is the time of the race, with Singapore being named the longest race of the season, spanning to almost two hours.

Drivers are also expected to stick to European times for the race weekend as the race is at night and staying alert is exceptionally crucial to the race.

The Marina Bay circuit is in Ricciardo’s words, “the most physical challenge of the year”, and one of these reasons is the painstaking amount of corners. With 23 corners on track, heavy braking is often required, with 81,435kg of braking force used for the entire race. 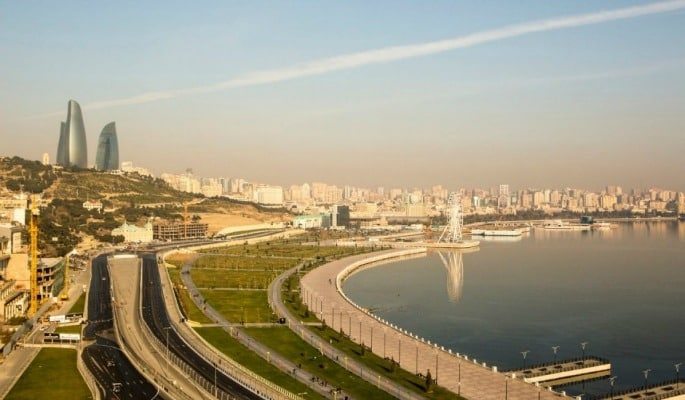 This enamouring track has only been on the calendar for two years. The second longest track on the calendar going just shy of 6km, the Baku circuit has the captivating Caspian Sea Promenade and the historically magnificent Icheri Sheher along the way.

With 51 laps to go, this is the only one of the Formula 1 tracks that is anti-clockwise. It was designed by non-other than renowned F1 architect Hermann Tilke.

Everywhere the driver turns on this track he is met with quaint sights. Along the 1500km straight is the Government House, and the greenery of Sahil Garden just after the 90-degree turn before the third straight.

After turn 6 comes the most appealing sights with the promenade coming into view, and the old historic town Icheri Sheher.

Driver’s race alongside the walls here, which makes it extremely exciting but also difficult for drivers to overtake.

After the 15th corner, the National Academy of Science comes into view and on towards the Azerbaijan State Philharmonic Hall, then the rest of the Caspian coastline glitters as the driver’s race past. 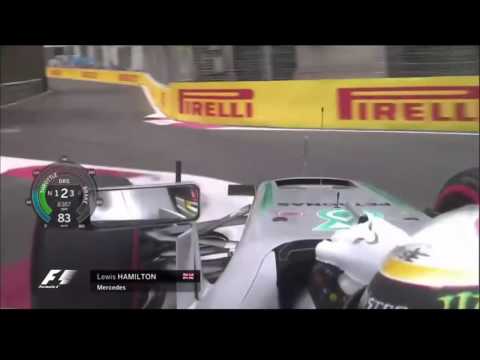 Even F1 driver Sergio Perez appreciated the picturesque track, he told AzerNews: “I loved Baku, the city – the old part, the new part, the contrasts. It was one of the best cities I have visited in my life.”

Baku’s circuit is considered to be F1’s fastest street track. Street tracks are usually more challenging and drivers have to brake hard enough to make the corners but pick up speed as soon as the turn is taken. 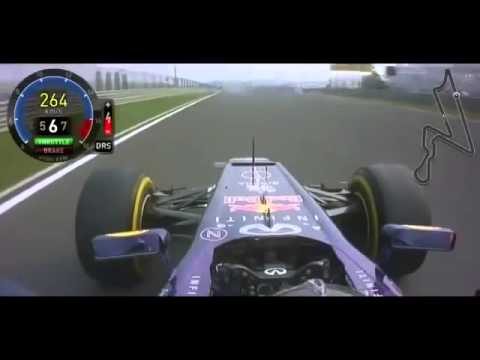 The majestic Buddh International Circuit was held in Uttar Pradesh for the first time in 2011. It is part of the Jaypree Greens sports city which holds 60 laps over 5.125km length.

Designed again by favourite F1 architect Tilke, it pushes the speed to the max and is great for overtaking with the wide corners.

Unfortunately, the F1 Tracks are an Asian race down as fans of the Indian GP have only witnessed 3 races since the race was cancelled due to disputes between F1 and the circuit.

F1 Asian Tracks usually have a very warm climate. This makes the race a challenge for the drivers in the cockpit. Buddh contains 16 corners and has many straights which encourage a lot of straight speed racing.

Romain Grosjean described it by saying:

“The layout includes a nice mix of corners with a bit of gradient change which is always a good thing. There are some decent straights with wide corners at the end of them to help with overtaking, although it’s still not the easiest place in the world to pass somebody… It’s quite a fun track to drive.”

The Buddh track can get dirty though, but this doesn’t take away the beauty of the track. 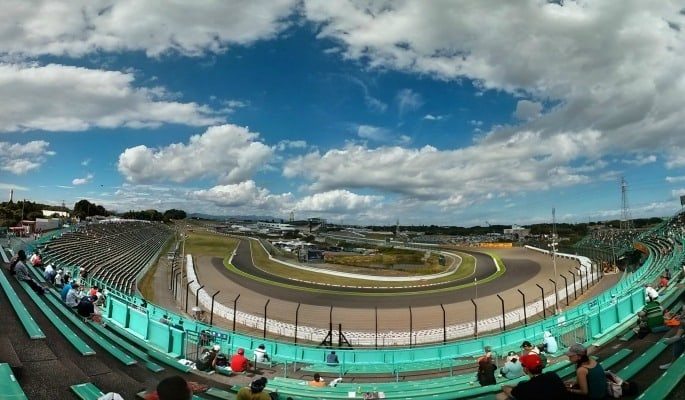 F1 drivers all love this fast, demanding track for its high-speed corners and famous spoon curve.

Out of all the F1 Asian Tracks, what makes this a race to attend, is the sheer enthusiasm and excitement of the fans here in Suzuka. Nico Hulkenberg described it as:

“They are incredible: it doesn’t matter what time of day it is, or what the weather is doing, they are there outside the hotel or at the track waiting for you. It’s great to see their passion and knowledge for our sport. They always bring us presents – most often candy, but I once got a very cute teddy koala bear!”

Built by Honda as a racing test facility in 1962, and designed by John Hugenholtz, this is the ultimate challenge for all F1 drivers. Honda eventually lost their facility to GP racing in 1987, when the first race was held.

Track sights are invigorating with a theme park built on around the track and the famous big wheel skyline captivating the eyes of enthused Formula 1 fans.

The track has a figure of 8 layout and is a facility park with everything to do. Besides the Motopia theme park, there is the Kur garden hot springs, golf courses, gyms, hotels and even tennis courts. Suzuka has it all.

Reaction from drivers to this track says it all. Jenson Button had this to say:

“The Suzuka circuit is incredible – almost in a class of its own on the calendar.”

There are 5 notable curves in this crossover track. These include, the Dunlop Curve, the Spoon Curve, the Dagmer Curve, the hairpin, the 130R and the Casio Triangle.

The 130R is beyond fast and proves to be exciting to race and watch. However, the track has proved to be dangerous in the past. Below, Nico Rosberg’s pole position lap in 2015 at Suzuka: 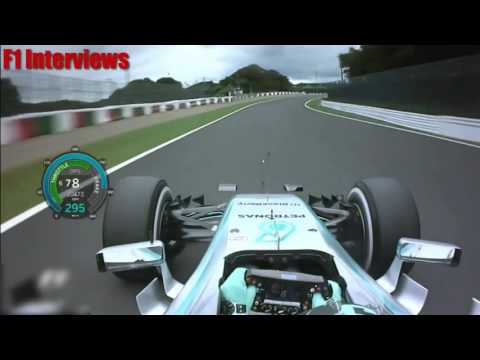 Late F1 driver Jules Bianchi crashed in Suzuka in 2014 and died 9 months later of brain injury. This was the first fatal accident in F1 since Ayrton Senna.

But it is the fans that come to this track that give it an experience not to forget as Sergio Perez said:

“Some are very loyal: there’s one Japanese fan, who always waits for me when I am leaving the track or leaving the hotel, and I always make sure I stop for a photo.” 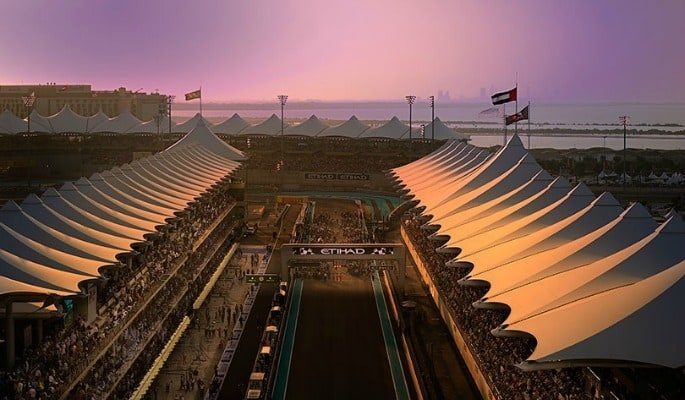 Finally, we come to the more vividly entertaining than any other of the Formula 1 tracks on the planet! Abu Dhabi.

There’s good reason why this track is usually the title decider, as the beautiful Yas Marina Circuit first held a grand prix in 2009 and spans over 5.554km over 55 laps.

Located on YAS Island, 5-star hotels glitter around it, with Ferrari World dominating the skyline. Yas Marina is the most expensive F1 track ever built, and it does not disappoint.

The cars run under the YAS Viceroy Hotel and 60-metre sun tower between turns 18 and 19, making this a breath-taking structured circuit. 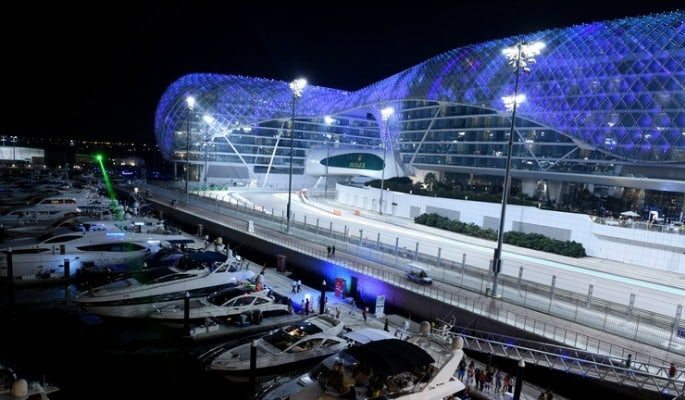 Considered more of a slow circuit, the hairpin (Turn 7) is the slowest part of the track.

Jenson Button confirmed the slowness of the track, saying: “Yas Marina is a pretty technical race track, with a relatively low average speed thanks to the tight corners in the final sector, which gives it many of the characteristics of a street circuit.

That completes the list of some of the most amazing Asian and Middle Eastern F1 Tracks on the calendar. Although, the Buddh circuit is the only track on the list to not be hosting F1 anymore. However, the track is still used for other motorsports events.

The Formula 1 world has a lot to thank for the tracks in Asia. They are centrally more challenging and different than the European tracks. If anyone is visiting the East, a visit to an F1 track will provide the best views.