"We bowled very well and after that the batting was good too."

Pakistan thrashed England by 8 wickets in the first semi-final of the ICC Champions Trophy cricket tournament.

England were outplayed by Pakistan in all departments at Sophia Gardens in Cardiff on 14 June 2017. The Green Falcons managed to overcome the English roar quite easily.

The unbeaten England side went into the match as big favourites. But the unpredictable Men in Green had other things on their mind.

Pakistan were unrecognisable, having beaten South Africa and Sri Lanka in their last two group games.

It was a splendid day in Cardiff, with the sunshine in full motion.

In the presence of Match Referee Andy Pycroft (Zimbabwe), England captain Eoin Morgan threw the coin. Hoping to bowl first, Pakistan got their wish after winning the toss.

England left out Jason Roy as Jonny Bairstow came into the side as his replacement.

As Mohammed Amir had to drop out of the playing XI in the morning due to a back spasm, left handed medium pacer Rumman Raees made his One Day International debut.

Umpires Marais Erasmus (South Africa) and Rod Tucker (Australia) led both set of players onto the field in good conditions.

Following the national anthems and a few fireworks the match got started.

After some nervy moments Alex Hales (13) hit straight to cover where Babar Azam took an easy catch off debutant Raees.

Joe Root (46) made a start, but found skipper Sarfraz Ahmed behind the stumps off a quicker delivery from Shadab.

Morgan lost patience to depart for 33 as wicketkeeper Sarfraz grabbed the inside edge off Hasan.

Sarfraz claimed his third catch when Jos Butler (4) feathered the ball off Junaid Khan to leave England reeling on 148-5. 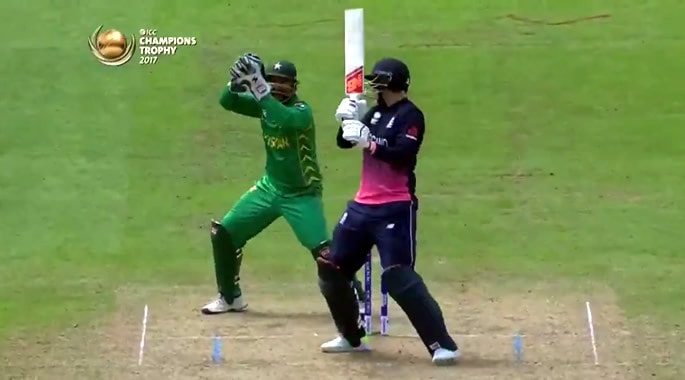 Moeen Ali (11) hit two boundaries, before Fakhar Zaman took a stunning catch of his at backward square off Junaid.

Adil Rashid then run himself out for 7, after a beautiful in-swinging yorker from Hasan.

An out of sorts Stokes (33), did not pick the slower delivery from Hasan as he hit the ball up in the air to find Hafeez at mid-off. Stokes did not score a single boundary in his innings.

Plunkett (9) caught at deep square leg by Azhar off Raees and Mark Wood (2) run out fell cheaply as England were all out for 211 with 1 ball to spare.

What a lethal spell from the Pakistan bowlers! While Hasan Ali was pick of the bowlers with 3-35, Junaid and Raees took two wickets a piece.

With England defending a very low total, Pakistan knew they had to build a good opening partnership to avoid any wobbles later on.

As expected Azhar was a little cautious, whereas Zaman did not hold back, smashing the ball everywhere.

Fakhar reached his second consecutive half century with a single in the 17th over. His fifty included six 4s and one 6.

Gaining more confidence, Azhar completed his second fifty of the tournament in the 21st over.

Pakistan are on their way to the final of the Champions Trophy! ?? #CT17

Misreading Rashid’s googly, Zaman was eventually stumped out for 57, ending a first wicket partnership of 118.  The fine young Azam came to the crease with less pressure on his shoulders.

With only thirty-nine runs required, Azam and Hafeez saw the Green Brigade home by 8 wickets in the 38th over.

During the presentation, speaking of the loss, a disappointed Morgan said:

“One thing we didn’t do was adapt to conditions, coming from Edgbaston to a used wicket, Pakistan did that well and played better.”

Sarfraz in a jubilant mood highlighted the performance saying:

“We bowled very well and after that the batting was good too. Mohammad Amir wasn’t playing but Raees came in and did well.”

“We adapted to conditions. We knew if we restrict them we could easily chase it down. Every game is a knockout game and I told my boys to play their game and not worry about the result.”

Commenting on this crucial game and crediting the bowling coach, the amazing player of the match Hasan Ali told the media:

“It’s a big match, so we focused on our bowling. My coach Azhar Mahmood helped me a lot, he gave me the plan and I implemented it. [Prize wicket?] Morgan.”

Hasan is on course to receive the Golden Ball Award, leading the pack with 10 wickets

All in all it was a convincing triumph for Pakistan. They were on top in all facets of the game – be it bowling, batting or fielding.

Many critics and fans did not give Pakistan a chance. But defying all odds, the lowest ranked and weakest team in the competition comprehensively crushed the best side out of the tournament.

England will now wait for the 2019 Cricket World Cup to try and win their first fifty overs ICC event.

Cardiff has proven to be a lucky ground for the Green Shirts, defeating England also in 2016.

Pakistan has all the momentum and is the team to beat, especially at their favourite Oval ground. Pakistan will participate in their first ICC Champions Trophy cricket final on 18 June 2017.