"It was a team effort. Coach gave me a plan, and I just stuck to that."

Medium-Fast bowler Hasan Ali took 3-24 as Pakistan sealed a 19 runs victory against South Africa in the Group B match of the 2017 ICC Champions Trophy .

Taking place at the Edgbaston Cricket Stadium in Birmingham on June, 07th, the match had to be cut short due to rain. Pakistan won the One-Day International (ODI) game, courtesy of the Duckworth Lewis (D/L) method.

Pakistan not at their very best against India went into this game approaching to attack like a falcon. Before the start of the match, Shoaib Malik handed a green cap to debutant Fakhar Zaman from Mardan.

Similar to British temperatures, it is difficult to predict the Pakistan team. But thankfully they hit bat to the leather and did not feel cold in the weather.

On a bright afternoon, South Africa won the toss and chose to bat first. There were no changes for the South African side. The Men in Green made two adjustments, bringing Zaman and Junaid Khan in place of Ahmed Shehzad and Wahab Riaz.

Both teams came onto the ground, as everyone stood up for the national anthems before the game began. 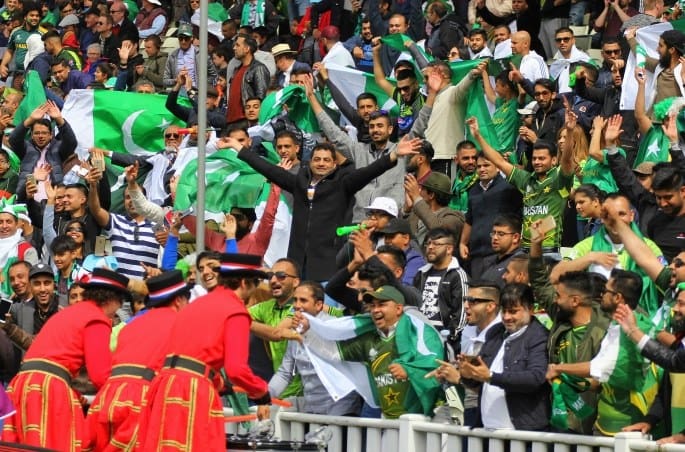 With about 18,500 spectators inside the stadium, the atmosphere was simply fantastic. It felt like a home game for Pakistan, with so many of their supporters at the game.

Richard Illingworth (England) standing in his 53rd ODI and Sundaram Ravi (India) officiating for the 30th time in 5o overs cricket were the two on-field umpires. Kumar Dharmasena was the third official, acting as the TV umpire.

The match took place on the same pitch as the India versus Pakistan game. However, with rain coming down over the last week, the outfield was a touch on the slower side. 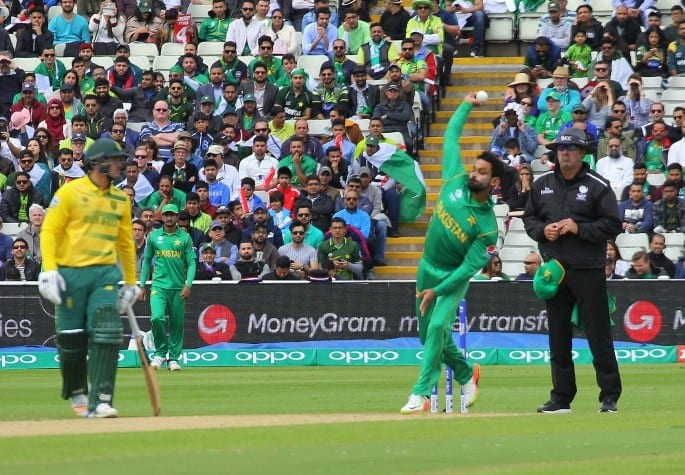 The ball nipped back in for the Pakistan pacers Mohammed Amir and Junaid at the start. Thus South Africa’s opening batsmen could not let loose early on.

The Pakistan team were also on target and good in the field, adding more pressure on the Proteas.

Umpire Ravi had no hesitation in giving Hashim Amla lbw for 16 off spinner Imad Wasim.

Despite the Green Shirts missing a review on Quinton de Kock, he was gone lbw for 33 off Hafeez. Wanting to accelerate, for Quinton it was a case of losing patience. 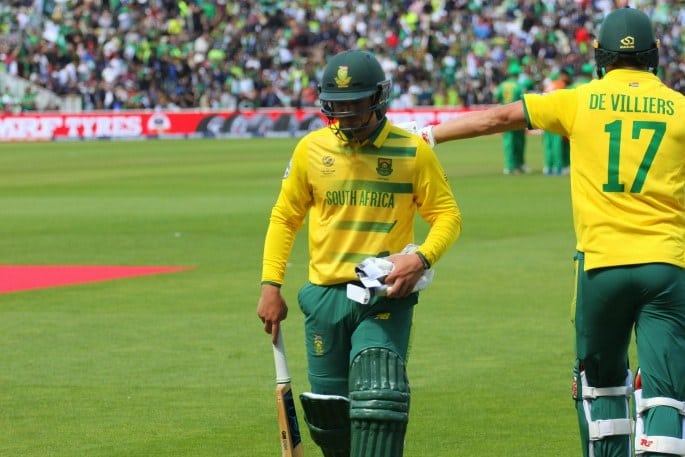 South Africa went from 40-1 to 61-3, following the dismissal of AB. Faf du Plessis and David Miller did try to rebuild, but were unable to develop a substantial partnership.

Faf (26) was next to go, getting an inside edge, which hit middle stump off Hasan Ali.

Hasan then got two consecutive wickets in the 29th over, proving to be a game changer. He first got rid off JP Duminy (8), brilliantly caught low by Babar Azam at first slip.

Next he clean bowled Wayne Parnell (0) with a pure jaffer, which angled in to dislodge his off stump.

Chris Morris and Kagiso Rabada did show some resistance, before heading back to the pavilion.

Hasan at long on safely caught Morris off Junaid after making 26 runs. Hasan then took a superb swerving catch at deep cover to dismiss Ramada (28) off the same bowler.

Whilst wickets were tumbling at the other end, the methodical Miller kept going on. He remained unbeaten on 75 off 104 balls as South Africa reached a below par 219 in their 50 overs.

Pakistan bowled beautifully with purpose throughout, There was a lot of swing and lateral movement for their fast bowlers. The pacers did receive terrific support from the spin contingent of Wasim, Hafeez and Shadab. 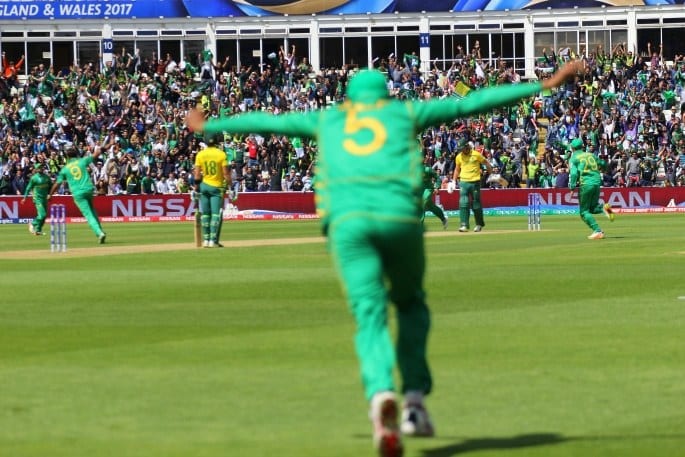 Rabada, the number one ODI bowler in the world opened the bowling alongside Parnell. Zaman on debut got Pakistan off to a flyer.

With Parnell giving Zaman width, he hit some wonderful shots, particularly on the off side. At the other end, anchorman Azhar Ali was prodding along in his usual manner.

Just when Pakistan were looking good, Morne Morkel struck twice in the 8th over. The flamboyanesque Zaman (31) got caught at first slip by Amla off a slower delivery from Morkel.

Two balls later, a poor guiding shot from the bogged down Azhar (9) found Imran Tahir at third man off Morkel.

Hafeez and Azam then built some momentum with a 50 runs partnership to give Pakistan a slight edge. Hafeez eventually went for 26, as Tahir held onto a catch at fine leg off Morkel once again. 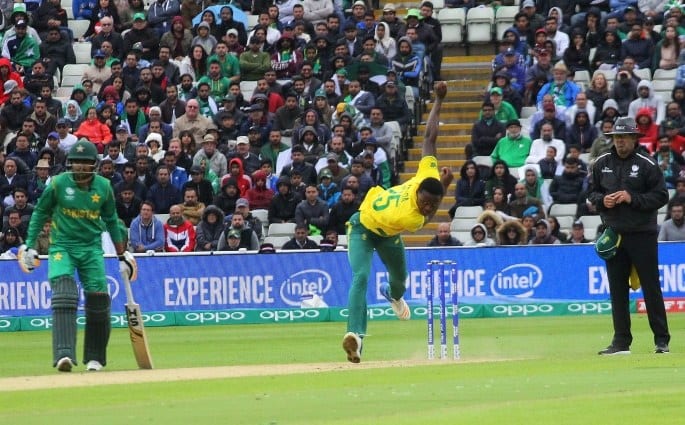 Then the calm Shoaib came to the crease, hitting 3 glorious boundaries, two successive off Rabada.

Pakistan at 119-3 were looking in a healthy position at the end of the 27th over, but the drizzly rain became more heavier as the players left the field

With the rain persisting for over an hour, the match had to be called off at 9:40 pm. As 20 overs constitute a match, Pakistan were ahead of the D/L par score and as a result won the match by 19 runs. 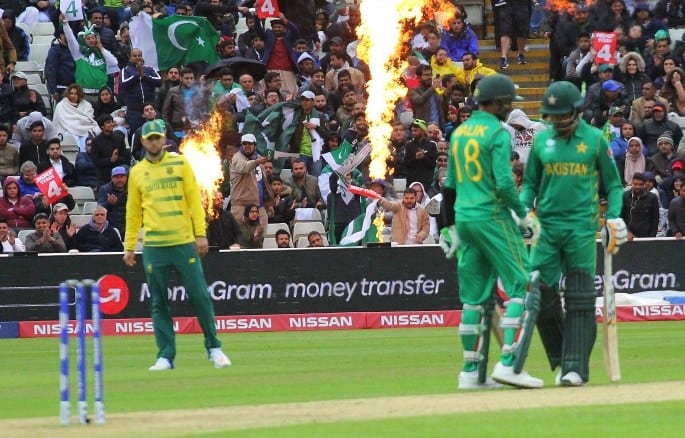 Unfortunately South Africa did not get a chance to pull chestnuts out of the fire.

Speaking about the significance of the win, Pakistan skipper Sarfaraz Ahmed said:”It’s a very important win for us. Credit goes to our bowlers and fielders. We were good in all departments today.”

“They bowled pretty well, put us under pressure. We lost some wickets, which wasn’t a great response for us, but we recovered well thanks to David and a few other guys who put up partnerships.

“We fought really well on the field, got into a very good position. Whether it was par score or not doesn’t matter. It’s a difficult situation, you never know what to do.”

Commenting on their performance, Hasan Ali said: “It was a team effort. Coach gave me a plan, and I just stuck to that.” 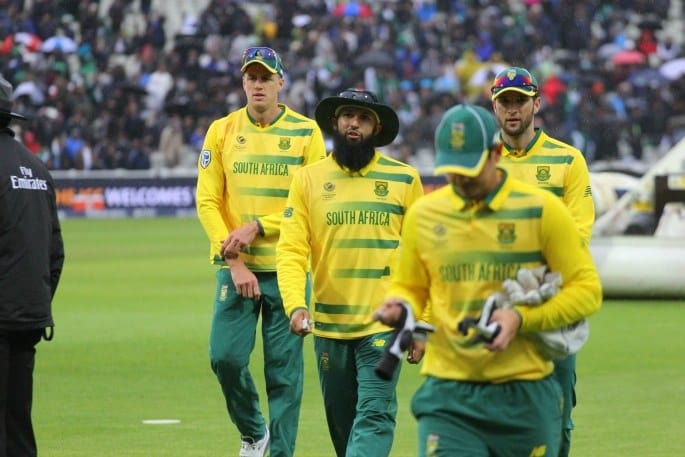 Pakistan will be very happy with the win, but still have some grey areas. Hafeez and Azhar are finding it difficult to rotate the strike.

Pakistan should contemplate replacing Azhar with either Haris Sohail or the potentially exciting all rounder Fahim Ashraf for the remainder of the tournament.

What a funny game cricket is. Pakistan lost so badly against India, yet they have managed to beat the best ranked ODI side in the world. 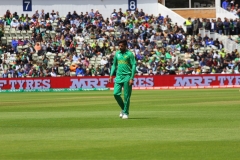 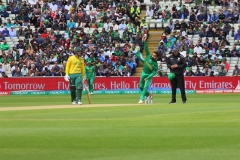 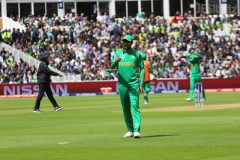 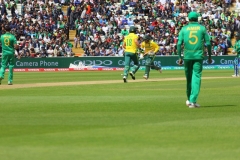 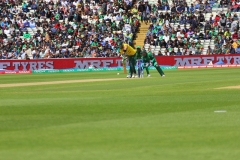 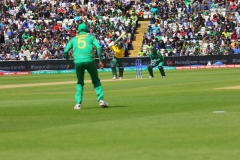 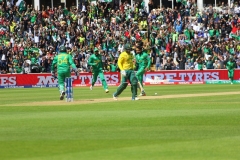 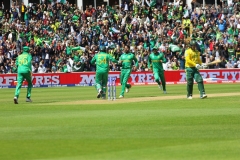 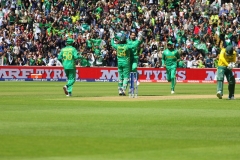 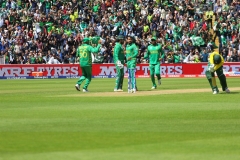 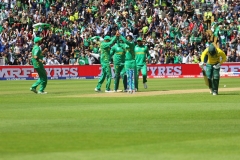 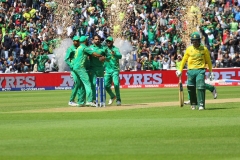 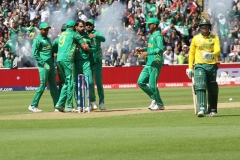 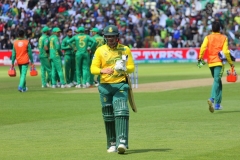 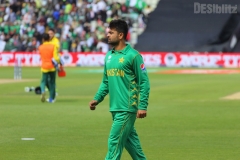 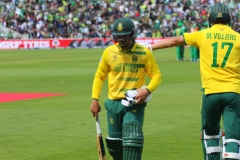 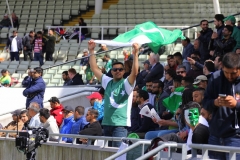 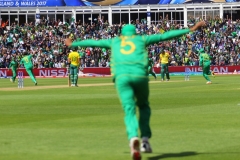 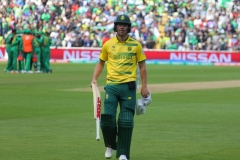 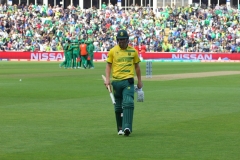