Ben Stokes smashed a century for England as Australia were knocked out of the 2017 ICC Champions Trophy. DESIblitz highlights the match between the two rivals.

"He's [Stokes] always looking to influence the game. Bat, ball or even in the field."

Australia were eliminated from the 2017 ICC Champions Trophy after suffering a huge loss to England at the Edgbaston Cricket Ground on June 10, 2017.

Ben Stokes scored a brilliant hundred as England won the One Day International by 40 runs under the Duckworth/Lewis (D/L) method.

Whenever the two old rivals, Australia and England play each other, it is a mouthwatering prospect for fans and pundits.

It was a fresh pitch at Edgbaston, with overcast conditions due to the gloomy weather around Birmingham.

Prior to this game, England had already made it through to the semi-final. Thus they went into their final Group A match with less pressure.

Meanwhile as Australia’s two previous games were washed out, their main batsmen had not spent much time in the middle. Australian hopes of going further in the tournament rested on this match. 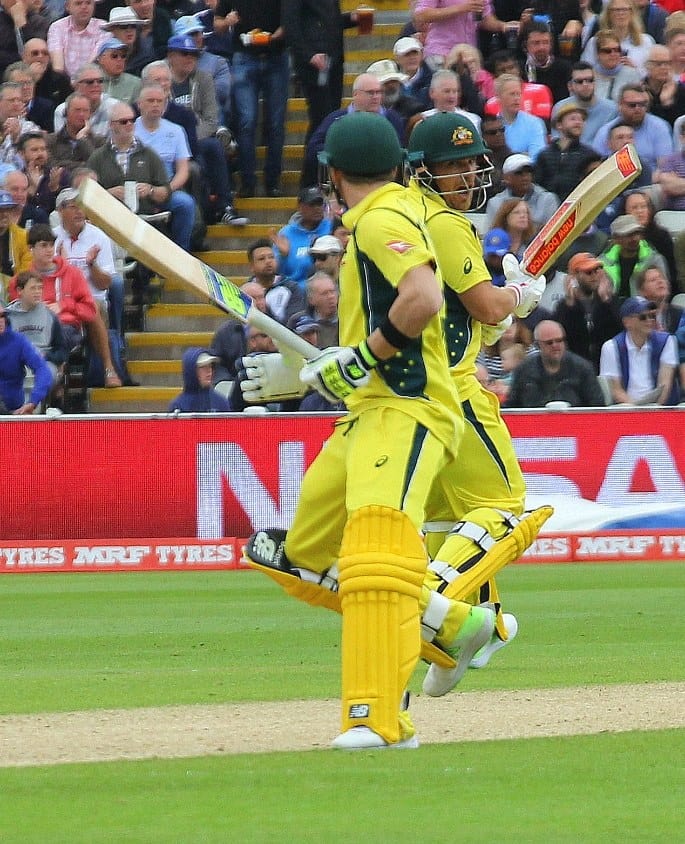 England captain Eoin Morgan won the toss decided to bowl first. Both sides were unchanged from their last two games. Despite being out of form, England did retain Jason Roy.

Kumar Dharmasena (Sri Lanka) and Chris Gaffaney (New Zealand) were out in the middle as the two umpires for the game. The off-field TV umpire was Sundaram Ravi (India).

The teams lined up for the national anthems, before the match began.

After assessing the pitch behaviour, Australian openers David Warner and Aaron Finch got their team to an abrasive start.

Finch in particular hit the middle of the bat as he beautifully stroke the ball down the ground off his front foot.

An inside edge from Warner found wicketkeeper Jos Butler off Mark Wood as he got out cheaply for 21.

Finch and skipper Steven Smith consolidated, accumulating a fifty runs partnership off fifty-two balls by the 16th over.

The following over Finch completed his half-century off forty-seven balls. He hit seven boundaries in his fifty. 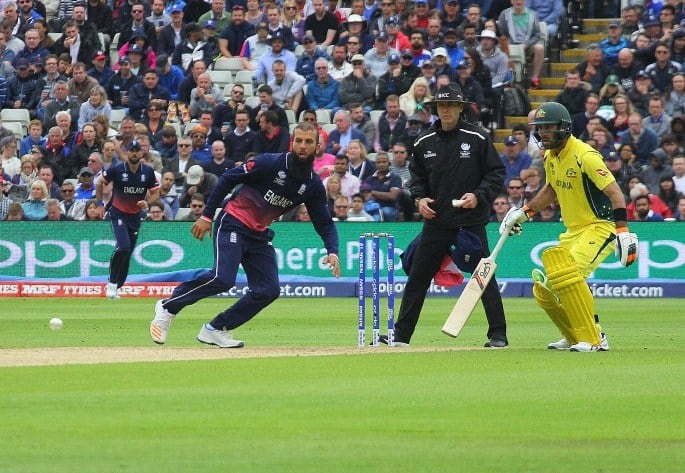 As they say all good things come to an end. Trying to get into top gear, Morgan roaming back took a wonderful catch to dismiss Finch for 68 off Ben Stokes.

Australia’s 150 came up in the 27th over. At this stage, with Smith and Moises Henriques batting together, England’s bowling looked flat.

Averaging very low in ODI cricket, Henriques (17) could not perform yet again. He was caught by Liam Plunkett at mid-on off what might have been a googly from Adil Rashid.

Soon afterwards, Smith reached his fifty off sixty-eight balls. This was Smith’s third fifty against England in 23 ODIs.

Wood got a key breakthrough with the prize wicket of Smith on 68. Plunkett took a simple catch at mid-off to leave Australia 181-4.

The young talented Travis Head then joined Glenn Maxwell at the crease. Maxwell was out next after failing to convert his good start. Roy took a phenomenal catch millimetres from the boundary rope off Wood to send Maxwell packing for 20. 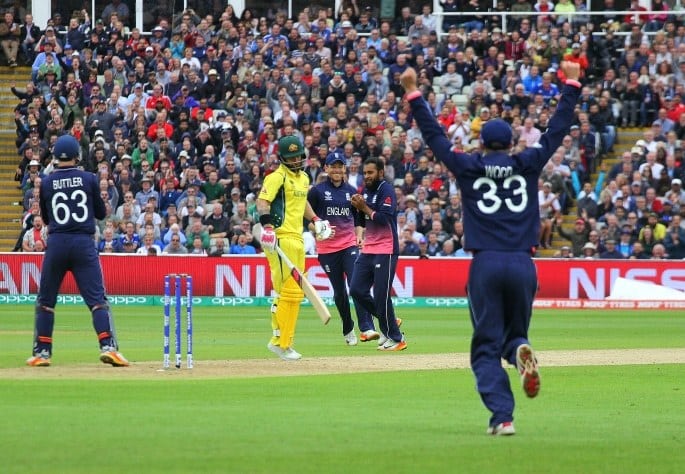 A leading edge off a wrong’un saw the end of wicketkeeper Matthew Wade for 2, caught and bowled by Rashid.

Three balls later, Mitchell Starc scooped the ball straight to Joe Root behind the stumps off Rashid for a Golden Duck.

Neither forward nor back Pat Cummins (4) gave a lollipop catch to Rashid off his own bowling. As Head brought up his fifty, Wood bowled Adam Zampa for nought with a full tosser in the 47th over.

With the last wicket standing for Australia, Head hit some fantastic shots as they managed a relatively below par score of 277-9 in their 50 overs.

Head remained unbeaten on 71 with Josh Hazlewood not out on 1.

Dangerman Wood finished with figures of 4-33. Rashid got a lot of purchase from the pitch, also picking up four wickets for forty-one runs.

Had it not been for so many soft dismissals, Australia might have got 300+. 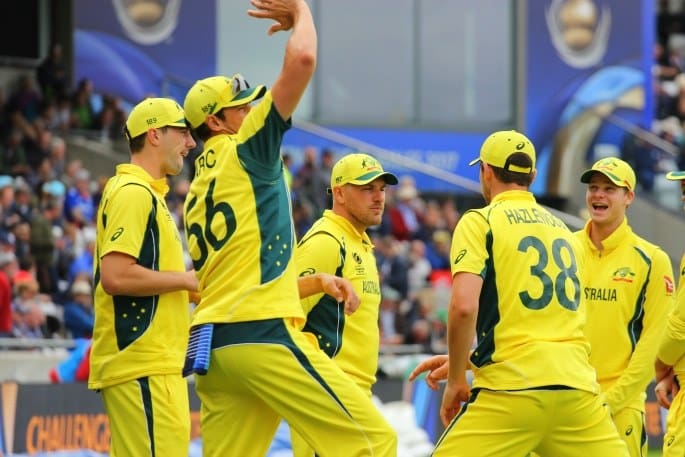 Australia were clearly thirty runs short of a fighting score. In the last few ODIs, the average score batting first at this ground was 298.

Wood spoke about the wicket during the halfway point saying:

“We’re quite satisfied. It’s true bounce, but a little bit slow in the middle of the pitch.”

Defending a modest total, Australia got off to the perfect start. After pulling the first ball for a boundary, Roy (4) was out lbw off the next delivery by Starc.

Nibbling towards the off stump, Alex Hales went for a duck as Finch grabbed a good low catch at slip off Hazlewood. 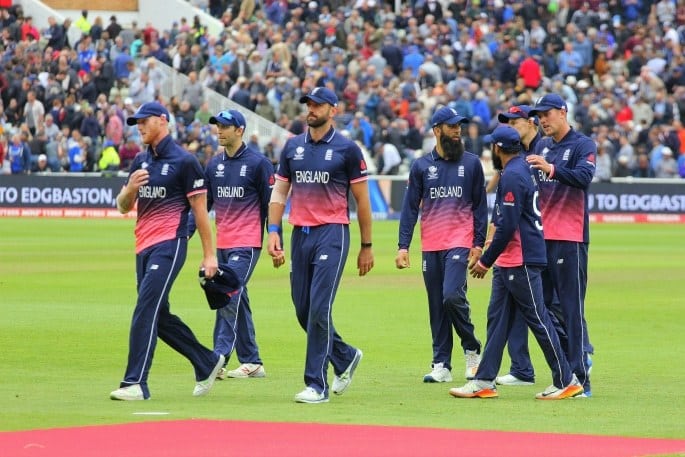 Following the completion of the sixth over, the rain started coming down heavy. Therefore the umpires decided to take the players off the field.

Rain disrupting the match did not seem to be a good omen for Australia as England were reeling on 35-3 at the time.

Thankfully for the spectators watching inside the stadium and everyone viewing at home it was only a short delay. Once the rain stopped and the outfield became slightly drier, players came back onto the ground.

Morgan and Stokes returned to the crease with a very positive attitude.

As they got going they hit a range of delightful and stunning shots. In attacking mood, they dispatched quite a few balls to all corners of the ground. 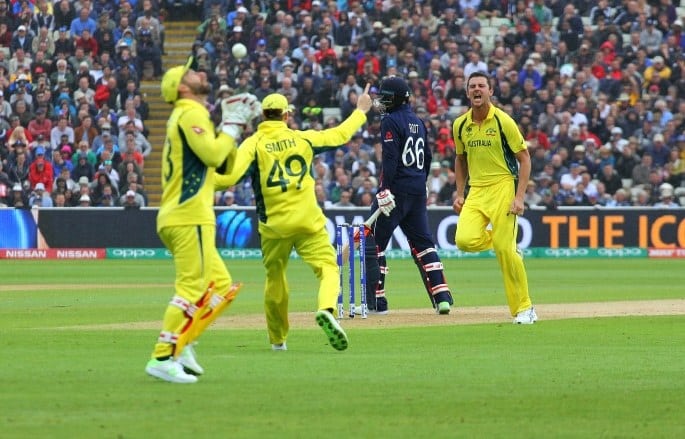 Stokes notched up his fifty in thirty-nine balls, whilst Morgan used fifty-one balls to reach his half-century.

The ball watching Morgan was eventually run out for 87 after a terrific partnership of 159 runs with Stokes.

Following the dismissal of Morgan, Stokes made his century. As Stokes and Butler were cruising along, the rain disrupted play and ended the game.

In a somewhat anti-climax, the match was abandoned by the umpires.

With everything on the line for Australia, the classy English side came on top by 40 runs according to D/L.

At the post game press conference, praising the efforts of his player of the match, Morgan said:

The Baggy Greens could not get all the right elements together to win the game. Hence they did not qualify for the last four.

With England’s victory, Bangladesh finished second place in their group and reached the semi-finals of the 2017 ICC Champions Trophy. 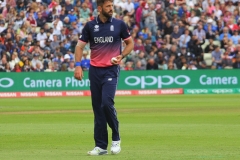 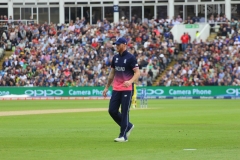 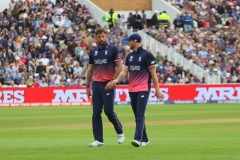 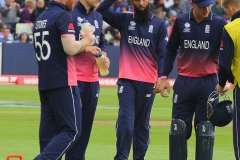 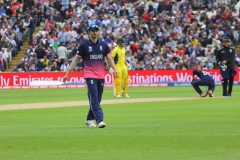 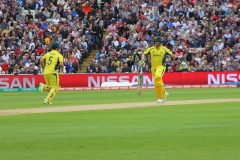 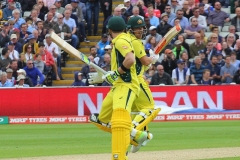 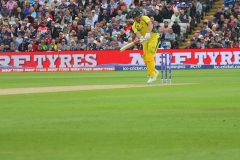 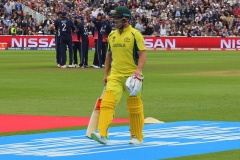 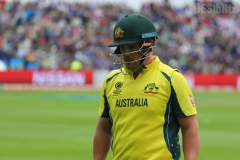 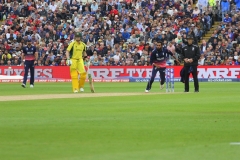 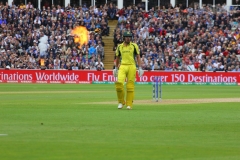 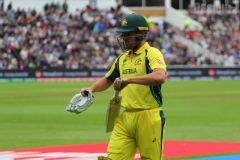 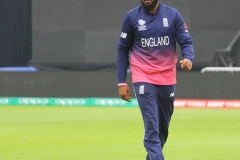 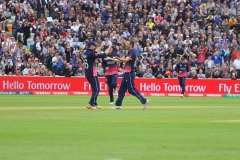 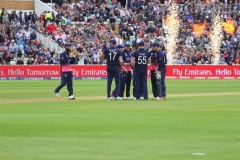 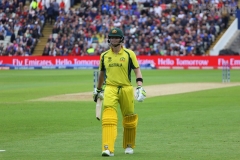 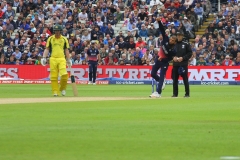 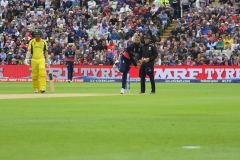 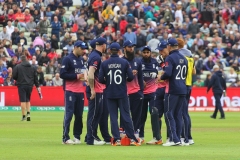