Why do British Asians Love Turkish and Middle Eastern Cuisines?

Colourful cooking of aromatic pleasure, why are Turkish and Middle Eastern cuisines becoming so popular in the UK, especially amongst British Asians?

An increasing number of families from the UK taking holidays in Turkey, could this be making them more likely to choose these dishes when back home?

Beyond Doner Kebab and Falafel, Turkish and Middle Eastern cuisines are the recent cravings amongst British Asians.

Although the spicy Desi food has always carried fascination. But, these colourful ingredients and flavours are flourishing and standing strong on menus.

With a great number of restaurants opening across the UK, Birmingham has also seen a huge rise. From Adana Turkish Grill, Konya’s Gold, Momo’s, to Al Bader, Pasha’s and Sweets House and Arabic Food.

Spreading beyond restaurants, the delicious ingredients are also creeping into grocery store shelves.

UK retailers ASDA and Morrisons have been trying out Turkish groceries, from Rumi Turkish Yoghurt to Tahini sauce and Turkish delight.

These magical flavours have occupied a special place in the hearts of British Asians. But, why are the Turkish and Middle Eastern cuisines so greatly admired? 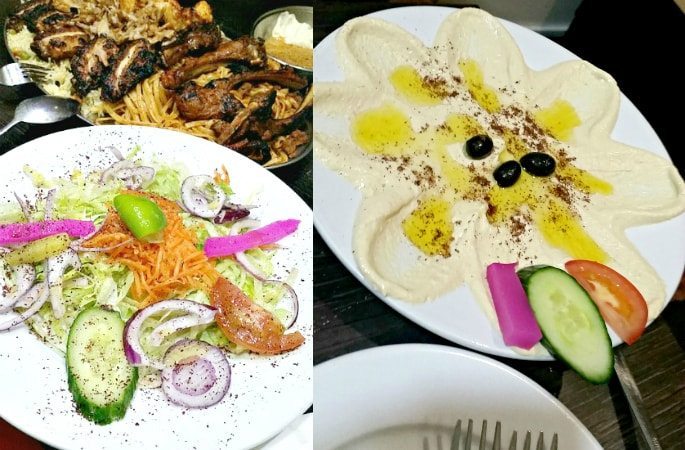 You simply cannot resist the visual appeal of Turkish and Middle Eastern cuisines, with their abundant aromas, tempting the taste buds!

The most eye-catching dish has got to be the family platter, presented on a flat dish, with a perfect diameter for everyone to dig in. And, it becomes a party in the centre of your table!

Decorated in the most mouth-watering way, the dish is served with jewelled rice and spaghetti, which are shimmering with steaming saffron, raisins, vegetables, and nuts. Couscous is also included in this flavour-packed platter.

Along with, a delicious selection of juicy and tasty marinated cubes of lamb, steaks, chops, kebabs, chicken wings and shawarma. All cooked on charcoal grill. 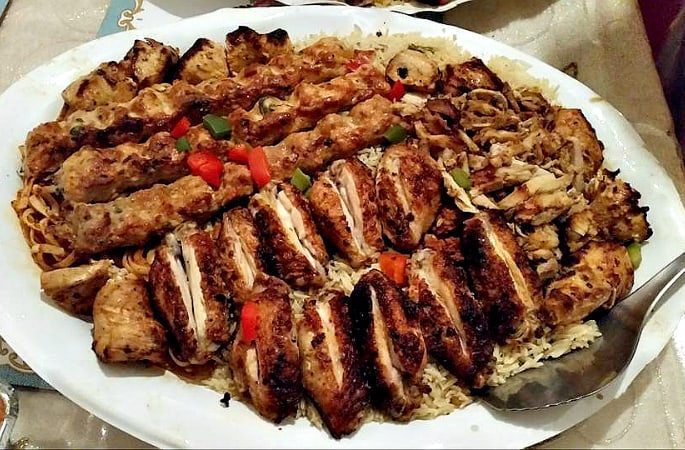 “Before you bite into the food, it is the artful display which makes the cooking so attractive. Whether it’s the manner of slicing the meat or the salad decorations with striking pink radishes. It tastes exactly like the appearance! Whereas our Desi food is swimming in oil.”

The salad ingredients, from Fattoush to Tabbouleh, are considerably more appetising. And appear expensive with arresting colour combinations and seasonings. Otherwise, would you really opt for the salad option at a restaurant?

Hamza Shafiq, a food enthusiast, says Turkish and Middle Eastern cooking is about quality, presentation and service. He truly believes in the visual flavour, especially on a platter:

“If the platter is arranged with one large piece and the rest in smaller shapes. It adds height and visual interest to the food.

“The bigger piece, usually the grilled chicken, becomes one central point. These ingredients and arrangements immediately depict the region where the food originated.” 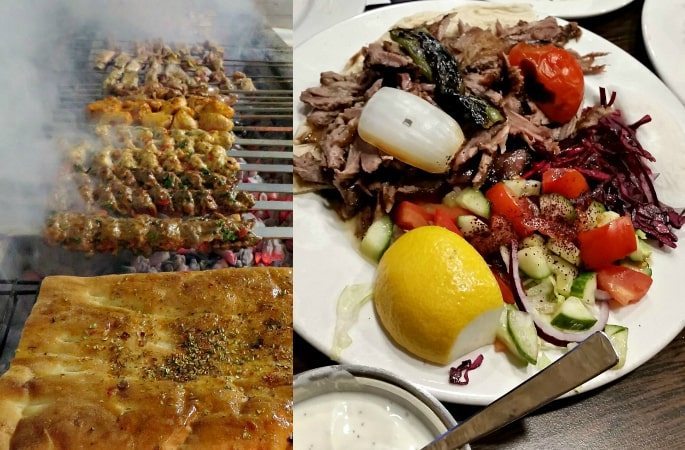 Aside from their captivating appearance and attractive fragrance, the Turkish and Middle Eastern cuisines are prepared with heart-healthy olive oil, pulses and whole grains.

Considerably used throughout the Mediterranean diet, olive oil is a traditional fat, which has been encouraged as the world’s healthiest diets.

As British Asians are now seeking for new and exciting cultural flavours while staying conscious about their health. It is no wonder that Turkish and Middle Eastern cuisines have risen to be one of the fastest growing ethnic food trends.

Samina Yasmin, another regular customer of this mouth-watering eatery, finds the dishes rich and wholesome:

“It is so easy to overindulge and still feel comfortable. But if I was to eat the same amount of Asian food, I would feel sick.

“The enjoyable soft grill, with bread and rice, is different from the food prepared at home,” she says.

Most dishes are healthy because of their main ingredients and cooking methods. Besides olive oil, yoghurt is used in many forms, to marinade the lamb or chicken. As well as, for dips, sauces and salads.

In comparison to the Desi ‘frying’ food preparation, the Turkish and Middle Eastern cuisines are traditionally grilled and barbequed. They are then drizzled with lemon, served with garlic, and sprinkled with dried chilli powder.

Yet, although delightful, the Turkish desserts, including Baklava and various butter pastries, are drenched in oil and calories!

But, a fantastic cup of Turkish tea will surely help balance the syrupy sweetness. 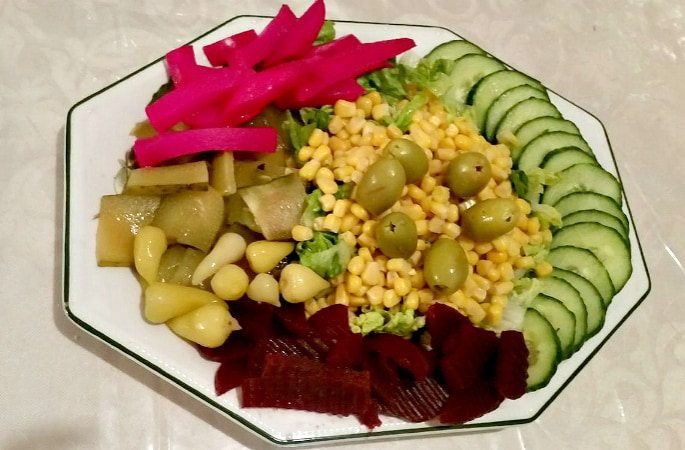 Creative, guilt free eating with a refreshing taste, Turkish and Middle Eastern cuisines are slightly spicy, herbal, cooling and tangy. These touches draw from fresh ingredients such as yoghurt, garlic, red pepper, and oregano, enticing the taste buds with each bite!

“Having roti with daal throughout the week gets boring. So this is a refreshing change from the usual Desi food covered in powdered spices, butter and ghee.

“Especially the cucumber salads, they have a good crunch factor. The yoghurt Ayran drink, and of course the rice, with the easy dip hummus and tahini sauce. It’s no less than a treat for the family,” says Ahsan Khan, another regular customer at a restaurant in Birmingham.

But, is it too Bland, Dry and Tasteless? 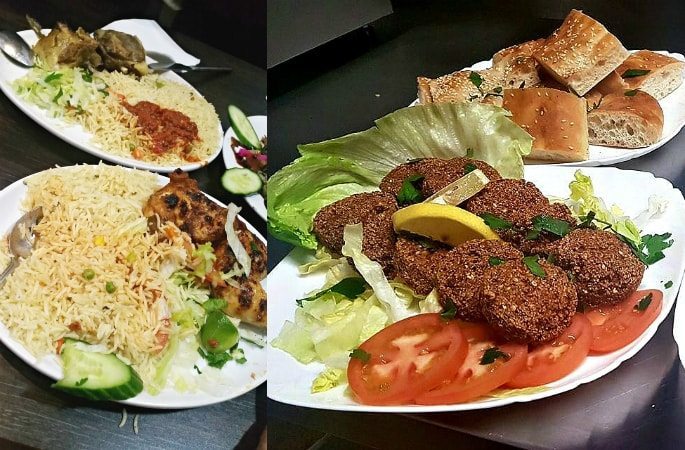 On the other hand, many British Asians simply love their over-cooked, heavy doses of exotic spices, and strong flavours of turmeric and Garam Masala. And hence, find the Turkish and Middle Eastern cuisines completely flavourless.

For British Asian Junaid Masood: “Turkish and Middle Eastern food is perhaps good once in a while. It works on a smaller level with people showing an interest in individual items. The rice, the grill and the salad. Rather than a complete eating lifestyle.”

“The food looks attractive and you expect real flavour, but it’s actually tasteless on the most part.”

Yet, many chefs in the UK are beginning to slightly spice up their dishes.

A chef at Adana Turkish Grill says when we get South Asian customers we add more of a spicy touch and cook the meat for longer.

Turkish and Middle Eastern cuisines aligned with Desi spices have taken on a life of its own. As a result, the British Asian customers with their adventurous palates are experiencing new and inspiring flavours. These interesting and colourful offerings just might be what they are craving!

The Rise of Turkish and Middle Eastern Cuisines

As many people from Turkey and from the Middle Eastern states have immigrated to Britain, this may well be the reason for the rise in popularity of these cuisines.

On the other hand, seeing an increasing number of families from the UK taking holidays in Turkey, could this be making them more likely to choose these dishes when back home?

So could that mean these cuisines are slowly climbing up to the Desi culinary ladder? Or alternatively, are Desi restaurant owners actually restyling their menus, with fresh interiors, to feature a collection of delicious and carefully prepared Turkish and Middle Eastern eatery?

Or perhaps, these specialities are just a healthier alternative to Desi food?

Whatever it is, these juicy grilled treasures are a real treat and full of aroma!

For food lovers, the Turkish and Middle Eastern platters turn out to be a satisfying change from the routine of classic Desi food.