The 2014 Eastern Electronic Festival (EEF) is a cultural event held in Birmingham, the heart of the Asian community. Showcasing the best of British Asian artists from the UK and abroad, the festival will see an incredible range of contemporary and progressive Asian music.

"The festival is designed to showcase the best of British Asian culture; championing music, politics and business."

Currently British Asian sound is limited to traditional sounds of Bollywood, Bhangra and classical music. EEF aims to throw these stereotypes out of the window with its incredible line-up of unique and original musicians, offering instead both ‘contemporary and progressive music’.

Coinciding with this clever idea is the EEF’s theme for 2014 which is ‘Empowerment’. Through different events held across the month of May, the festival will hone in on specific aspects of British Asian music and lifestyle, whether that be women, young adults, new performers or contemporary musicians.

Artistic Director and Curator of the Shaanti show, Sharnita K Athwal explains: “The theme of the festival this year is empowerment, which weaves through all the events. Through EEF talks and workshops, visitors are encouraged to contribute their ideas and raise discussions on difficult topics. It is hoped that their participation will then inspire and empower them to find solutions.”

Sharnita continues: “The festival is designed to showcase the best of British Asian culture; we want to show that we have developed into a nation of high-achievers, championing a variety of sectors like music, politics and business.

“We want the festival to break British Asian stereotypes but at the same time highlight some of the best, undiscovered artists in the contemporary music scene.”

Shaanti itself was founded in 1999 and has been running the EEF for the past three years. Based in the Midlands, it has been continually striving to promote British Asian music and contemporary culture in the UK. Over the years it has been responsible for bringing big artists to the region, including Nitin Sawhney, Talvin Singh, Wiley, Midival Punditz (India), Fun-Da-Mental and the Asian Dub Foundation.

Through the EEF, Shaanti is looking to make a mark by creating a positive message to bring together communities through celebrating South Asian music, Arts and visual communication.

The festival has always had an objective to improve the economy and music practice across the West Midlands region. Using digital, on-line and offline events, Shaanti hopes to reach a mass audience to engage with Birmingham’s biggest contemporary Asian music festival. 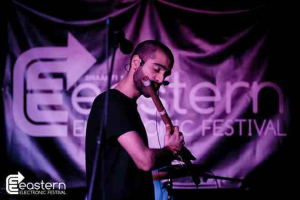 In line with EEF, Shanti have also launched an exclusive Eastern Electronic Music TV Show where fans can listen to a mixture of electronic, punk, classical, contemporary, fusion, nu-jazz and indie-folk Asian sound from the comfort of their homes.

Taking place between 6 and 31 May, the Eastern Electronic Festival will see a whole variety of acts, shows, exhibitions and workshops.

Of them include the on-line exhibition, I Am… An Artist. I Am a Woman, showcasing female contribution to Asian music. Pakistani DJ Ninja will also headline the Taste & Liquor Sessions at Nuvo alongside Hed Kandi’s worldwide resident DJ, Stuart Ojelay.

A number of photographic exhibitions have also been lined up at The Drum. Fans will have a chance to see 20 years of Asian Dub Foundation with rare pictures by official photographer for the band, Coco (Visionary Underground).

There will also be an homage to the future, with a musical showcase of new and contemporary musicians taking over the British Asian scene. Of them include the likes of Nathan ‘Flute Box’ Lee, The Clinic, Arun Ghosh, Sonic Boom featuring Surinder Sandhu, Jason Singh, Abrar Hafiz, Metalheadz, as well as Exit Records music producer, AMIT, and music producer My Panda Shall Fly.

A series of digital workshops and live discussions will also see top British Asian artists reminisce about their musical influences growing up. Steel Bangelz, Evo & RST, Ninja and breakthrough artists LH1 and Vast will take part in the My Music Hero Remix project.

Also recognising international stars, the Pakistani DJ network has put together Electro-Stani, giving a platform for Electronica and EDM artists who have suffered from the recent ban of YouTube in Pakistan.

Taking music to new heights is the creative Music by the Canal show, which will see Midlands, based artists like Raju Mali, Alisha Yasmin Kadir and Amerah Saleh performing new tracks exclusively produced for EEF.

The Shaanti mantra strongly believes in using the opportunity to hold a festival in order to build the Asian community and encourage individuals to strive for the best. As Sharnita says: “Our broader goal is to create the capacity for growth in the musical community at large.

“Increasing the margins for individual artists and bands provides an opportunity for the infrastructure of the music business to develop in Birmingham. We work with our partners to make sure the music we all love can continue to inspire future generations.”

Nadeera is a model/dancer hoping to take her talents further in life. She likes to carry her dance talent in charity functions and is passionate about writing and presenting. Her life motto is: "Live life over the top!"
Raj Parmar the British Asian Dancing Maestro
Diljit Dosanjh ~ Star of Punjab