Seven people, including police and fire officials, have been confirmed dead following a fire at Kolkata’s Eastern Railway headquarters.

"It is a very unfortunate incident.”

A fire at Kolkata’s Eastern Railway headquarters has claimed seven lives, including those of fire and police officials.

According to Fire Minister Sujit Bose, the fire’s victims were going up in an elevator to search for and rescue people.

The deaths were confirmed by Chief Minister Mamata Banerjee.

Banerjee also confirmed that the next of kin of each of the deceased would receive Rs 10 lakh (£9,800) compensation.

Speaking to reporters following the blaze, she said:

“You all know that it is Railways office and a very old one. Seven persons have died.

“Our fire officials, RPF (Railway Protection Force), and the police have lost lives. They were in the elevator and got trapped in the fire. We have recovered charred bodies.

“Though deaths cannot be compensated, yet announcing Rs 10 lakh for the families of the deceased and one government job for a family member. I have enquired, none came.

“Railways are so accountable. We wanted a building plan but did not receive cooperation in that too, I have been informed.

“I do not want to politicise it. The death toll can rise to nine.”

The chief minister then went on to advise people against using elevators in the event of a fire.

“We must be careful. We shouldn’t use lifts when a fire breaks out. It is a very unfortunate incident.” 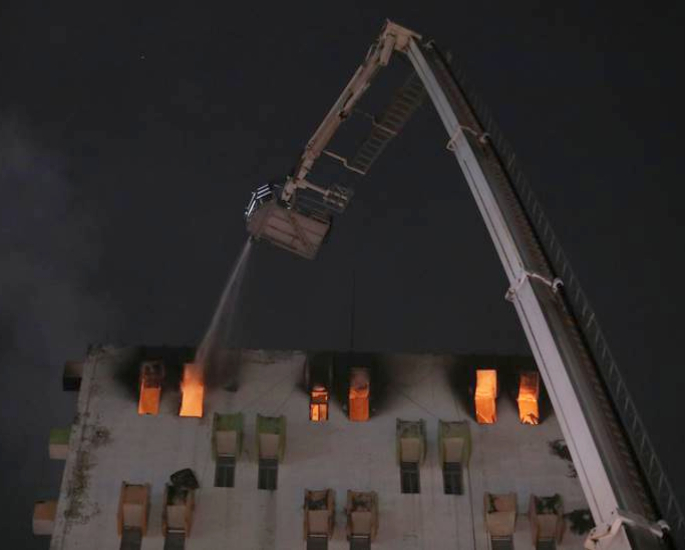 According to the police investigating the fire, the seven victims were originally “missing”.

The seventh victim, an RPF official, could not be identified.

“The incident is very unfortunate, seven persons died. I have been here since evening.

“Twenty-five engines were deployed to douse the first. Those who died were climbing using the elevator.”

According to Kolkata Municipal Corporation administrator and state minister Firhad Hakim, it would only be possible to determine the actual number of deaths or injuries after the rescue team leaves the building.

After the fire erupted, 10 firefighters were immediately sent to the blaze.

Additional tenders to the fire were the officer in charge of the Hare Street police station, additional police, a high radio flying squad and the Kolkata Police’s Disaster Management Team.

According to fire officials, hydraulic ladders and skylifts were used to control the flames, and most of the building’s 14 floors were evacuated in time.

Eastern Railways has since initiated an inquiry into the incident.